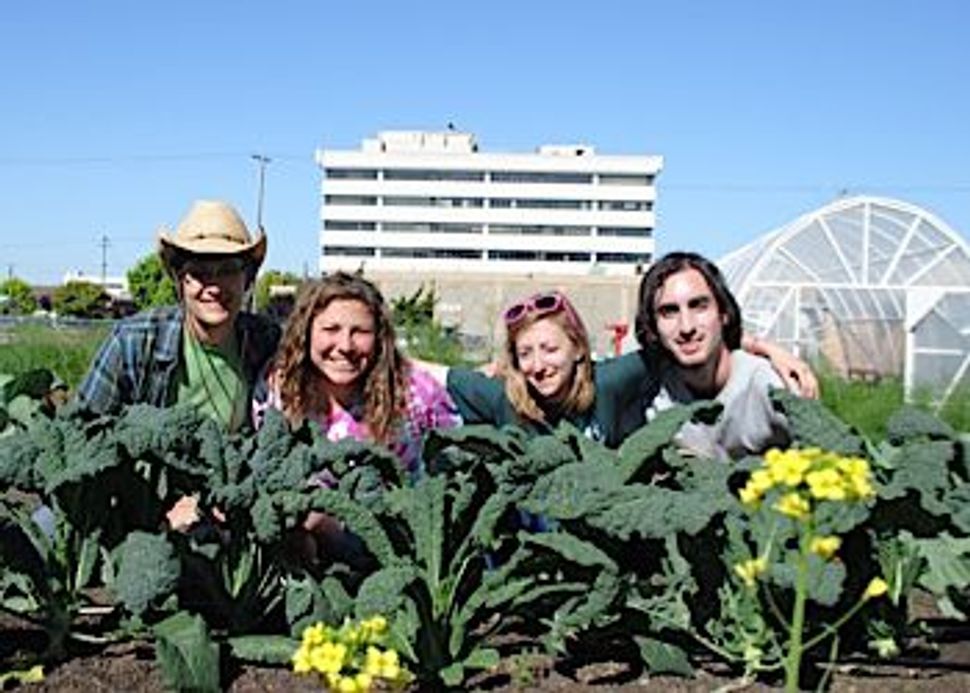 Many people believe that there is no place better to live than a big city, but Adam Berman, Executive Director of Urban Adamah in Berkeley, California, thinks so for different reasons than most. Following his dream to take Adamah: The Jewish Environmental Fellowship “to the next level,” Berman has gathered a dozen like-minded young fellows to help him get the first independent Jewish community urban farm off the ground — literally.

Berman, who founded Adamah in 2003, during his seven years directing the Isabella Freedman Jewish Retreat Center in Connecticut, felt it was important to establish a farming and social justice fellowship in an inner-city setting, where more people would have access to the farm’s produce and programs. The fellows, too, would have greater and more direct access to social justice initiatives addressing what Berman refers to as the “dysfunctional ago-economic system” and related issues of poverty and food security.

(Watch the video below, in which Urban Adamah fellows show how to grow food in an urban area.)

Urban Adamah intends to harvest around 8,000 pounds of produce for local food banks and homeless shelter kitchens this year. The farm’s first cohort of fellows are spending this summer building the infrastructure and creating the operational systems for the West Berkeley one-acre site, constructed of above ground portable beds for growing vegetables. Berman hopes that the innovative agricultural methods Urban Adamah comes up with will provide solutions and become a replicable model for Jewish communities in other cities nationwide.

Many hands-on educational programs for groups from local Jewish and non-Jewish schools and organizations will take place on-site, but the non-profit’s centerpiece is its 12-week fellowship program. Three times a year, a group of young adults ages 20-29 will be chosen to live in a communal home near the farm, learn the art and science of sustainable agriculture, engage in Jewish study and spirituality, help run the farm’s educational programs, and intern with local food security and environmental justice organizations.

Urban Adamah opened this summer with 8 female and 4 male fellows hailing from different cities up and down the East and West coasts of the U.S., and with varying educational, professional and Jewish backgrounds. Four members of this first cohort spoke with The Jew and the Carrot, sharing their personal stories about how they found their way to the farm.

It was evident that for some of these young individuals, the fellowship was a perfect match for their ongoing interests in social justice and food security. Twenty-year-old Stanford University junior Aliza Gazek’s academic focus is on social and structural change through community action. Robin Haguewood, a 26-year-old Seattle native and Berkeley resident with a Masters in Public Health from San Francisco State University studied food systems and human and environmental health.

Having grown up in Santa Cruz, California, Gazek was surrounded by agriculture. Her personal experiences have led her to believe strongly in the tenets of eco-kashrut and to be concerned about the need for accessibility of all people to healthy food. “I’m most excited about the permaculture classes we will have, which will be about how to design agriculture for sustainability,” she shared. Haguewood, who has already completed a course for certification in permaculture, is eager to “get back to playing in the dirt,” after having had her nose in the books for the past couple of years.

For other fellows, the draw of the fellowship was its potential for taking them out of their comfort zones and introducing them to farm life for the first time. East Coaster Eric Himmelfarb, who graduated from Georgetown University in 2009 and is now pursuing a Masters in creative writing at City College, sees the fellowship as “a catalyst for a new path for me.” He grew up with parents who always stressed the importance of tikkun olam. But, “where I come from,” he said, “people are disconnected from where their food comes from.” He is excited by the possibility of making change in the world through food justice. “This is all new for me, and it’s really challenging me and taking me on a journey.”

Fellow East Coaster Talia Grossman, also feels that she is being stretched in positive ways. While the “adamah” (earth, soil) part is not new for the University of Massachusetts at Amherst junior, the “urban” part certainly is. Once a week, she and four of her colleagues bike to the food desert of West Oakland to intern at City Slicker Farms. “This is about stretching yourself through new experiences, about learning how to be comfortable going to high-stress, inner-city areas so you can go there and empower people to help themselves,” Grossman reflected.

Haguewood, the only local in the group, and also the eldest and the only married fellow in the cohort, recalls passing by the vacant lot that is now Urban Adamah and anticipating what the land might be used for. A firm believer in the healing power of green spaces in the urban environment, she was thrilled to learn that Urban Adamah was coming to town and wanted to be part of it.

She is thankful to have been chosen to be a pioneer for the organization and sees the experience as a steppingstone toward hopefully one day starting her own food justice organization. “It’s exciting to be here at the beginning. There is a lot to be learn and we will be able to look back and see that we will have created a legacy.”