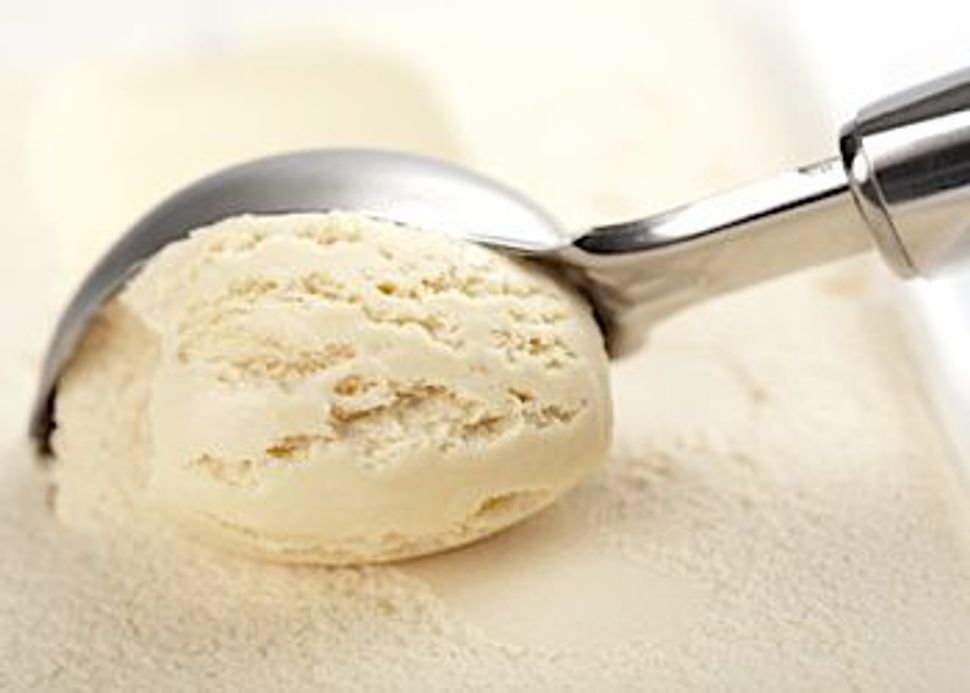 It all started when I tried to make a “Jewish” ice cream flavor. Is there such a thing? I thought about milk and honey ice cream (too cliched); date and pomegranate ice cream (more Israeli than Jewish); even ricotta-brown sugar ice cream, supposedly inspired by kugel (such a stretch!). The ideas, they didn’t come so quickly. I was stuck. But it’s National Ice Cream Month and I had committed to being part JCarrot’s Frozen Fridays. So there was no way out: I’d be figuring out a Jewish ice cream flavor, yes I would.

Just when I thought I was out of ideas, I remembered the one Jewish food that was a staple of my childhood. Not only is it quintessentially Jewish, it’s delicious — and a perfect inspiration for an ice cream flavor. But I’m getting ahead of myself.

See, I grew up in a house where weekday breakfast was on the straight and narrow. Special K and Cheerios only: no Golden Grahams or Cinnamon Toast Crunch from Monday through Friday. I could barely wait for those sweet squares to pass my lips on Saturday morning, feeling downright giddy as I skipped to synagogue, fueled by…let’s face it: pure sugar.

As excited as I got about sweet cereal, there was something even better. I’m talking about Green’s Babka. The stuff was legendary. It was layers and layers of paper-thin dough, still chewy from being packaged warm, and sandwiching so much cinnamon or chocolate goo you hardly knew where to start.

For me, Green’s is a thing of the past. I haven’t had a slice in years. I’ve made my own babka (and you can too!), and it was amazing, but nothing compares to those thin, perfect layers of dough-filling-dough action that Green’s had in spades. Green’s, I resign. You win.

The real question any lover of babka must ask herself is, cinnamon or chocolate: which is better? Equally important: are you a dough person or a filling person? You can only be one. For me, if we’re talking Green’s (and not homemade brioche dough), it’s all about the filling, and cinnamon is definitely my favorite. The stuff tastes like the inside of a sticky bun. It’s gently spiced, caramel-y and sweet — it’s irresistible. So I got to thinking about ways to fold that cinnamon flavor into something else. As a lover of ice cream in any available form, it seemed only fitting to try my hand at a babka-inspired ice cream.

My initial plan was to use a vanilla ice cream base, but I was concerned the ice cream would end up too sweet. Then I got back to thinking about sticky buns, which have a tangy cream cheese frosting that brings that sweet cinnamon filling into balance. Having attached to the tangy-sweet combination, I turned to Alice Medrich’s sour cream ice cream recipe, which is both delicious and incredibly easy to make. That recipe yields a pretty tart ice cream, perfect for my babka-inspired swirl. Green’s may not make regular appearances on my counter on Saturday mornings, but this ice cream will be a staple of many a future Shabbat lunch.

Cinnamon Swirl Ice Cream
Adapted from Alice Medrich and from this Gourmet recipe, and inspired by Green’s Babka

In a small saucepan, combine the sugar, cornstarch, and salt. Whisk in a little of the milk to form a smooth paste, then whisk in the remaining milk slowly to ensure a smooth mixture. Whisk constantly over medium heat until the mixture is warm and foamy, about 5 minutes.

Continue to whisk as the foam subsides and the mixture thickens and begins to boil. Boil steadily for 1 1/2 to 2 minutes, whisking constantly and scraping the sides of the saucepan, until the mixture thins slightly and becomes somewhat translucent. Do not undercook the milk mixture: raw cornstarch has a very unpleasant taste and texture, and if undercooked, it will mask the sour cream flavor.

Remove the pan from the stove and whisk for a few seconds to cool slightly. Meanwhile, put the sour cream into a large bowl, and carefully ladle the hot mixture into the sour cream gradually, whisking after each addition. Let cool, then cover tightly and refrigerate until thoroughly chilled, at least 4 hours but preferably overnight.

In a large, heavy-bottomed pan, boil sugar, corn syrup, water, and a pinch of salt over medium heat, stirring constantly, until sugar is dissolved. Once sugar has dissolved, stop stirring. Boil mixture, gently swirling pan constantly, until mixture turns a deep shade of brown. Remove pan from the heat and carefully pour cream and vanilla down side of pan (mixture will bubble up and caramel will seize). Add cinnamon. Simmer mixture, stirring, until caramel has once again dissolved, about 2 minutes. Remove pan from the heat and cool the caramel.