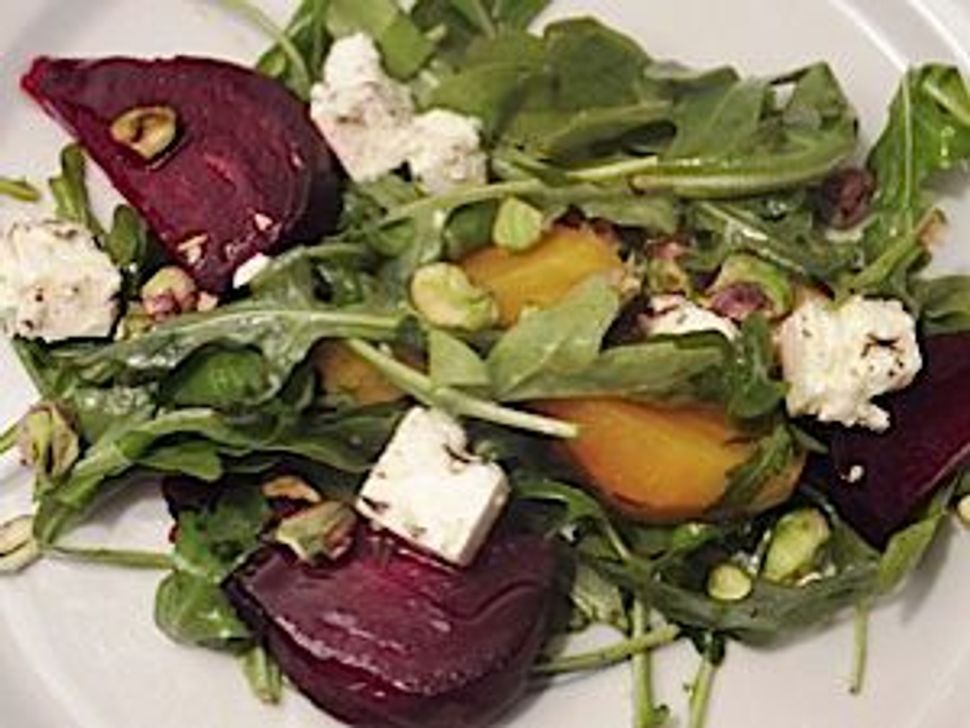 Of all the salads that you can find in New York City restaurants today, none is more ubiquitous than the beet and cheese variety. Which makes it all the more surprising that I had never eaten it until I was a teenager.

Despite the prevalence of beets in the Ashkenazi Eastern European culinary traditions of my ancestors, they were banned from my family’s dinner table. My father hated the ruby spheres, so we never ate them.

Imagine my delight when I first tasted the sweet, robust flavor of a perfectly roasted beet. I sighed. How had I been robbed of this pleasure for so long?

While I associate winter Shabbat meals with braises and brisket, when it comes to festive cooking in the summer, I am reminded of the Shabbats I spent living in Tel Aviv two years ago. There, my friends and I gathered and assembled fresh salads, consuming them as the sun set a brilliant orange over the Mediterranean.

An apprenticeship in the kitchen at Carmella Bistro had brought me to Tel Aviv, but I initially didn’t know a single soul in the city. Luckily, however, a friend in New York had lived there the year before and asked her friends to befriend me immediately. And one girl, Kate, promptly invited me to her house for a vegetarian dinner party on Shabbat.

Not a terribly observant Jew back in New York, I was at first nervous about my inability to read or speak Hebrew or recite any of the prayers. But after I arrived, I saw that it wasn’t an overly formal occasion at all; it was more a way of bringing together friends to share the season’s bounty and celebrate community.

Since then, I always think of Kate’s veggie-friendly fare on Shabbat, and I think she would have enjoyed a salad I prepared recently for the holiday. I use both red and golden beets (my favorite), and this rendition updates the ubiquitous version found all across New York. The dish also showcases the foods that I fell in love with while living in Tel Aviv, namely pomegranate molasses.

I had never cooked with it before I worked at Carmella Bistro, where I was responsible for the appetizer station. This meant I prepared several salads — including the restaurant’s famed herb salad, made from chopped parsley, cilantro, mint, arugula, and toasted cashews, tossed in a lemon-olive oil dressing — plus a couple of hot dishes. One evening as a special, we ran a halloumi cheese and arugula salad with a za’atar-honey dressing. My salad incorporates some of these same flavors, yet another reminder of my cooking in the land of milk and honey.

When the salad is finally assembled on the plate, you’ll discover a marvelous symphony of flavors and textures, a perfect dish for a warm summer evening. It would definitely pass muster with Kate, I think. And it might even pass muster with my father.

If serving as a salad course, an entrée of couscous with spicy roasted Mediterranean vegetables would make for an ideal next course. I find summer’s vegetables make vegetarian dining a joy.

1) Place the feta in a small container and sprinkle with the za’atar. Cover with the olive oil, toss until coated, then set aside to marinate at room temperature.

2) Wrap the beets in foil and place on a baking sheet. Bake for about 1 hour and 15 minutes, or until the beets are fully cooked. To test for doneness, unwrap the foil and insert a knife into one of the beets. If the beet slips off, it’s done. Remove the beets, then place the pistachios on a baking sheet and toast at the same temperature for five minutes. Set aside and chop roughly.

3) Meanwhile, cut the top off the beets and peel the beets (you may want to wear gloves). Slice into wedges, then let cool completely in the refrigerator (you can speed up the cooling process by cooling them in the freezer).

5) Divide this mixture among four plates, then top with the red beets. Sprinkle with the feta and pistachios. Serve immediately.

Lauren Shockey is the author of “Four Kitchens”, a culinary memoir that recounts the year she spent working in restaurants around the world. She is also a Staff Writer at the Village Voice, where she writes a weekly restaurant review and blogs daily. A graduate of the University of Chicago, she holds a diploma from the French Culinary Institute and a Master of Arts in Food Studies from NYU.