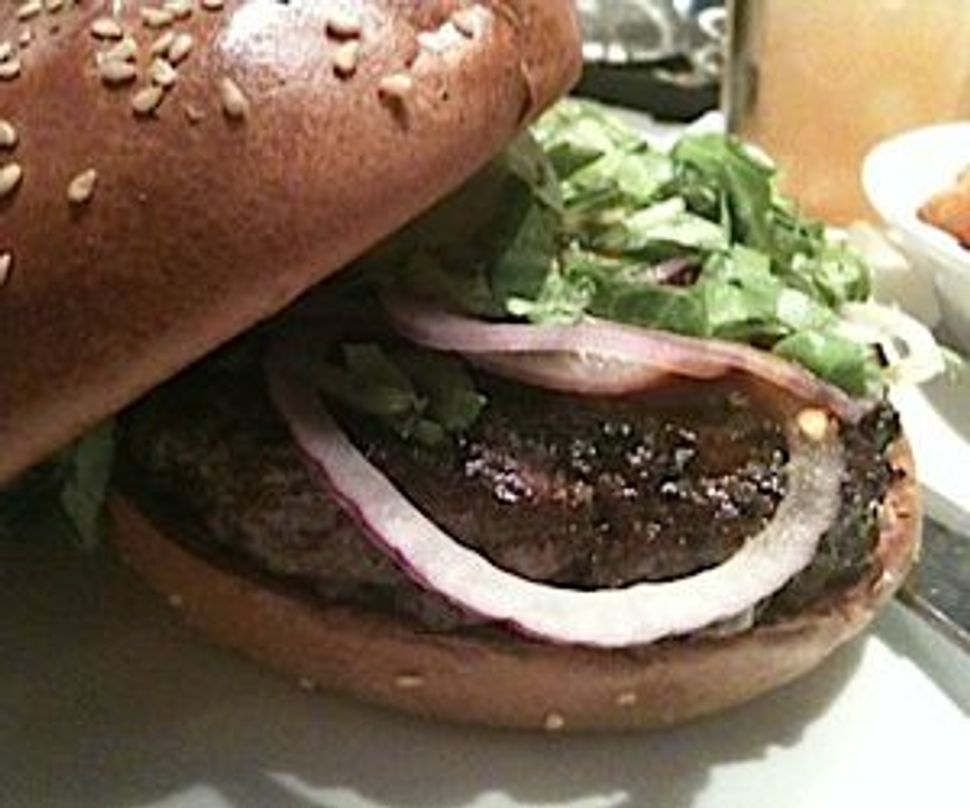 A burger from Moses, a burger bar in Israel. Image by Allison Kaplan Sommers

When McDonald’s first came to Israel in 1993, they encountered a native population relatively unfamiliar with the ways of the hamburger. Israelis were grateful that after years of cooperating with the Arab boycott, the multinational giant finally reached the Holy Land, and made them feel like part of the international community. They accepted the flat well-done burgers and cottony buns they were served, and assumed that this was the be-all and end-all of the American burger experience. They proved a tremendous success and easily dominated their fast-food competitors — Burger King, which left Israel with its tail between its legs a year ago, and the local chain, Burger Ranch, which survives in the shadow of the golden arches.

But as the years went by, Israelis became better traveled and familiar with the ways of the world, they started demanding local versions of the juicy and delicious burgers they enjoyed in New York and Los Angeles. Over the past decade, both low-rent and upscale high-quality burger-oriented bistros have popped up all over the country, some of them quickly blossoming into sophisticated bar-and-burger chains. High-end steakhouses began putting burgers on their menus, too. No longer innocent to the temptations of the high quality burger, Israelis began to fancy themselves connoisseurs, and started turning up their nose at McDonald’s, dropping in only to buy their kids Happy Meals.

Now, McDonald’s Israel is fighting back against the upscale chains that have grabbed 20-30% of the burger market, a worrisome development for the company. With much fanfare, they recently debuted new premium burgers which they brag are made of nearly half a pound of prime rib and entrecote steak. Titled “the Big America series,” one is a classic New York burger topped with lettuce, tomato and raw onion and the other a barbecue-style Big Texas Burger featuring “Texas sauce” and sautéed onions. The new burgers cost $9.50 alone or $14.50 with a beverage and fries — pricey for McDonald’s, but cheaper than some of the mega-burgers that have caught Israeli’s fancy.

The Jew and the Carrot taste-tested the Big Texas Burger and walked away very unimpressed. While the chain’s advertisements do, in fact feature a very impressive thick burger, the real thing seemed to be large in width, but not in thickness. The restaurants they are competing with always ask how the customer wants its burger done. While the meat was of good quality and tasty, the Big Texas Burger patty still had the well-well-done-cooked-within-an-inch-of-its-life-without-a-hint-of-pink doneness that one has come to expect in McDonald’s. Not even Kobe beef could survive that level of doneness. The sautéed onions promise on the burger are scarce, and so thin as to be transparent, and the “Texas sauce” is thin and unimpressive. Since the burger alone was over 600 calories, this reviewer decided to forgo the fries, and instead was served with the least tasty chopped Israeli salad she has ever tasted.

In any case, the battle of the burgers is on and in honor of the new competition, here are the best of the new wave of burger-centric restaurants which McDonald’s is taking on:

Celebrity chef Tsachi Buchester boldly declares that he provides “The best burger in town. Any town.” His extravagant restaurants feature sophisticated lighting and a lively bar business, and excellent burgers in various sizes with cheeky movie-star pop-culture names names like “Schwarzenegger” (a meaty burger) “Twiggy” (a thin burger) “Brigitte Bardot” (vegetarian burger) and “Popeye” (spinach burger). If you are truly hungry, the best choice is the T-Rex, the largest burger. Or, for a bit of the Middle East, there is a lamb burger served with tehina and a touch of chili. Creative toppings offered on any burger include hot chili slices, pineapple, or, an Israeli favorite – a sunnyside up fried egg. The chain has grown to twelve outlets, and has reached out beyond the greater Tel Aviv bubble to locations like Jerusalem and Beersheva. Black stands out among upscale chains not only because of its geographic reach, but because some of its restaurants are kosher.

Unquestionably, one of the tastiest burgers in Israel is the Moses Art Burger, a sophisticated blend of beef, lamb and veal topped with a tangle of high-end lettuce. Moses, which first opened in Herzilia in 2005 and now has seven outlets, makes its burger even tastier by adding a special house ketchup made out of red peppers that leaves Heinz in the dust. Its bartenders also make a mean mojito. After quick and tremendous success across Israel, they are about to go international, preparing to open a restaurant in Barcelona, Spain.

The Israeli pioneer of the burger-centric concept, this restaurant started as a small, but tremendously popular burger joint on Tel Aviv’s bustling Nachalat Binyamin in 1997, and, gradually expanded over the years, with five very successful restaurants in greater Tel Aviv, two of them exotically themed as “Agadir Hotel” and “Agadir Resort” (They don’t really provide rooms, but the restaurant tries to make you feel like you are taking a little vacation and are dining in a hotel lounge.) Their burgers — the best are the “Angus” which is pure ground entrecote steak and the “Diana,” a blend of beef and lamb — are big and juicy with a real contrast between the seared and crisp outside and pink and juicy center.

Foodie aficionados who don’t keep kosher may look down their nose at this chain, but for those who want an excellent kosher burger at a reasonable price (important if a large family is going out for a treat), this is the place. Its chicken sandwiches and salads are very good, as well, and since all of the 30 branches across the country are kosher, they do a bang-up take-out and delivery business. With prices roughly equivalent to the new McDonald’s line, they offer better quality at the same cost. Of the Israeli chains, they are the only ones to have made inroads in the U.S., with kosher burger restaurants in Cedarhurst, NY and Teaneck, NJ.

Another reliable, but inexpensive stop for a high-quality thick and juicy burger, with topping options that include ‘asado chimichurri’ and ‘pineapple chili’, at 13 outlets across the country. None of the Burgus branches are officially certified kosher, but several of them declare themselves “kosher with no certificate” meaning that they are open on Shabbat, but keep their kitchen fully kosher, so there is no issue of encountering cheeseburgers — with or without bacon.

It is a sad reality for Orthodox burger-lovers that the very best of the burger outlets in Israel do not have kosher certificates. For most, it is a business decision — they simply can’t afford to close on Shabbat and lose the weekend business. Some, having given up the kosher certification, go the whole hog and offer burgers dripping with cheese and bacon. Others choose not to alienate traditional, but not Orthodox burger fans, and while they do offer cheeseburgers, they draw the line at pork and shellfish, providing thinly sliced goose breast as a bacon-y substitute to sit atop their burgers.