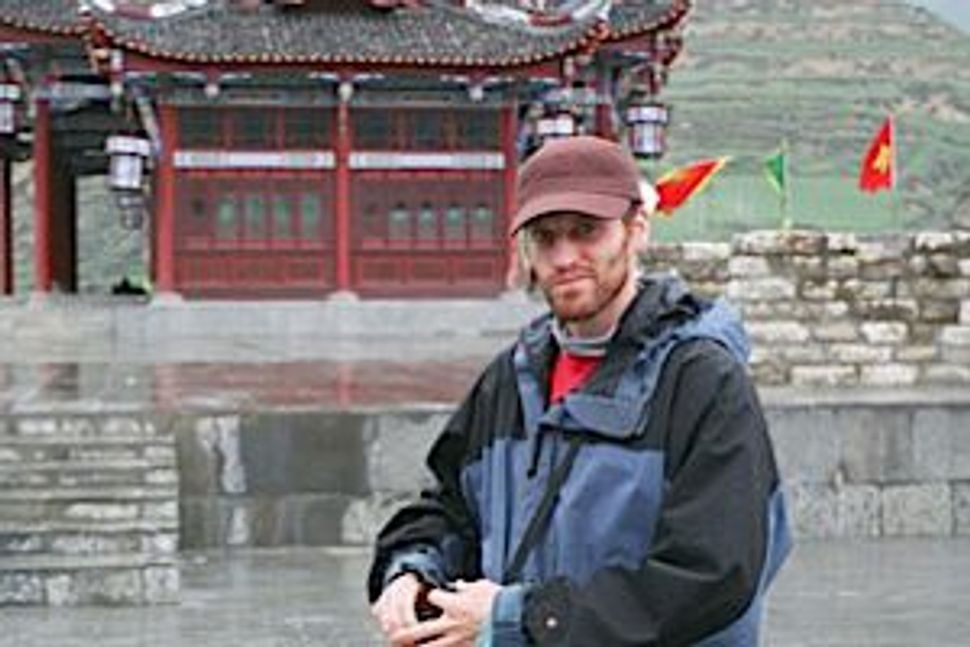 On one occasion, Michael Levy just had to say no. While he would try eating dog in China, fried millipedes was just taking it too far. This culinary experience opens the preface to “Kosher Chinese: Living, Teaching, and Eating with China’s Other Billion,” a book about Levy’s two-year stint living in rural China while serving the Peace Corps. The 35-year-old had traveled deep into the interior of China to teach English and learn first-hand about another culture.

Last month, Levy stood before an audience at BookCourt, an independent book store in Brooklyn, where he spoke about his two-year Chinese sojourn. A history teacher at the local Saint Ann’s School, Levy opened his presentation by handing out a quiz for the audience to test how much they knew about China. The Forward caught up with Levy last week by phone to discuss “real Chinese food” vs. American Chinese food, why he was constantly compared to Karl Marx and learning to play mahjong.

Gary Shapiro: What was it like being a Jew in rural China?

Michael Levy: No one I encountered in Guiyang had ever met a Jewish person. Their assumption of a typical American was that he was fat, Christian and loud-mouthed. Instead they got this skinny, introverted Jew.

You mention Karl Marx in your book. What is that all about?

Every single time I told one of my Chinese friends I was Jewish, there would be a pause, and they would say “Ah, just like Comrade Marx”…to them, he was the ultimate Jew. He is revered in China. There was a picture of him behind me when I taught, along with Mao and Lenin.

You had some pretty wild food experiences while you were over there and I read that you used to keep kosher. In your book, you recount eating dog while in China. That’s certainly not kosher.

The dilemma was when to be my American self which was vegetarian and kosher, and when to try to immerse myself in every aspect of Guizhou culture. At the time, I decided to be very flexible and that meant eating whatever was served. My colleagues were skeptical of matzo balls. I was skeptical of dog meat. But they tried the matzo balls, so I felt I had to return the cultural favor.

But fried millipedes was taking it too far?

I had just arrived in China and mumbled something like “Jews can’t eat millipedes. We have a lot of rules.”…I spent basically the entire time in China suffering an identity crisis and I was never able to reconcile two ideals: being a good guest on the one hand and being true to myself on the other.

You ate some pretty unusual things. What was red-sauce porcupine like?

Were its sharp spines visible when it was served?

The porcupine was unrecognizable. It looked like any other meat on the table.

You write about eating at Pizza Hut in Guiyang. Was it any good?

There was a Pizza Hut in the middle of the city. When my parents came to visit, they took me to there. It was too expensive on my Peace Corps stipend, which was about 100 dollars a month. What we were served was recognizably pizza, but not very good. The last time I had eaten at Pizza Hut was at my eighth grade classmate Adam Goldberg’s birthday party. They had an all you can eat buffet, and he went overboard, ate too much, and threw up.

Closer to home, what do you think of Chinese food in America?

In America, it is not the real thing. We can call it Chinese food, but it is not the same as food in China. The difference is in China every animal is fair game and everything is spicy.

Tell me about the kosher cooking club that was started at the university.

My colleagues and students were trying to be good hosts and make me feel comfortable. They were just trying to be polite. My students tried everything from potato latkes to brisket. They didn’t really like the Jewish food.

What were your interactions with your students like? What did you teach?

My main job was teaching undergraduates conversational English but I got to teach one post-graduate course, which was on post-modern American literature. We read Thomas Pynchon, Don DeLillo, Kurt Vonnegut and others. What they loved most was poetry so we read Charles Bukowski and Allen Ginsberg.

Ginsberg in China? A Beat poet?

They were amazed that Ginsberg could be both patriotic and critical of America at the same time.

From your book, you recount how your students sought you out to talk about religion and spirituality.

They mostly wanted to talk about American pop culture, or sports like the NBA. A close second was deeply spiritual and religious questions. My students were spiritually curious but couldn’t talk to their parents or the other teachers about this. The reason for this was residual Maoism, which is forcibly atheistic.

What other subjects did they want to talk to you about?

Love was another forbidden topic. The reason is because under Chairman Mao, you could only love Chairman Mao.

Your mentor Jennifer was interested in why Jews fast for Yom Kippur. Can you tell us about that?

She was very typical of the young generation yearning for some sort of meaning, and the only meaning she was ever exposed to was Communism. But she knew it was hollow. So, she meets this American guy who finds meaning in Judaism and she was really attracted to it.

What did you do for fun? Did you play mahjong?

I’m the only 35-year-old Jew who could go to Boca Raton and beat all the ladies.