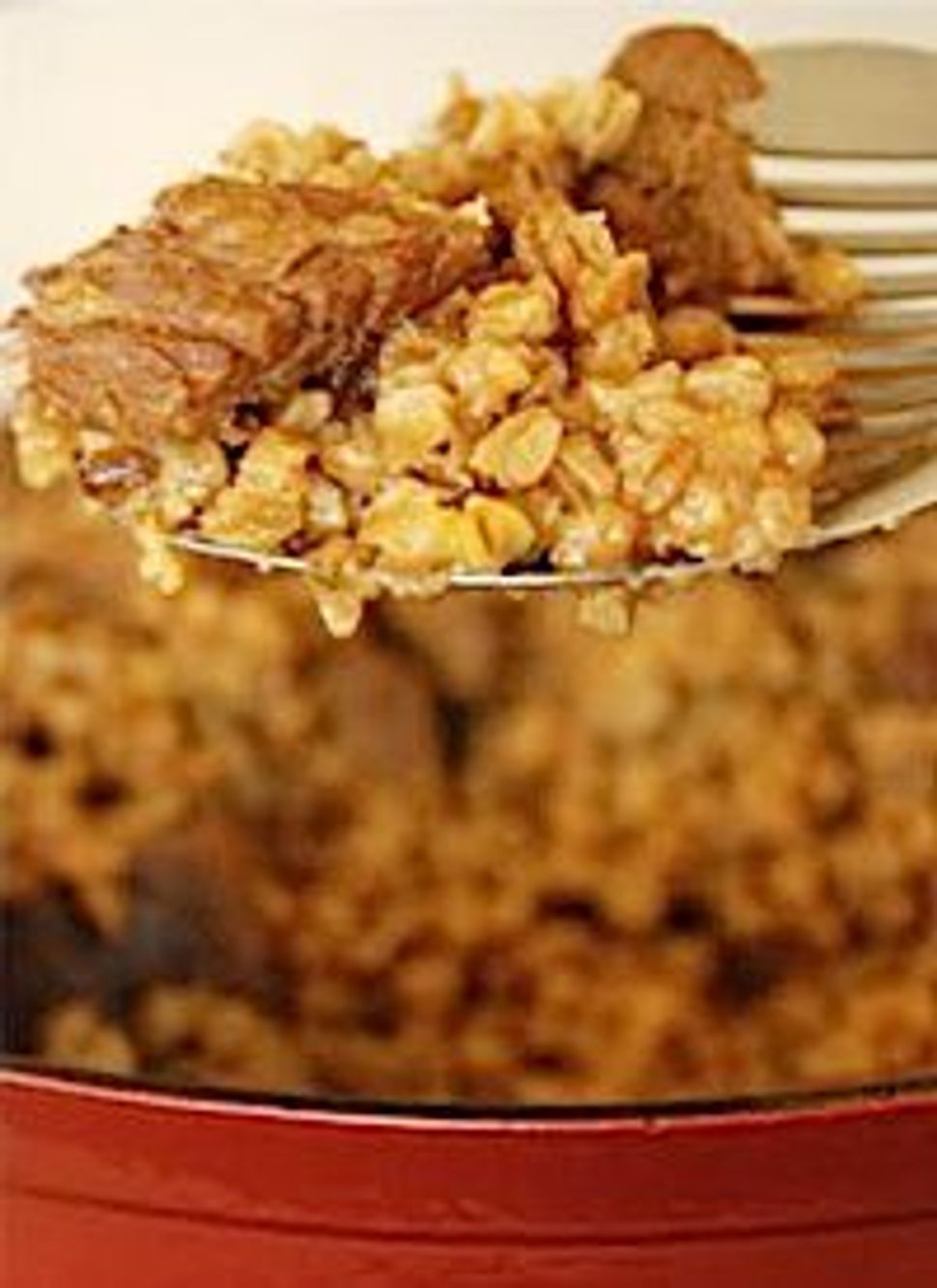 Savta Zarifa is the paradigm of a fairy tale grandmother; plump, patient and never far from her kitchen. Unlike characters from Mother Goose stories, she did not bake gingerbread cookies but simmered tangy tomato dumpling soup over a kerosene stove or rolled countless grape leaves with herbs and rice. On Friday she also prepared hamin, a slow cooked stew of wheat berries and meat that permeated the house with the aroma of Shabbat and was enjoyed the following day for lunch.

As a child, I remember Shabbat lunches at my maternal grandmother’s house as boisterous affairs that always ended with lively singing and platters of cold watermelon. Aramaic and Hebrew were spoken interchangeably and every five minutes another guest walked through the door. After double kissing their guests, chairs were scuffled to accommodate them and another voice was added to the banter. These meals replicated a sense of community that once existed in her native Kurdistan before the entire Jewish population immigrated to Israel. Like a mystical shaman, she transformed a few core ingredients, tomatoes, onions, wheat… into a feeling of home. This was what her mother taught her, the knowledge not only to create but to give.

At the center of these celebrations was the hamin, which was brought out to the table when my grandfather arrived home from synagogue. Known as chita, or wheat in Aramaic, it was often embellished with bulgur dumplings stuffed with a preserved meat called kalya. Even with the plethora of other foods at the table, my grandmother would inevitably ask “Did you eat chita?” because to her Shabbat was not replete without it. During the years some recipes have been changed, others forgotten, but chita has always been an invariable part of the family’s tradition.

While typical cholent, the slow-cooked Shabbat casseroles of Eastern Europeans, is often made with beans and barley, the Kurds used what was available to them. Wheat is an indispensable part of their diet, whether as flour, bulgur, cracked wheat, semolina or the entire unprocessed grain. Domesticated about 10,000 years ago in the Middle East, wheat was the backbone of the early civilizations of the region and continues to be an important agricultural commodity today.

Little remains of the Jewish Kurdish culture in Israel; the songs, dances and language have faded from daily life as the younger generation assimilated into modern life. Only a handful of Aramaic speakers still exist, most of them the very elderly. Sadly, the slightly chaotic but joyous Shabbat lunches of my childhood have also disappeared, together with the keepers of the custom.

Recently I went to visit my grandmother, whose apartment is much smaller and quieter than it once was. Her kitchen table is still the center of her home and it is there she shared her recipe for chita. Now, when my own children grow older I will be able to teach them.

Preheat the oven to 200 degrees.

1) In a cast iron pot or other oven proof pot, brown the meat in olive oil.

2) Add the onions and cook until beginning to brown. Add the rest of the ingredients, the wheat, tomato paste and spices.

3) Cover with water so it comes to about 1 inch above the wheat (about four cups of water). Bring to a boil. Cover and put into the oven overnight.

4) The following morning check to see if additional water needs to be added. If the wheat begins to stick to the bottom of the pot it’s a good idea to add a bit more water so it doesn’t dry out. I served it with a grated carrot and radish salad, dressed simply with olive oil and lemon juice.