A New Kind of Kosher Delivery 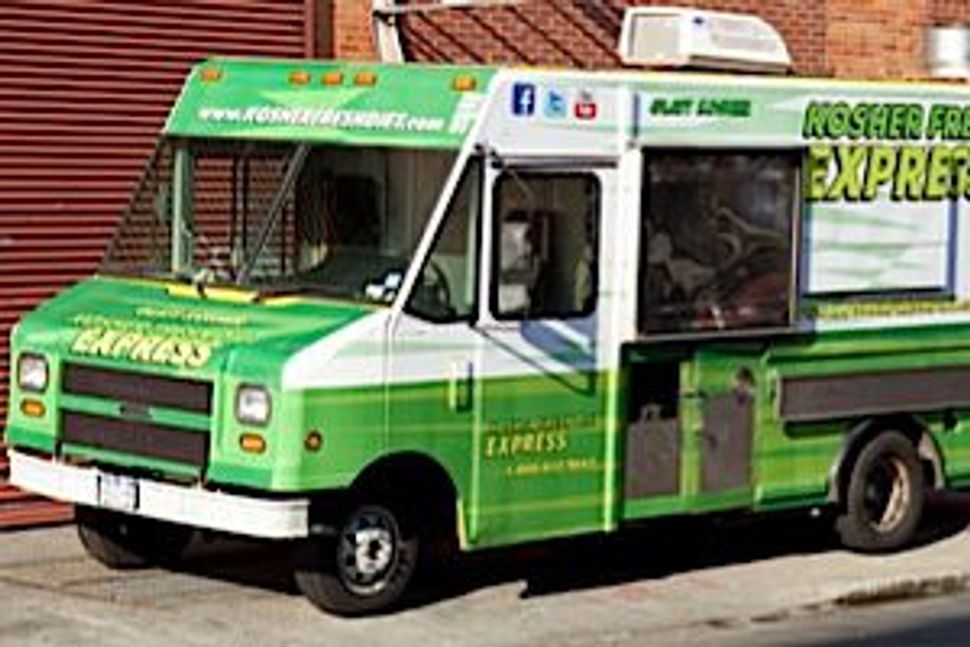 Image by Courtesy of KFD Express

On Monday morning, my doorman handed me an insulated food storage bag with all of my day’s meals — plus snacks! — inside. And I didn’t have to cook (or shop for) a thing.

The food, which had been delivered by 5 a.m. (deliveries take place from 7 pm-5 am) was cooked the day before by chefs at the Kosher Fresh Diet, a recently launched arm of food delivery service The Fresh Diet.

Breakfast was an egg white omelet with smoked salmon and whole wheat toast, lunch was a tuna and mozzarella wrap, and dinner was a turkey breast scallopini with whole wheat linguine. Dessert was a (really delicious) pear walnut muffin and snack was a garlic crostini. Though there were a few problems — my breakfast toast was soggy — on the whole, the meals were tasty and fresh, and the variety of food impressive. Of course, the portions were small — not surprising for a service that aims to help people lose weight.

The menus, are based on a 40-30-30 nutritional model — 40% good carbs, 30% protein and 30% good fats. The service, which is a kosher take on services like Nu-Kitchen and Zone, attracts two kinds of customers — those looking to lose weight, and those who have busy lifestyles, no time to cook and want healthy food delivered to them fast. On average, the latter stay with The Fresh Diet for three months, dieters often stay on longer. The kosher service currently feeds between 80 and 90 customers at a time. And growing.

The Fresh Diet launched in 2006, but its kosher arm launched earlier this year, with kosher kitchens opening in Miami in February and in Brooklyn in July. But for founders Yos Schwartz and Zalmi Duchman, a kosher service was always in the cards. “The regular Fresh Diet actually started out kosher by necessity,” said Schwartz, who is Orthodox, and started out cooking meals in Duchman’s kosher home kitchen.

Once they got their own commercial kitchen in Miami in 2006, the food stopped being kosher. And having attended Le Cordon Bleu in Pasadena, Calif., Schwartz had mastered the art of cooking food he couldn’t eat.

But thanks to the Kosher Fresh Diet, he can finally eat the food he prepares. The food Schwartz cooks for the Kosher Fresh Diet is certified by the Orthodox Union, and is modeled after the innovative food served at The Fresh Diet. He even makes imitation crab cakes and imitation grilled shrimp salad. “I want people to try foods they never thought they liked and realize that they do,” he said.

And despite the fact that the food he makes has to be suitable for reheating, and cooked a day before it’s eaten, Schwartz doesn’t feel any culinary limitations. “It all comes delivered in a refrigerated truck, so it’s just like putting your food in the refrigerator overnight before serving it,” he said. The only thing he’d stay away from serving — raw fish.

If a customer has a real aversion or an allergy to a certain ingredient, he or she can add it to their “dislikes” list. Customers who opt for the “Premium Choice” get four choices for each meal. And if there’s still nothing that they like, Schwartz will handcraft something. “It’s like having a personal chef without the mess and without having a stranger in your kitchen.”

But it comes with a pretty hefty price tag — the daily prices range from $34.99-$59.99, depending on whether you opt for regular or premium choice, and how long you have the service (the longer the duration, the smaller the daily price tag).

Schwartz is hoping to the spread the word among New Yorkers, with a brand-new food truck. The truck — once the beloved Quick Stop kosher falafel truck — has been transformed into KFD Express. It’s parked in the Financial District during lunchtime, but Schwartz hopes it’ll move around to various NYC Jewish neighborhoods to help promote the brand. Because of customer demands, they’re still selling falafel, alongside Kosher Fresh Diet sandwiches and salads. French fries will soon be replaced with healthier sweet potato varieties.

“We’re always looking to make things healthier,” Schwartz said. He recently spent three hours with fellow chefs and nutritionists, trying to come up brainstorming on a healthier alternative to Splenda in desserts, now that the sugar substitute is going out of fashion. “We’re trying to stay cutting edge,” he said.

A New Kind of Kosher Delivery