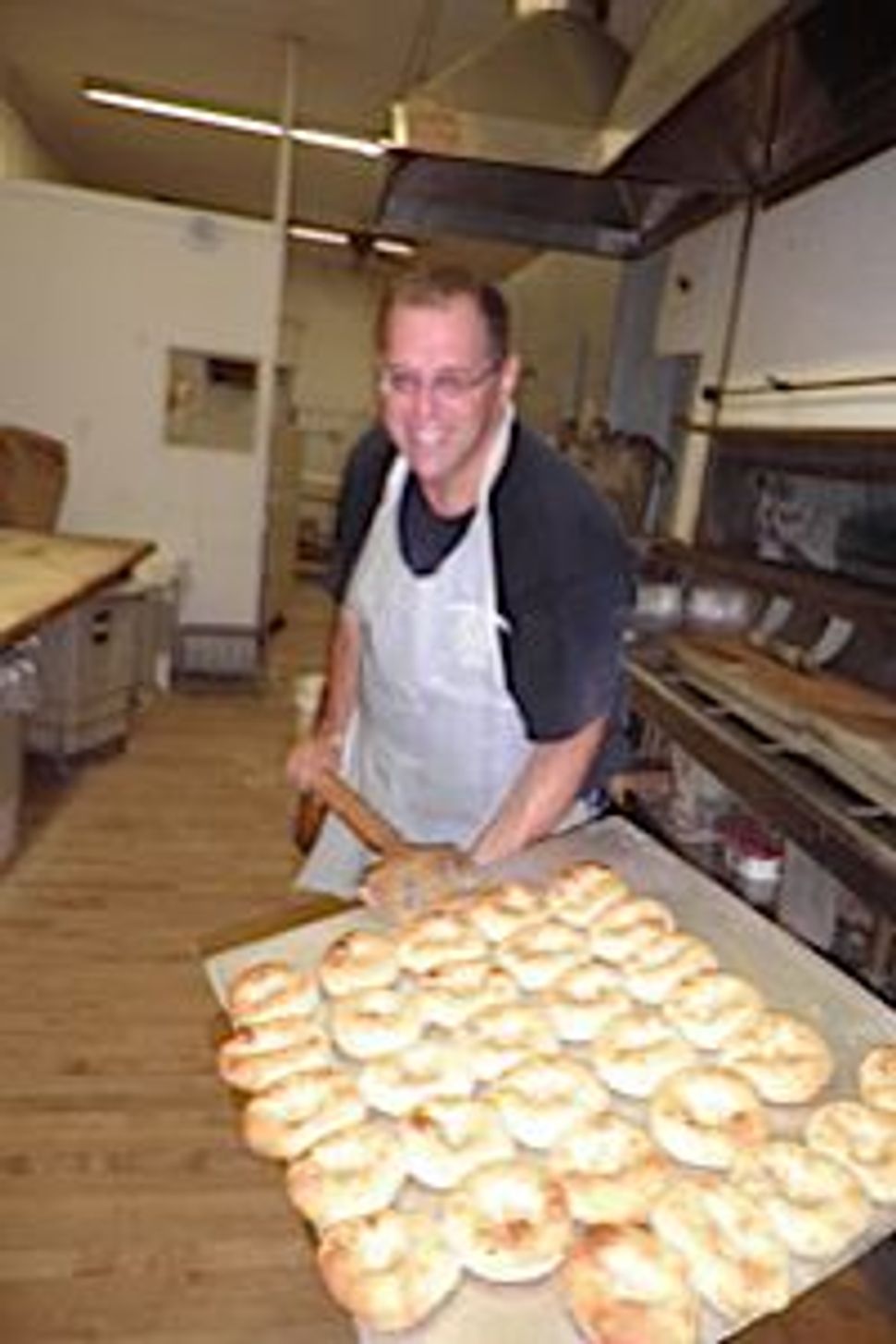 The long-lived Coney Island Bialys and Bagels, which has been in operation since 1920, is calling it quits. Proprietor and baker Steven Ross said his 91-year old company was a victim of the economic downturn and the changing demographics of his shop’s neighborhood.

Ross’s bialy bakery is located on Coney Island Avenue in an area once teeming with Jews. he has watched their number diminished in the area as Asian, Russian, and Middle Eastern residents have moved in. Traditional customers, such as husbands coming in Sundays to pick up bagels, cream cheese and juice for their families, have vanished.

After this Friday, Ross will be down to himself and two employees. He does not know whether the store will shutter before or after the High Holidays next month. Scraping off the flour on the side of a mixer, Ross said, “Right now, I’m going day by day.”

Members of the Jewish culinary community have already started mourning. “It puts a lump in my throat,” said Cara de Silva, author of “In Memory’s Kitchen: A Legacy of Women of Terezin.” She described Coney Island Bialys and Bagels as “one of the sacred spaces of New York.”

This season has not been kind to well-established bakers — earlier this summer the iconic New York Bagel shop H & H closed on the Upper West Side.

Two other well-established bialy bakers continue in New York and one has long fought for the title of oldest bialy bakery in New York. Bagels by Bell/B&S Bialy, located in Brooklyn, which opened its doors in 1947 is still in business, as is Kossar’s Bialys, on the Lower East Side. Kossar’s web site claims it is the “oldest bialy bakery in the United States,” but according to Mimi Sheraton’s “The Bialy Eater: The Story of a Bread and a Lost World,” Kossar began to work for his eventual partner Irving Mirsky in 1927, seven years later than Coney Island Bialys and Bagels.

Ross’s store got off to an early start. His grandfather, Morris Rosenzweig, hailed from Bialystok in northeast Poland, the town from which bialys (baked savory bread with a depression in the middle and basically sprinkled with onions) got their name. Ross said his grandfather began selling bialys with his brothers in Brooklyn in 1920, a strictly wholesale business in which the bread was baked in a basement. The company moved a couple times and added retail sales in the mid-1950’s.

In the 1970s, Ross’s father, Donald Ross, saw the eventual trend of people asking for bagels, and entrusted his brother-in-law to learn how to make them.

Over the years, the business stayed in the family. At age 8, the young Ross was sweeping floors and packing bialys into plastic bags to go to supermarkets. At about 11, he had graduated to working the counter. “I had to stand on a milk case to run the cash register.”

Now 51, Ross stood in the back of the store this Tuesday evening, where he was weighing dough into six and a half pound portions and putting them into a machine that divides them into 36 balls. He says a brick-lined rotating oven is superior to a rack oven for baking bialys.

Over the years Ross’s bakery has played a small role in the national Jewish food discussion. In 2001, he was invited by the Smithsonian to prepare bagels and bialys on the Mall in Washington as part of an annual festival and he has had an occasional well-known customer: “Jackie Mason ordered from us online,” he told me.

Jewish life and culture is imbued with bread. The spectrum goes from the coarse and heavy black bread of survival to the sacred challah on Sabbath, said Jane Ziegelman, author of “97 Orchard Street: An Edible History of Five New York Families in One New York Tenement.” Bagels and bialys, she said, lie somewhere in between.

Jewish culinary historian, Eve Jochnowitz, said “the question arises to why has the bagel crossed over to every aspect of Jewish life, while the bialy has not.”

Ross has projected much of his life into making bagels and bialys people want to eat. The most important ingredient in making a good bagel or bialy or any kind of bread, Ross says, is New York City water which he uses in a surprising way. He adds ice to both bagels and bialys during the summer keeps the moisture in the dough, which will stay softer and taste better.

Bialys can be eaten in a number of ways, and Ross has improvised a few of them over the years. The other night he used two bialys for hamburger buns. “Lightly toasted,” he said.