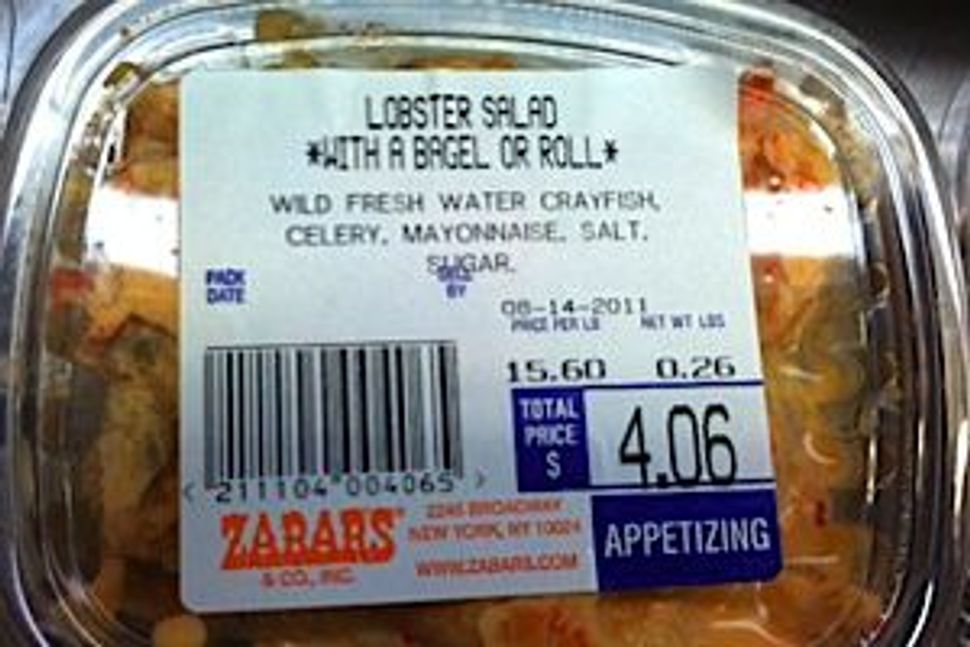 Image by West Side Rag

Since Zabar’s is Zabar’s, most customers don’t blink at paying $16.95 a pound for lobster salad.

But Doug MacCash, a dining columnist with the New Orleans Times-Picayune, noticed a minor inconsistency with a container of takeout lobster salad he picked up during a New York City trip with his family last month.

The problem? The role of lobster in Zabar’s lobster salad was played by crayfish.

“Lobster salad on a bagel; why not?” he wrote in a report on the alleged lobster fraud last week (we can think of several reasons why not, but that’s for another time). “It was delicious, but the pink/orange tails seemed small and somehow familiar from New Orleans cuisine. Then I read the label. The lobster salad ingredients were: wild freshwater crayfish, mayonnaise, celery, salt and sugar.

Once MacCash’s account of crustacean larceny crossed the wires, the fearsome Maine Lobster Council swung into action, according to a report yesterday in the The West Side Rag news site. “The seemingly innocent use of the name lobster on a tub of crayfish salad escalated into a bit of regional warfare,” West Side Rag said.

“Dane Somers from the Maine Council called Zabar’s — he actually got Saul Zabar himself on the line – and reminded him that mislabeling food is a very serious matter. Only a member of the Homarus species can be called a lobster, according to the FDA. And crayfish ain’t lobster,” the Rag wrote. Saul Zabar apparently told the lobster police that the salad’s label was “incorrect” and would change, the Bangor Daily News reported.

When The New York Times called, Saul Zabar sounded a defiant note. “He read aloud the beginning of the Wikipedia entry for crawfish: ‘Crayfish, crawfish, or crawdads — members of the superfamilies Astacoidea and Parastacoidea — are freshwater crustaceans resembling small lobsters, to which they are related.’ By that definition, he said, he could call a product in which the main ingredient — actually, the only seafood ingredient — was crawfish, ‘lobster salad,’” the reporter wrote.

Regardless, to avoid “confusion”, Zabar told the Times the salad would be rechristened “seafare salad.” But the Times wrote that “sticklers could also challenge ‘seafare’ because freshwater crawfish would presumably not be found in the sea.”

The mind reels at other potential menu misrepresentations at the iconic Upper West Side nosh emporium. What’s in that salami? Are those “oil-cured whole olives” really Moroccan, as claimed? Is the gefilte fish truly fish? And what’s in their lox spread exactly?

“New Yorkers came to trust in and love Zabar’s,” says the store’s web site, which claims more than 35,000 customers a week. As news of the lobster shande spreads, Zabar’s may have to work harder to keep that trust.