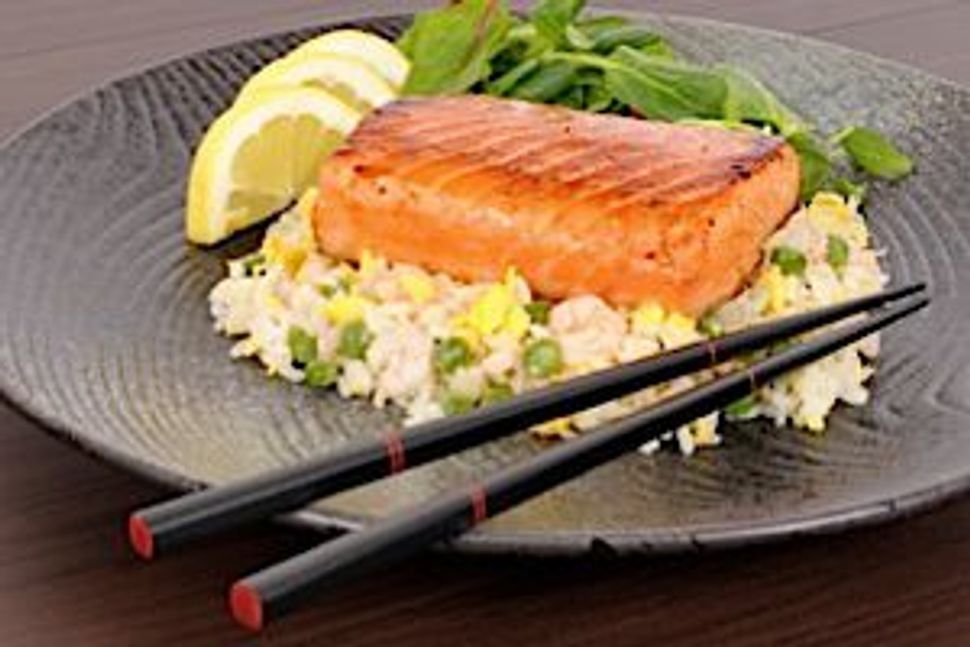 Thanks to my boyfriend Matt, I am now completely addicted to the Food Network. Matt and I often spend time glued to the television, brainstorming what we might create on “Chopped” with a certain mystery basket of ingredients. We get excited about what Canadian chef Chuck Hughes whips up on his day off. We even try and guess which celebrity chefs might be hitting the bottle a little too often.

A few weeks ago, I set out to put my newly gained food knowledge to good use and planned to make something special for Shabbat dinner. I prefer to keep my apartment’s kitchen meat-free (it makes keeping kosher much easier, especially in a small space) and admittedly, I was getting a little tired of trying to come up with new recipes using fake meat, which often didn’t suit a fancier Shabbat meal. I thought about some options and tilapia popped in to my head. There was just one problem: I had zero experience cooking fish that hadn’t come from a can or frozen in a box.

As a general rule, I don’t like to touch things that were once alive — but Matt promised he would help me. That didn’t ease my discomfort, though, as I stood at the fish counter in the North Market in downtown Columbus, Ohio one Friday afternoon and stared in to the glass case. It was like gazing into a foreign land. Rows of fleshy slabs laid on their icy beds, waiting for customers to take them home and cook them in to something delicious. The clerk behind the counter must have sensed my bewilderment, and as he asked me if I needed any help, I began to bombard him with questions about tilapia.

“Oh, tilapia’s great! You’ll make something wonderful, I know it,” the man told me reassuringly.

After a little chit-chat about Panko and other crispy coatings, I paid for the fish and headed home, excited to embark on my new culinary adventure. Matt joined me and we planned out our strategy for seasoning the Panko and coating the tilapia, whipped up some side dishes of herb-roasted potatoes and green beans while the fish baked, and we were all set for our Shabbat dinner.

Unfortunately, the meal didn’t turn out how I expected. Matt sensed my disappointment and tried to console me, but I felt dejected.

“What would the ‘Chopped’ judges say about this?” I muttered as I childishly pushed the tilapia around my plate with my fork. “They’d say the fish was flavorless, and the potatoes were dry and the green beans tasted old and wilted.” Matt maintained that I was being way to hard on myself and encouraged me to try again another week.

But two weeks later, I decided to return to the North Market and try again. This time, I picked out a beautiful piece of salmon and as I carried it home carefully like a precious little parcel, I daydreamed of how I would triumph at creating a bold and tasty harmony of flavors.

Long forgotten were the missteps of my previous fresh fish experience; I was giddy about cooking this salmon. When it was time to start cooking dinner, I practically danced around the kitchen as Matt and I unwrapped the white paper parcel; the gleaming orange fish was striped with perfect little ribbons of translucent white. Its skin seemed to sparkle. I was in love.

Standing side by side in my kitchen, Matt and I concocted a teriyaki marinade, doctoring a store-bought Whole Foods brand teriyaki sauce. We added whatever ingredients we thought might taste right — soy sauce, a splash of olive oil, a sprinkling of chopped scallions. And as the marinated fish hit the hot skillet with a sizzle and began to sear perfectly, I grinned from ear to ear. Next it was into the oven for the fish, and after cooking up a batch of sesame ginger rice and pan fried green beans.

I lit the Shabbat candles, we set the table and then I looked at the clock: it was 7:30 – a full 45 minutes before candle lighting time. I felt triumphant.

Marinade:
• Teriyaki sauce (enough to cover however much fish you have)
• A dash of soy sauce
• A drizzle of olive oil
• A handful of chopped scallions
• A squeeze of lemon juice
• Optional: a pinch of fresh ginger and/or fresh garlic; sesame seeds to taste

Step 2: Sear fish in a non-stick skillet for about 30 seconds to a minute. (You can sear one side or both – whichever you prefer.)

Step 3: Bake uncovered in a glass dish at 375-400 degrees for 15-20 minutes. While the fish is baking, you can prepare your side dishes. I like to make pan-fried green beans with garlic and sea salt and sesame ginger rice (I like the Near East brand). You can also make a short-grained sticky rice with this dish.