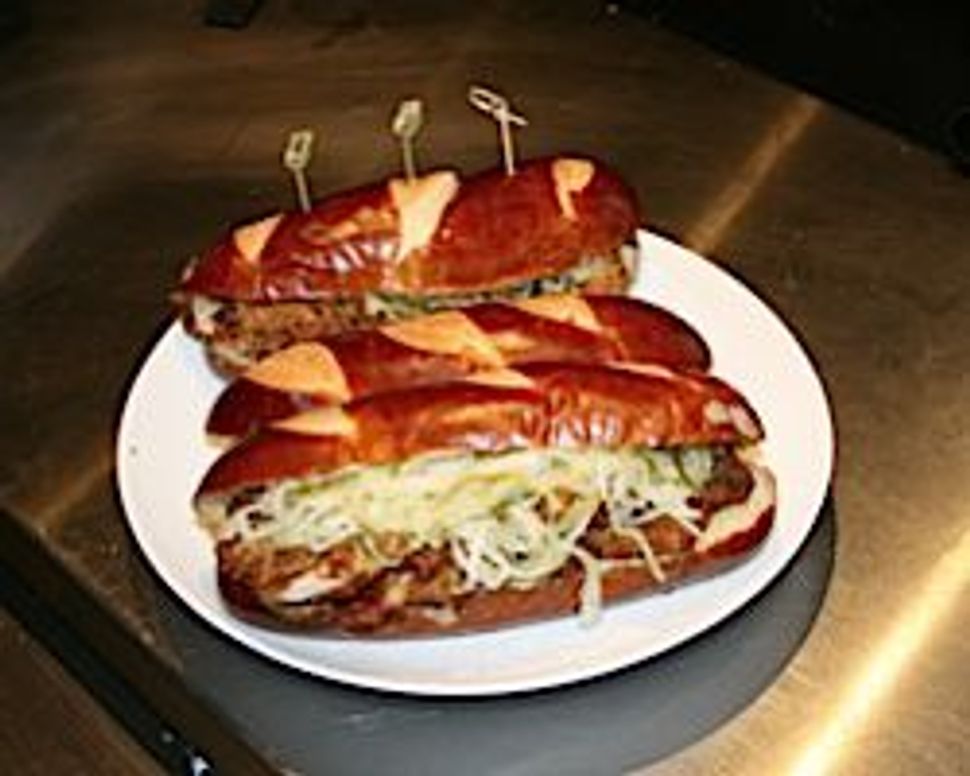 “There’s a big educational component with schnitzel, in general, because a lot of people don’t know what schnitzel is,” said Yosha, a businessman with a lifelong passion for food. This isn’t to say that the word “schnitzel” is completely esoteric — with trendy schnitzel trucks on both sides of the country (and even in fantasy animation land, the food’s popularity is indeed growing. But for those who are still under the impression that schnitzel is “like a sausage or whatever,” they’ll be surprised to hear that they’ve likely had something like it — though it might have been called Milanese. Or Tonkatsu. Or, dare I say, a McNugget. The bottom line is, most cultures have a fried meat tradition, and while Italian and Southern American varieties may have already earned their fame, it’s time for Israel’s comfort meat to shine.

But don’t be fooled by all of the schnitzels that are getting the media love and attention these days: most of these are Austrian schnitzels (think New York City’s Schnitzel & Things and Los Angeles’ Schnitzel Wagon, or any beer garden that struck your summer’s fancy). Austrian schnitzel, as the story goes, is the predecessor to Israeli schnitzel, which was conceived when German and Austrian Jewish immigrants settled in Israel. At the time, poultry was more accessible than veal, so while Austrian schnitzel continued to be made from veal, pork, or chicken, Israeli schnitzel came to be identified with chicken or turkey. Israeli schnitzel is also pounded less, producing a thicker serving. The Schnitz NYC team is indeed going the traditional and thicker route by way of using the chicken thigh, and then taking an unorthodox turn to offer pork and veal options.

Other differences between the two schnitzel traditions involve the presentation. Grab a schnitzel in Tel Aviv and it’s likely to be served up in a pita with hummus or ketchup. In Austria, you’ll usually find a potato salad or spätzle on the side. However one thing remains constant: a fat lemon wedge. No schnitzel in any part of the world is complete without one. Apart from the lemon and the basic principle of pounded, breaded meat, Schnitz NYC’s makeover of schnitzel is in a league of its own. “No one really plays around with the breadcrumbs, it’s usually like a traditional, very plain breadcrumb… we wanted to ‘crunchify’ the schnitzel,” said Yosha, who earned his schnitzel degree by spending every weekend for the past six months with the Erlichs tasting various schnitzels around the city (a process they call “Schnitzel Shopping”). In partnership with their chef, Jordy Lavanderos (who has served time in the kitchen of El Bulli), they’ve experimented with Panko-based breadings that include sweet onions, ancho chili, and a variety of herbs. The concept they envision is Chipotle-esque, giving customers a choice of three rotating breadcrumb flavors, which will then be applied to the marinated meat, fried, and then topped to order. Toppings in the test kitchen include acidic jams, herby mustards, and pickled relishes. The latter may have you wondering if their sandwiches have some Banh Mi in their lineage.

While a brick and mortar shop has yet to come into play, they’ll likely be making their rounds at outdoor markets around the city, in addition to Hester Street. Schnitz is also taking an element of their business to the internet. The company’s website, which launched last March, is something of a how-to for beginning restaurateurs. In blog form, they share their entrepreneurial experiences, from tastings to legal matters; there’s even a list of commercial kitchens available for rent in the city. “What we’re trying to do is cultivate not only a fan base, but a community of aspiring restaurateurs,” said Yosha, of basically giving away his hard-earned knowledge, “My brother-in-law thinks I’m crazy for posting what I post up there!”

Saturday’s launch will not only mark the start of something delicious, but it will also build upon an online community that has already begun. Expect it to be educational, inspiring, and schnitzel virgins, watch out: Schnitz NYC is sure to convert any schnitzel stranger to schnitzel lover.