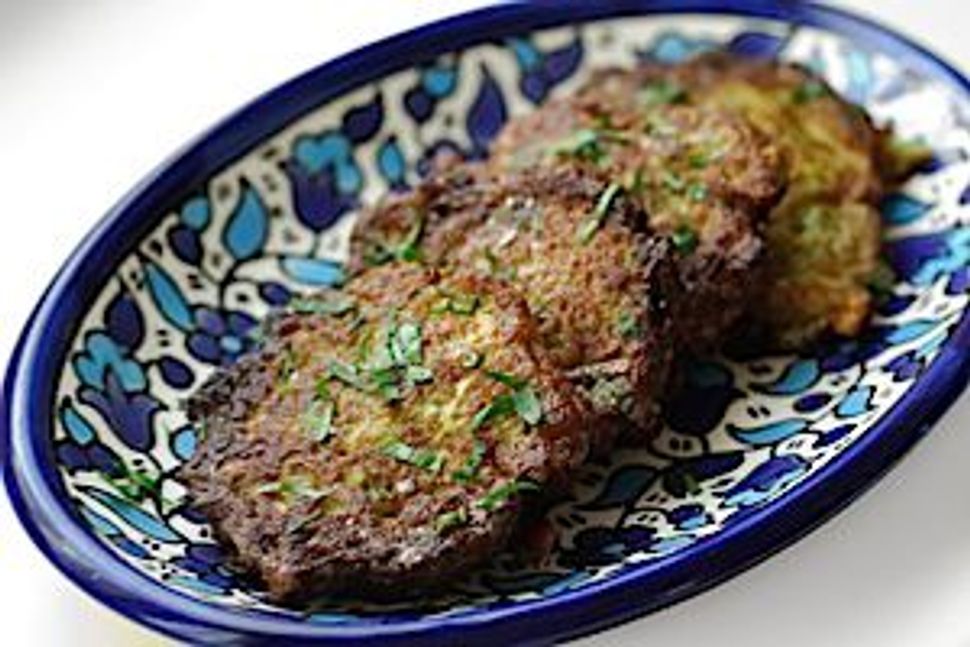 Image by Courtesy of Seriouseats.com Start the year off well, be bold, shine forth with simplicity. Rosh Hashanah foods are meant not just to tickle our taste buds but also to inspire. The flavors and textures of holiday foods are meant to encourage the turn towards new possibilities. According Gilda Angel, the author of the “Sephardic Holiday Cooking,” Turkish Jewish cuisine, which relies on bright flavors of vegetables, side lining the heavy spices that dress up other Middle Eastern Jewish culinary traditions, is the perfect way to give the New Year a bright bold fresh start.

Like other Sephardic Jews, Turkish Jews who are originally of Spanish decent make food a spiritual centerpiece of the holiday. Drawing on the ancient Talmudic custom of eating foods that embody the wishes that we have for the New Year, Sephardic Jews around the world have developed complex holiday menus utilizing the ingredients that correlate to the blessings for the New Year. For those worried that there might be a negative decree in the coming year, try eating pumpkin dishes, such as the Pan De Calabaza, a pumpkin bread from the menu below, which will work to annul the decree. Leeks, like those who found in the Keftes De Prasa, or leek fritters, also below help give us luck instead of strengthen those who seek to triumph over us.

In 1967 when Rabbi Marc Angel brought his future wife Gilda home to Seattle to meet his Turkish Sephardic family, the vegetables which were are so central in Turkish cuisine, were a surprise for Gilda. Growing up in a traditional Ashkenazi home, the future Gilda Angel thought she knew all about Jewish food. “Vegetables simply were not a part of my mother’s cooking.” By contrast, the meals in her future mother-in-law’s home featured, “18-20 kind of vegetables, it was a real eye opener for me,” recalls Angel. Looking back she notes that “today we are very sophisticated but there were all sorts of vegetables that were new to me, like zucchini, eggplant, okra and artichokes.”

Rabbi Angel, like his fiancé, was third generation American, born in Seattle. Unlike the Yiddish spoken in Eastern European American Jewish homes, the Angels spoke Ladino a language born of a mix of Hebrew and Spanish. Though there had been a small Jewish population in Turkish lands since ancient times, most Turkish Jews trace their origins to the expulsion of Jews from Spain by the Inquisition in 1492. Fleeing the Iberian Peninsula many Jews took up residence in the Ottoman Empire, which at the time stretched across North Africa up through the modern Baltics. Well into the twentieth century, Ladino was the primary language of the community that settled in Turkey. By contrast, they developed foodways that were distinct from other Sephardic Jews but which shared commonalities with general Turkish cuisine.

Jewish Turkish women took pride in their ability to cook and sharing food was a key form of socializing. In coming the United States food continued to be a central part of the lives of Turkish Jews and their descendants. As Angel explains, the women’s lives revolved around gathering at each other’s homes and sharing food, day to day and for celebrations like Rosh Hashanah. In “Sephardic Holiday Cooking” Angel details the special blessings and meanings of all the Rosh Hashanah foods. A generous cook, she has shared a few items from her Turkish High Holiday menu below. In addition to the leeks, for luck and the pumpkin bread to herald good news for the year, the whole menu blends tradition and good fortune. Growing up in Turkey as a Jew, Iris Aluf Medina, experienced these Sephardic customs at home. She comments that, pomegranate seeds which were in season at the New Year, along with other seeds, represented the plenty that we hope for in the New Year. In this menu those seeds are represented by the sesame seeds on the chicken. And though it has no blessing of its own, spinach, says Aluf Medina, is very traditional at Rosh Hashana, being after all in high season.

Especially notable on the menu is Tishpishti a unique take on the Rosh Hashanah honey cake. Relying on ground nuts instead of flour and soaked in honey citrus syrup, the cake decadent and sweet is reminiscent of baklava but without the pastry. The importance of honey as a sweet New Year food is well known, but nuts too hold a special place in Jewish tradition. The fruit of the almond tree can be bitter, but the almond is the first tree that blossom in Israel in the spring, it embodied hope for renewal among the rabbis of old. As we head into the New Year, we hope for a year that is straight forward and a fresh start. We hope that we are blessed with luck and with a lack of enemies and that even our most bitter parts might be transformed into sweet possibilities.