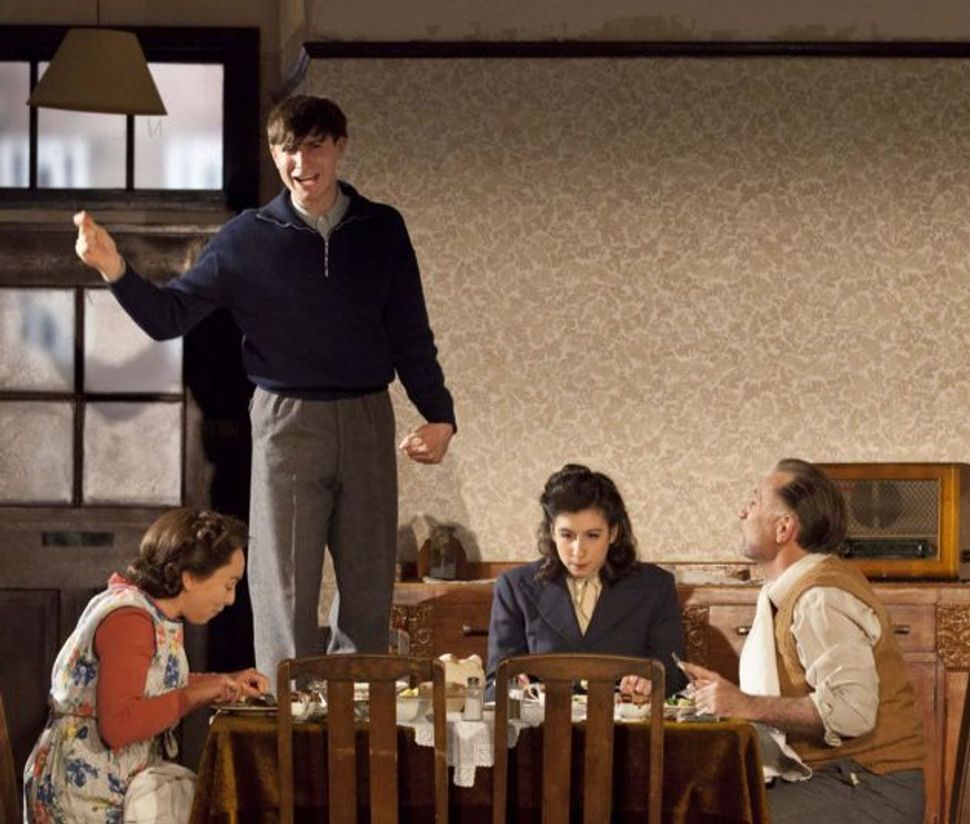 British playwright Arnold Wesker, who turned 79 on May 24, is enjoying a revival of interest in his writings. “Chicken Soup with Barley,” the first play in his 1950s partly-autobiographical trilogy (the others are “Roots” and “I’m Talking About Jerusalem”) ran from June 2 to July 16 at London’s Royal Court Theatre, where it was first staged in 1958, and on September 7, London’s National Theatre opened a production of Wesker’s most internationally celebrated play, “The Kitchen,” based on his own youthful experiences working in hellish restaurants.

Tracing a left-wing Jewish family’s trajectory from the anti-fascist Cable Street riots of 1936 in the working-class East End, to the 1956 Soviet invasion of Hungary, “Chicken Soup with Barley” has the punchy, strongly rhythmic dialogue that makes the best of Wesker still theatrically vital. Theatre lovers worldwide are made more Wesker-conscious by a June reprint of “Chicken Soup with Barley” from Methuen drama and two collections out in May from Oberon Books, “Wesker’s Political Plays” and “Wesker On Theatre.”.

The former contains Wesker’s moving “Badenheim 1939,” based on the novel by Aharon Appelfeld, which although completed in 1987, only received its first staging last year in London. It’s set in an Austrian Jewish resort during an arts festival, ranging from Chekhovian reminiscences by Frau Zauberblit, a wistful tuberculosis patient, to testy declarations by Rainer Fussholdt, a historian:

I’ve lectured on Martin Buber who couldn’t make up his mind if he was a prophet or a professor… I’ve lectured about Karl Kraus, now there was a great Jew — though he didn’t like Jews, if the truth be known but — he revived satire! Very important! How can a society be healthy without satire?

“Wesker on Theatre” expresses blunt, not satiric, fury about how difficult it has always been for Wesker to get his plays produced, even at the storied Royal Court Theatre, with the playwright concluding bitterly: “Many of us feel like Shostakovich waiting for Stalin to die.” The various Stalins targeted in “Wesker on Theatre” include “careless critics, treacherous actors, unadventurous directors” etc. Fortunately, the litany of blame is leavened with more appealing, if bittersweet, memories, such as when Wesker sat for a “forlorn Christ-like portrait” by the Polish-born artist Josef Herman, now in London’s National Portrait Gallery. Like a retired general focusing more on his defeats than his victories, Wesker, who is reportedly battling Parkinson’s disease, should be cheered up by the ardently new-found acclaim inspired by his works.

Watch a trailer about the new Royal Court Theatre production of “Chicken Soup with Barley.”