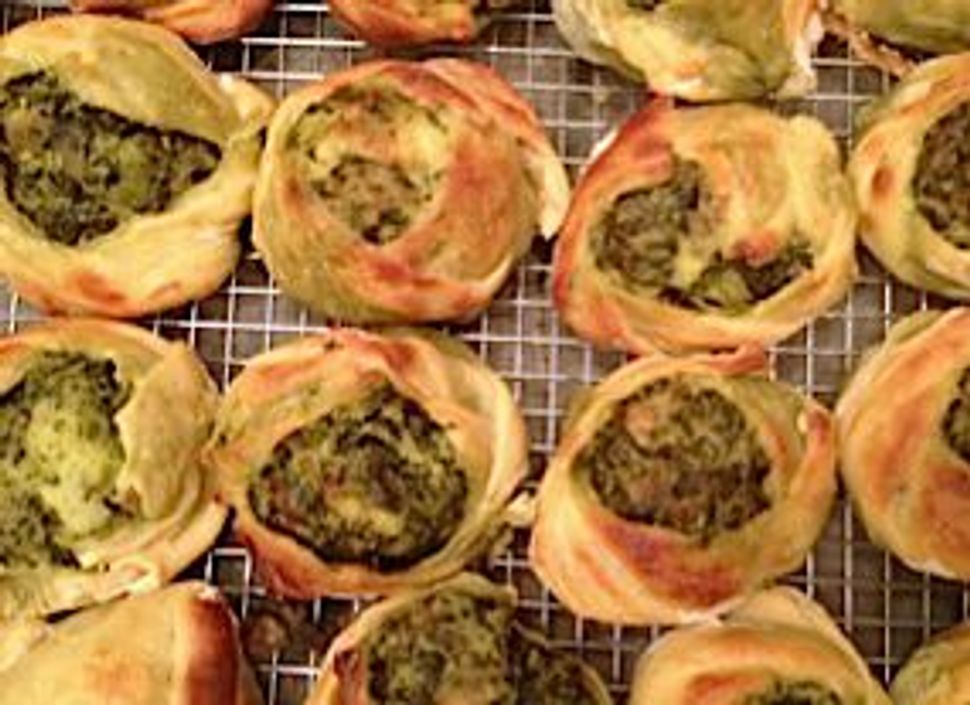 The “Knishening,” as chef and founder Noah Wildman coined it, was set to take place at this past Saturday’s Hester Street Fair, where his company, Knishery NYC, would make its debut. Toiling in his home kitchen, Wildman had produced 500 knishes in flavors ranging from the classic potato to a more modern and gourmet mushroom quinoa and dessert flavors. But what’s a cook to do with piles of his product when a freak snowstorm forces the organizers to cancel the fair? Why, bring it to the people, of course.

After getting permission from the Lower East Side’s cooperative village to put a table full of his product in a local park, Wildman used social media to invite his fellow knish lovers and friends to stop by for a sample. Lower East Siders moaned with pleasure, saying “God this is so good,” one said, while scurrying back to the tins for seconds and thirds. Wildman proudly stood by as an estimated 175 people came and consumed his fresh-baked knishes.

It helps that Wildman is a long time resident of the Lower East Side, the birthplace of the American Knish, and current home to one of the last remaining knisheries, the 100 year old Yonah Schimmel’s.

In the early 1900s, those same Lower East Side streets teemed with immigrant peddlers, hard at work selling their wares and skills. Somebody needed to feed them all, and who better than Jews from Poland selling their cheap but filling staple, the knish? Knishes were so popular in the early 1900s that the New York Times reported on a “Knish War,” as Rivington Street restaurants slashed their prices to compete with rival knish sellers.

Over the years, knishes became the perfect street food, sold by vendors everywhere from beaches to outside museums. But the knish has slowly faded into obscurity, disappearing from the street corners it once ruled. After the closing of Mrs. Stahl’s in Brighton Beach, only two major knish establishments, Houston Street’s Yonah Schimmel’s and Knish Nosh in Queens, remain. Though both are venerated institutions, neither is doing much to bring the once ubiquitous snack into the modern era.

Enter Wildman, a culinary school grad, inspired by the revival of many simple street foods like pizza, hotdogs and ice cream. Searching for ideas, he visited markets like Brooklyn Flea, Hester Street Fair and Smorgasborg, three of the city’s incubators for innovative food vendors. “I saw a bunch of new upstarts doing fun things with ethnic comfort foods, like kimchi,” he says. “It made me feel briefly bad for myself, like ugg, I’m just a boring middle class white guy with nothing fun to contribute.”

Until he discovered Danny Macaroons, last fall when he says it, “hit me like a ton of bricks.” Danny Macaroons wasn’t producing high end French macarons, but rather deliciously reinterpreting “those horrible Passover coconut and corn syrup balls that always tasted kinda’ like it’s packaging, either aluminum flavor or cardboard flavor. It didn’t take a lot of thinking from that point to the knish,” says Wildman.

That inspiration, followed by a lecture from knish-ophile Laura Silver, led Wildman to spend the winter testing recipes. He perfected the basics (potato, kasha and spinach), created new interpretations (mushroom quinoa and curry sweet potato), and added a dessert line (mango cheese and chocolate hazelnut cream), which appeared on Saturday.

Following his successful, if unconventional launch, Wildman plans to spend the winter further developing recipes. He plans to hit the fairs hard come spring, with weekly tables at Hester Street, Brooklyn Flea and Smorgasburg and to start a Knish Klub, a subscription based service where customers could sample an assortment of his newest flavors.

As for a brick and mortar establishment, which was rumored on Chowhound Wildman isn’t ruling it out. “It’s definitely something I’d be open to. I still have to evaluate what makes the most sense.”

But one goal is certain: he plans to put the knish back into place as the staple it once was. “Didn’t everyone have a box of knishes in their fridge growing up?” he asks.