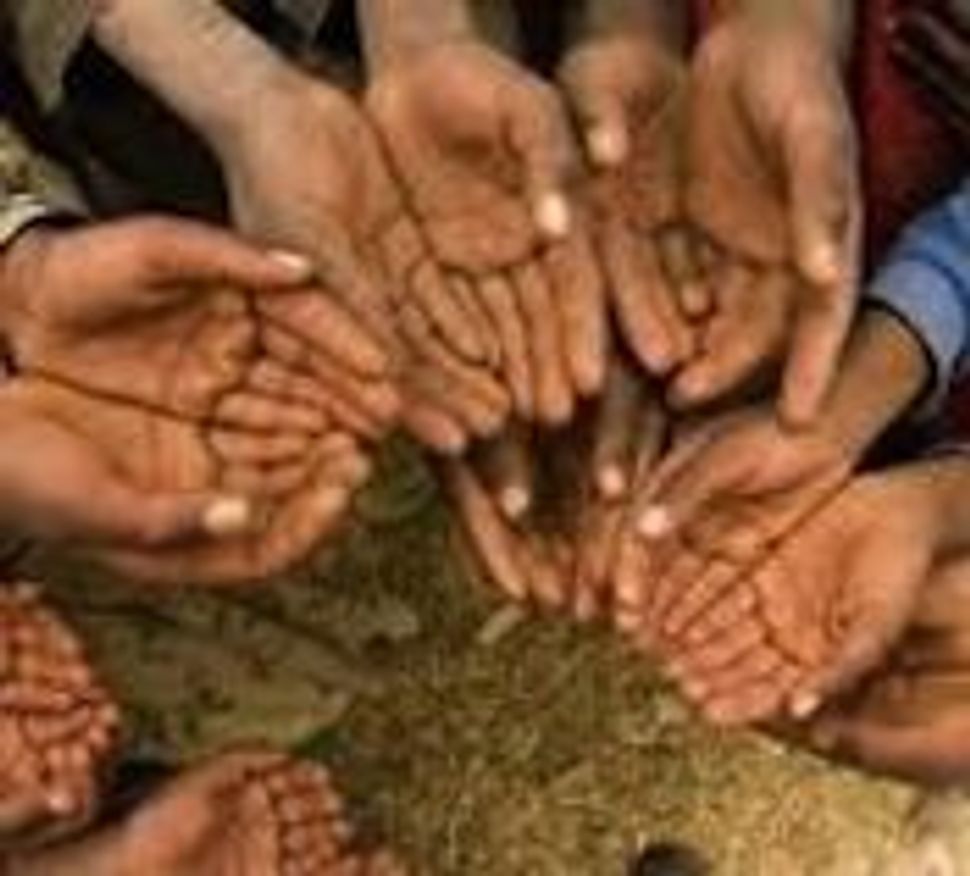 Image by Courtesy of Oxfam America

Imagine sitting down to an intimate community dinner with a smattering of neighbors and fellow city dwellers. The host directs you to a buffet table of simple spaghetti and offers you a can of soda. Perhaps you think nothing of the no-frills meal you’re about to enjoy, until you notice that your neighbor Jill, who works in finance, and is seated at the small table next to you, receives a steaming, full plate piled with lean meat, mashed potatoes, and vegetables and a healthful sparkling drink. Meanwhile the family of four that lives down the street, and whose head of household you know has recently been laid off from her job at the post office, has been ushered to a third table in the corner and is being served only small portions of white bread and water.

As your face boils at the indignity, and your pasta starts to leave a bitter taste in your mouth, you might question who would host such an uncomfortable and poorly distributed meal — and why.

This year, participants across the country will voluntarily play out precisely this viscerally squirm-inducing scenario in their local communities, in the hopes that it will generate a call to action around the issue this meal is meant to symbolize: income disparity and the resultant hunger which affects millions of Americans daily.

The Hunger Banquet concept was born in 1974, out of the outrage that Oxfam America and its allies in the social justice community felt knowing that one in seven individuals worldwide go to bed hungry each night. To this day, over 16.7 million children in the United States alone suffer from hunger. Malnutrition and obesity, attributed directly to lack of access to healthy, affordable food options, are still ranked as leading causes of death in the United States in 2011, soaring far beyond rates of death due to gun violence.

This year, Fighting Poverty with Faith, an alliance of over 50 national faith-based organizations, is implementing Hunger Banquets across the country as part of an annual week-long anti-poverty mobilization with the goal of cutting poverty in half by 2020. At each Banquet hosted, guests will draw tickets at random that assign them to a high, middle, or low income group, based on the latest statistics about the number of people living in poverty in the United States. Guests will also assume characterizations that describe the situation of a specific person at the income level they’ve been assigned. For example, if I am assigned to the low-income bracket, I may also have a script to follow to play the role of a young woman whose parents are immigrants and have recently lost their legal status to work in this country, halving their income and putting them at a precarious ineligibility for receiving food stamps or other government support. Each Banquet will include a facilitated dialogue about the feelings that arise from being assigned the roles and meals given.

Perhaps this week of Hunger Banquets — and their focus on how disparity in food access affects those around us — comes at a particularly apropos time in the Jewish calendar. For many of us, the experience of fasting and emptiness of body on Yom Kippur is still fresh in our minds, as is the zipper busting, bountiful harvest meal of Sukkot, a time when we partake in the uncharacteristic hospitality of a dwelling with no walls and feast on all the natural resources ripe at our fingertips. In one whirlwind of a month we’ve shared real hunger and abundant satiety intimately with our families and friends and are just now settling back into our daily routines of consuming meals without ceremony.

And yet, as my colleagues at the Jewish Community Relations Council in the Bay Area are demonstrating by co-hosting our own Hunger Banquet this Sunday, November 6 in Oakland, the arena of the dining room table is available as a tool to teach about our obligation to Tikkun Olam throughout the year.

As I sit at the table I’ve been randomly assigned to this Sunday, facing a meal that has been determined “worthy for me” based on an income bracket I had no power to affect, which has no bearing on my personal moral character, I will be thinking of what actions I can take this year to make hunger the exception to the American experience, not the norm.

Laura Rumpf is the Legislative Affairs and Intergroup Relations Program Associate for the JCRC of San Francisco, the Peninsula, Marin, Sonoma, Alameda, and Contra Costa Counties