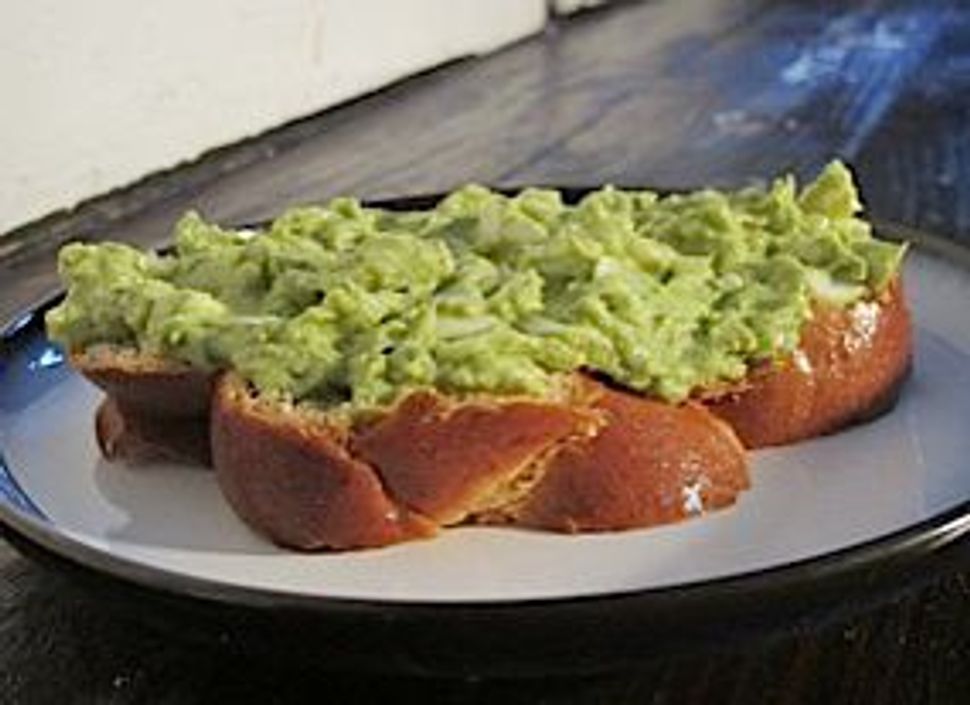 It would not be inaccurate to say that I have the palate of an octogenarian Polish Jew, despite the fact that I’m a 27-year-old Australian living in Brooklyn. Whenever I hypothesize with friends about what my final meal would be (you know the game), my answer is always the same: Shabbos dinner, Ashkenazi-style: challah, schmaltz herring, gefilte fish, chicken soup with kneidlakh and lokshen, roast chicken with potatoes, poppyseed cake, and a finger or two of Johnnie Walker, neat. I get misty-eyed just thinking about it.

To that list I’d add something incongruous, though no less essential: my mother’s avocado, egg and onion dip. There was no avocado in my grandparents’ respective shtetls, certainly, but it’s as native to Shabbos dinner in my Australian family as hummus is to an Israeli lunch. We ask for it in one breath, not bothering to enunciate the words properly: “pass-the-avocado-egg-n-onion.” No please, no thank you. (Ours is an etiquette-optional table.) My father, who is unfailingly generous with food — always insisting that everyone else serve themselves and eat before him — only ever seems disappointed when he misses out on avocado-egg-n-onion dip. Occasionally, when ripe avocados prove elusive, there’s no dip at all, and dinner feels incomplete.

I’ve always thought of avocado-egg-n-onion as a Jewish-Australian delicacy, because I’ve never seen it served outside of my extended family (although I’d be happy to be informed otherwise). Mum’s avocado-egg-n-onion is roughly mashed and crunchy with raw onion; Auntie Pearl, my Dad’s sister, makes a version that is smoother and saltier, more like guacamole. Auntie Alpha, my Mum’s sister, makes hers from the avocados that grow in her small but luscious garden in Perth, on the west coast of Australia. Even though avocados aren’t native to Australia, they connote sunshine and warmth, so they seem somehow intrinsically Aussie.

I skpyed my parents in Melbourne a few days ago to ask about the provenance of the dip. Mum recalled with Proustian fondness the first time she ate an avocado. It was at a friend’s wedding in Perth in the early seventies, and she and my Dad had recently gotten engaged. The fruit was cut in half and served simply with olive oil, as an appetizer. It seemed to be the height of sophistication and luxury. As avocados became cheaper and easier to find, someone in the family thought it would be a good idea to combine them with chopped egg to create a healthier version of egg salad. Mum claims it was a Western-Australian collaboration between her and Alpha; Dad thinks his mother might have made it first in Melbourne. (Over this discrepancy I shall now draw a veil of diplomacy.) Either way, it quickly became a family staple, and it’s delicious. I like it best on the sweet challah from Glick’s, Melbourne’s most venerable kosher bakery. In Brooklyn, Ostrovitsky’s on Avenue J makes a pull-apart challah worth the thirty-minute schlep from my apartment in Boerum Hill. It’s also delicious with vegemite on matzo (really!), although you might want to nix the Vegemite during Pesach.

I make this dip every Shabbos, and it’s almost like being home.

2 avocados (Hass are great)
3 hard-boiled eggs
4 scallions (you could use one red onion for color and a crunchier texture)
Juice of 1 lemon
Salt, pepper, and Hungarian paprika to taste
Optional: 2 teaspoons of light mayonnaise

1) Scoop the avocado flesh into a medium sized bowl. Add the hard-boiled eggs and mash together with a fork or potato-masher to a dip-like consistency.

4) If you like a creamier, egg-salad consistency, add a tablespoon or two of light mayonnaise (the avocado will make it pretty creamy, so you don’t need much).

5) Serve with the avocado pip in the bowl, and garnish with scallions and a dusting of paprika.