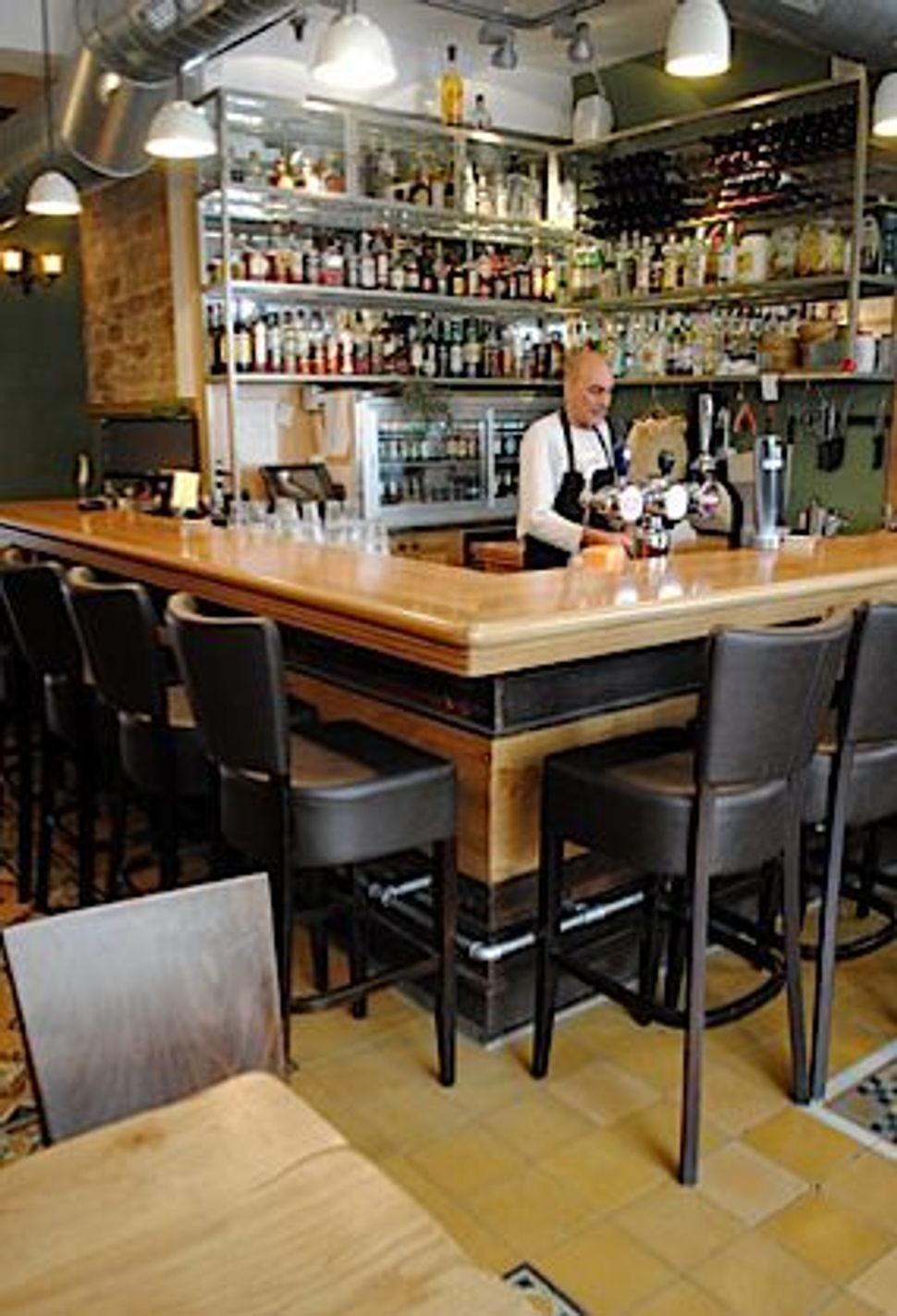 “Ten years ago [the market] almost vanished,” explains Eli Mizrahi, the former head of the Mahane Yehuda merchants association and the man credited with launching the shuk renaissance. A third generation shuk vendor, Mizrahi was unable to stand the thought of the market’s demise. So he took a risk and in 2000 opened the upscale Café Mizrahi in the center of it, serving cappuccinos and fresh pasta, camembert sandwiches and shakshuka. “It was kind of craziness,” he recalls. But word spread through the media and it brought people back, breathing new life into Mahane Yehuda.

Now, 11 years later, he and partner Sha’anan Street (the lead singer of popular Israeli band Hadag Nahash have opened the first cocktail bar in the market. “I like to be a pioneer,” Mizrahi says with a twinkle in his eye. Although he notes that there are plenty of bar-restaurants and small bars around the city, there’s nothing quite like this, least of all in the market. In fact, while there are bars, cocktail culture is still virtually non-existent in Jerusalem and a place like this with a creative cocktail list is refreshing in every sense of the word.

Besides being a symbol of the present and future of the market, Casino de Paris is also awash in its history. The new bar can be found in the building where the original Casino de Paris — a rowdy officers’ club, bordello, dance hall, and music venue — operated during the British Mandate in the 1940s. Mizrahi and Street had the idea to open a place by the same name four years ago, but could not find an appropriate space. Then, a few months ago, the owner of the newly vacant building approached Mizrahi, and he knew it was meant to be.

Mizrahi and Street took great care to restore the space, which until recently belonged to a china importer. They moved original tiles from upstairs into the bar area, stripped down the walls to show the exposed brick, and added a tasteful, classic-looking bar. The menu at Casino de Paris is styled after a Spanish tapas bar, explains Mizrahi. They serve only a few small plates of kosher charcuterie, smoked fish, and ceviche (all of which they source elsewhere) to accompany the vast drink selection. In a few weeks they plan on adding a soup, perhaps a goulash, that is made in house, but that will be it for the small menu. They offer a large selection of local Israeli wines and beers and a concise but thoughtful cocktail list.

The cocktails, which were concocted by Street, each take inspiration from the market and Israel. The Georgian Market, for example, is named after the small enclave in the market where Casino de Paris hides, and contains a boozy, clear Georgian spirit called Chacha that is akin to grappa. For the Yitzhak Rabin cocktail, “we want to remember our prime minister who was on the way to bringing us peace,” explains Mizrahi. So they took Rabin’s favorite drink — whiskey and soda — and added symbolic olive leaves.

Casino de Paris opens each day at noon and stays open late into the night, which is when it really comes alive, bringing an unusual bit of exuberance to the shuk after hours. Along with everything else in the market it closes for Shabbat, but reopens to a large crowd on Saturday evenings.

Although the bar has only been open for three months, Casino de Paris has quickly proven to be an instant success with 200+ young Israelis and expats in the know crowding the bar each night. “It’s amazing what’s happening here,” says Mizrahi, pleased and a little awed by the bar’s popularity. “I think that the city needed something like this because there was not any other place like this before. So [it’s] kind of a refreshment to the nightlife of Jerusalem.”

Finding Casino de Paris can be a bit tricky. From Jaffa Road walk down Mahane Yehuda (the main, uncovered thoroughfare of the market) towards Agrippas and take your very first left until you hit a little square, known as the Georgian Market. Casino de Paris is in the far corner.