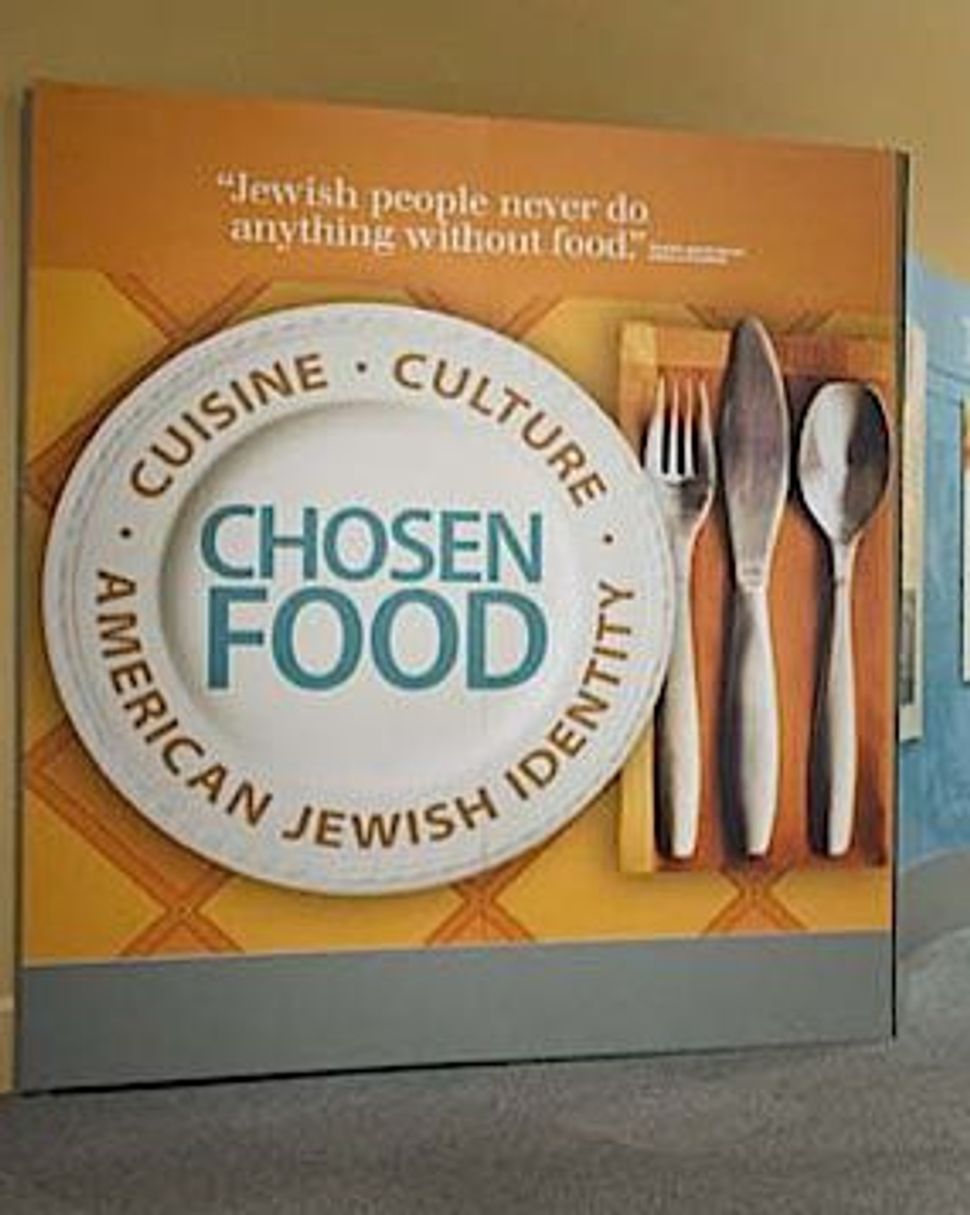 Image by Will Kirk

Visitors are welcomed with the words, “Come on in! Have you eaten?” and invited to vote by touch-screen for the “most Jewish food” from a list that includes Persian rice and falafel, along with the usual suspects. Just as Jews have immigrated here from all over the globe, Jewish food is more than latkes and bagels.

Dried limes from Iran bring the point home, as do a Russian samovar and a butter crimper from Germany. A gefilte fish pot lends dimension to a map of the Gefilte Fish Line, identified by Yiddish linguist Marvin Herzog. Running north-south 40 miles east of Warsaw, it divided the Chassids to the west, eaters of sweetened gefilte, from the Litvaks to the East, who seasoned theirs with pepper.

The show and the book of thoughtful essays by the same name (which features several JCarrot pieces) sift through many ingredients that make up American Jewish identity as expressed through food, among them immigrant heritage; newfound food plenty; the dissemination of new norms through settlement houses and cookbooks; the centrality of meals to family and religious life; interfaith navigations; and the ever-wider array of definitions of “kosher” and “Jewish.”

Image, text, and object interact to brilliant effect. A photo of mother Sara Pollak and daughter Lena Pollak Tulkoff, taken just prior to Lena’s emigration in 1917, poignantly illustrates this quote from food critic Mimi Sheraton: “In the old country, traditional dishes were simply one’s daily bread; upon immigration, they take on new meaning as the taste of home.”

If that’s not your cup of Swee-Touch-Nee Tea, though (or Zvetouchny, before WWI’s russophobia), try one of the interactive displays that leaven the scholarship: sit down at a dining room table and hear recordings of people talking about dinner at their homes, or head over to the kitchen and indulge in some fridge voyeurism: a video screen shows changing snapshots of real people’s perishables, with brief descriptions of the households they belong to. (Send your hi-res fridge photo and self-description to curator@chosenfood.org.

The kitchen is also where the show gives its best shot at explaining what “kosher” means. Various aspects surrounding kashrut arise throughout the show, and some hot-button intra-tribal disputes are probed with humor and admirable courage. What is the religious status of kosher imitation bacon bits? Is a crab feast kosher if you use paper plates? What prompted certain major Jewish organizations to make their annual dinners kosher, when they never had been before (hint: it happened in 1967)?

Unfortunately, the kitchen, with its white melamine countertops, red and blue scrub brushes, and informational panels titled “What is kosher?” and “Who keeps kosher?” is half-hearted in the answers it offers to those questions. The fundamentalism underlying kashrut doesn’t play well in this context. You can read that Brian Dentz of New York City “often feel[s] kashrut is an exercise in neurosis,” that the majority of kosher consumers are not Jewish, that the kosher image has been commodified, and that various movements seek to expand the definition of kashrut to include sustainable agricultural practices and ethical treatment of animals and workers. But visitors expecting an exhibit about Jews and food to be a good place to learn about Judaism’s dietary laws will probably leave disappointed.

You can’t see a show like Chosen Food without comparing it with the taste of home. Though I now keep kosher, I didn’t grow up that way. My mother ate hamantaschen and matzoh ball soup as a child in Pittsburgh’s Squirrel Hill, though she isn’t Jewish, but my father, a fourth-generation German-Jewish Baltimorean, liked to say he never laid eyes on a bagel until he went away to college. He also liked to say to the guy handing him a hot pastrami sandwich over the counter at a local semi-kosher deli, loud enough for everyone to hear, “Now, remind me how it works: I can eat this in here, but I can’t have a chocolate milk with it?” It was a kind of ritual with him.