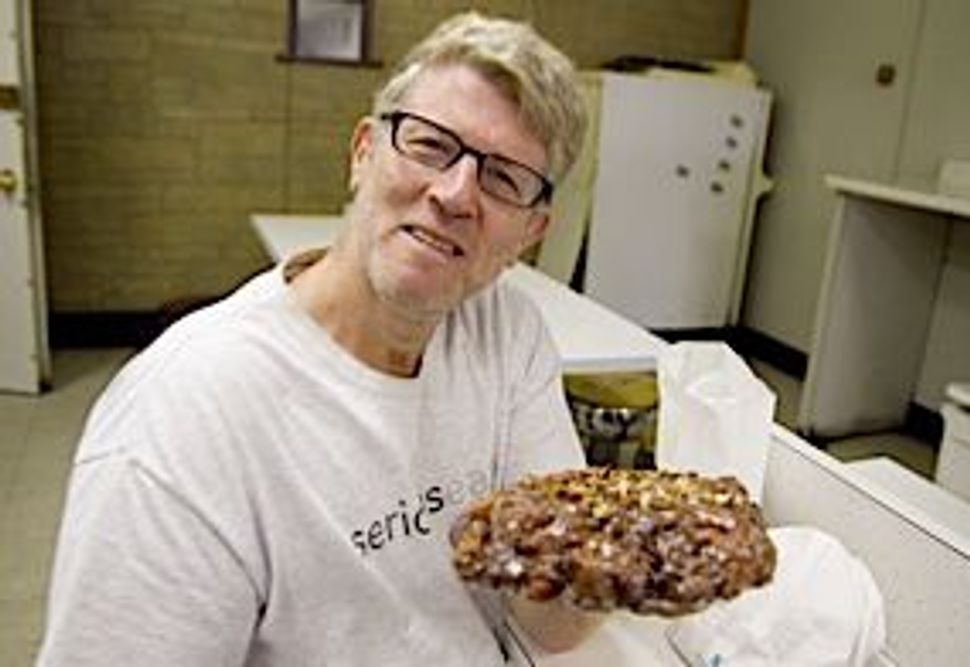 Serious Eats editor Ed Levine has been dubbed the “Missionary of the Delicious” by Ruth Reichl and rightfully so. There are few food writers in America who seem to enjoy good food more than Levine. He can rattle off lists of the best delis, pizzas, desserts and a place to get an obscure Chinese dish you’ve never heard of in almost any major American city.

His website Serious Eats provides a space and community for enthusiastic eaters to share recipes, tales of new restaurants and creative food events. This fall, Levine and the editors of Serious Eats dropped their first book, “Serious Eats: A Comprehensive Guide To Making & Eating Delicious Food Where You Are,” a food book with recipes, fun food timelines, recipes and comments from members of the Serious Eats community.

Sprinkled throughout the book are a handful of references to Levine’s Jewish culinary background growing up on Long Island and being a descendent of a Lower East Side pickle seller. He shared with us what it means to be a “Serious Eater,” his thoughts on contemporary Jewish food and what he’d like to eat for his last meal (hint: it includes pastrami).

How do you define a “Serious Eater”?

It’s not about being a foodie or being a food snob, it’s about this interest in finding as much seriously delicious food as possible, up and down the different scales: Foie gras can be serious and a perfect hotdog can be serious — it’s all one and the same to us…. There’s a democratic approach to food and an inclusive nature to being a serious eater — the wanting to discover something delicious and then telling someone about it.

The book isn’t quite a cookbook book, nor a straightforward guidebook. Tell us about it.

We wanted the book to reflect the energy of the site…The site is a combo of reviews, stories, recommendations and recipes. It doesn’t, strictly speaking, fall into any genre. But I think it works as a book in the same way the site has. It has a passionate, discerning, and inclusive voice. A big part of the site is the community, which is why we sprinkled quotes or conversations with community members throughout the book.

We want you to be hungry. We really wanted to make it a comprehensive guide to eating and making food wherever you are — that’s what we aim to do. We want to make you hungry. It’s the missionary gene that I have, that the site has, that all the writers and editors have — we want people to eat as much seriously delicious food as possible.

You traveled with your team all across the country for this book. How many flights did you take?

The most fortuitous thing that happened was when Jet Blue announced the “all you can jet” pass. So when I saw this I bought them for my staff. I said, we’re going to get to all of the places we’ve always wanted to go to. For some places we had a specific goal in mind, like eating at every po’ boy place in New Orleans. It’s an insane day filled with countless thousands of calories. It’s a crazy amount of food.

In the book, you mention that your grandmother sold pickles on the Lower East Side. What were some stories about her? Do you have any of her recipes?

It probably wasn’t pleasant in the winter. She apparently also had a deli or a restaurant in the Bronx. She was more of a food person than any other person in our family. She was a really serious Eastern European home cook.

I don’t have any of her recipes and taste memories always play tricks on you. Her blintzes were transcendent with thin delicate crepes [with] really creamy cheese filling.

She was born outside Kiev, I think. She was my dad’s mother. She’d be around 125 now.

What do you see that’s exciting in Jewish food now?

People want to smoke their own salmon or make their own pastrami. What I hope is going on is that there’s a refocusing on the craft involved in Jewish cooking. Rugelach can be bad or heavy, or can be light, buttery and delicate and seriously delicious. My hope is that more serious pastry chefs and cooks decide to apply what their grandmothers and mothers taught them and update it — it will be great.

So what Rich Torrisi and Mario Carbone [chefs and co-owners of the restaurants Torrisi and Parm] have done for Italian American food, I would love if someone did for Jewish American food in a really focused way….It’s sort of happening in drips and drabs instead of someone really diligently going: “How can we re-make kasha varnishkes?”

What do you think of this generation of delis, like Mile End?

If they’re done well, then I think it’s great. I think the DIY food culture is a really interesting sort of movement. In the case of pastrami, it’s really hard to make your own pastrami because it’s cured and smoked. You need equipment, knowledge, and I think you need passion. I love Kenny and Zuke’s in Portland. [Owner Ken Gordon’s] pastrami was amazing

In the right hands, it’s an amazing thing. A lot of the standard deli meats aren’t being made with the care they should be.

So, Christmas is coming up, which for many Jews means Chinese food. What’s up with that anyway?

I grew up with the same sort of Cantonese American food that everyone grew up with — sort of the classic two from column A, one from column B. There were two Chinese restaurants in the five towns [on Long Island] we used to go to. Dad always ordered dinner for five, even though there were six of us. I remember it being great.

I didn’t even know about the Christmas thing until I moved to New York City. I think it’s a New York City tradition.

Not to be too fatalistic, but what would your final meal be?

It’s always hard to say. I can never limit to one meal — some combo of barbecue, fried chicken, pastrami and something with warm chocolate sauce.