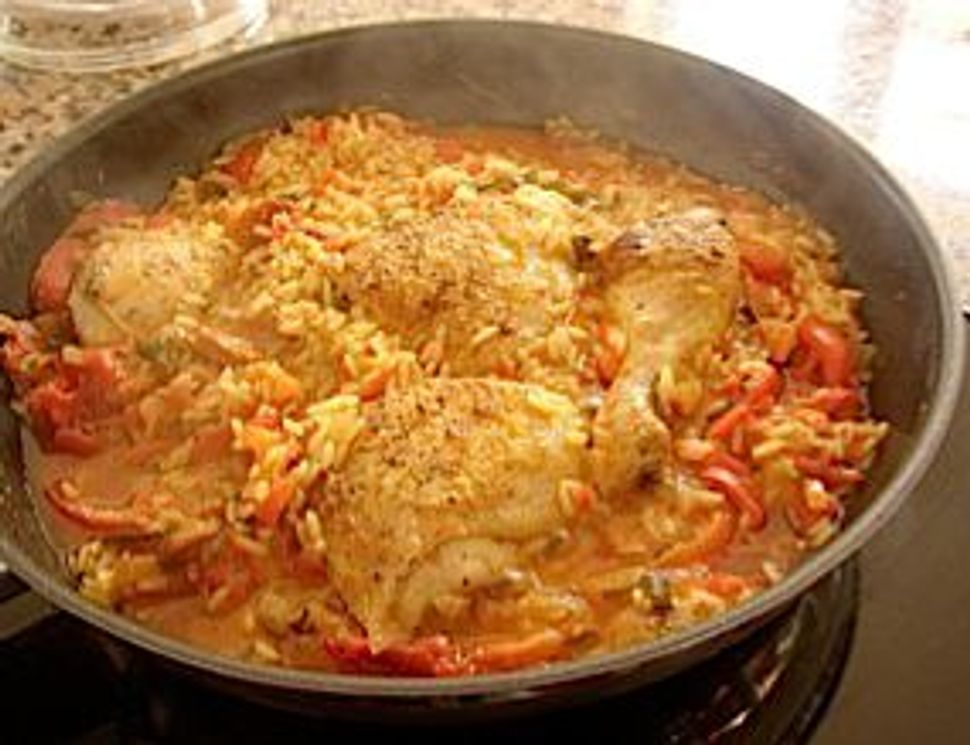 In the almost feudal state that Nicaragua was 90 years ago, daughters of wealthy families were taught French and needlework, and were expected to marry well. They knew nothing about how their food was cooked, their clothes made, or their households provisioned. They weren’t allowed to associate with the servants, or even to enter the kitchen. Finishing school in Switzerland, then marriage to a suitable boy — those were girls’ expectations in Managua, the capital of Nicaragua, back when my Mom was growing up.

My mother’s parents, descendants of Spanish Jews, owned sugar-cane and coffee plantations. They were proud of their Sephardic heritage, but for the exception of lighting Shabbat candles and abstaining from pork and shellfish, they had dropped Jewish observance. Sad, but maybe inevitable in a country where only a handful of Jewish families have ever lived.

In 1943, my mother visited family in the United States. There she met, and fell in love with, her brother’s friend, a handsome Jewish soldier. In the rushed way of those war times, they married a few months before he was sent to Europe. Now a war bride, Mom went to live with her young husband’s parents in New York. Grandma had studied at the New York branch of the Cordon Bleu cooking school. Under her kind tutelage, Mom discovered a real culinary talent. When Dad returned from war in Europe, he found his exotic bride speaking English and cooking with a fine hand.

Later, the growing family moved to Puerto Rico and then Venezuela, where I was born. Although Mom had servants again, she still took an active part in running the house.

“With Grandma, I learned American style cooking,” she told me. “Gravies, roasts, and apple pies. But almost all the foods you ate growing up, I learned from the Venezuelan women who worked for me.”

I remember those women, their warm-colored skin and warm voices, their unhurried efficiency around the house and their mischievous, sense of humor. Side by side with them in the kitchen, Mom learned the secrets of rice perfumed with garlic, of hearty black bean soup, and the gala dish arroz con pollo — rice cooked with chicken and olives.

As my parents became more religiously observant, Shabbat dinner became the week’s highlight. My mother would spread a white tablecloth on the table and on it set the silver challah platter and the polished Kiddush cup. Dad loved the Shabbat melodies of pre-Holocaust Chassidic communities, and we would sing them at the meal. Some were nigunim — tunes with no words. They had a military swing, and we kids liked to thump the table with our fists in time to “Bim bom” and “ay didi dai.” Others were haunting prayers for the rebuilding of Jerusalem. Arroz con pollo was one of my mother’s Shabbat specialties, and the savory aroma of it is forever entwined in my memories with those Shabbat dinners, and a dawning appreciation of all that was subtle and strong in her food. Years later, I understand that the strength and subtlety were of Mom’s own character, expressed as the exactly right point of seasoning and timing.

1) In a small bowl or cup, infuse the saffron in hot water or stock.

2) Rinse the rice and set it to drain.

3) Use a large, shallow pan. Pour olive oil in it and brown chicken pieces over medium heat. Turn pieces to brown on all sides. Don’t crowd the chicken; if necessary do the browning in two batches. Remove chicken to a platter.

4) In the same oil, sauté onions and green pepper till starting to soften. Add cumin, salt and pepper. Add rice and stir, cooking till it glistens, about 2 minutes.

5) Add tomatoes and cook another 3 minutes. Stir garlic in. Add bay leaf. Put the browned chicken back in the pot. Add optional chili.

6) Add the saffron-infused stock, olives, and remaining hot stock or water. Taste for seasoning and add salt, pepper, or more cumin if desired.

7) Cover the pan and bring the contents to a low boil. Immediately lower the heat and allow to steam until the rice is fluffy and the chicken tender – about 20 minutes.

8) Let the pan stand, covered, for 10 minutes before serving the arroz con pollo. Spoon out onto a serving platter and garnish with cooked peas all around.

Note: for a quickly-made stock, take the wings and neck of the chicken and simmer them together with 1 carrot, 2 stalks celery, 1 chopped medium onion, 1 sliced medium tomato, 1 whole, peeled garlic clove and a little salt. Cover and cook for 45 minutes hour. Strain, and use hot.