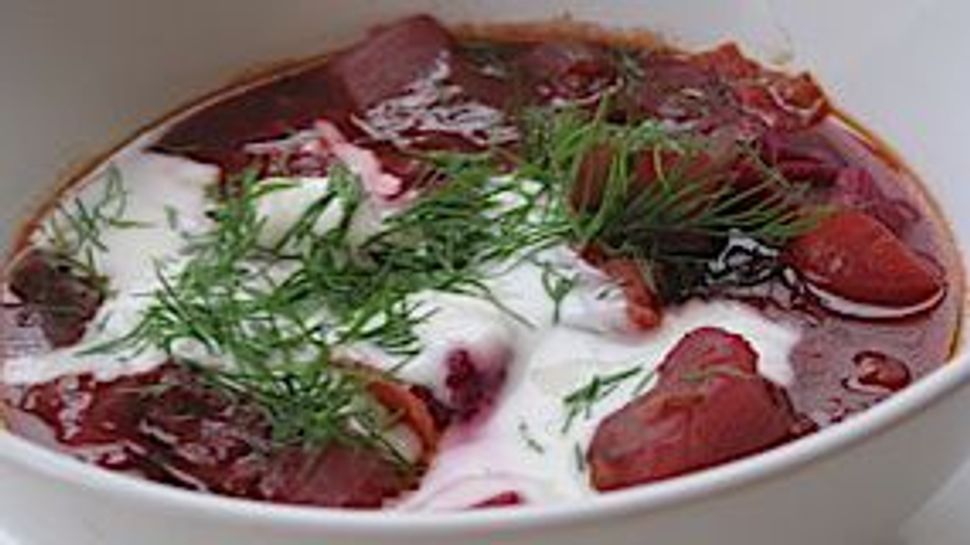 Kenny Hockert isn’t waiting to get rolling. While still looking for a suitable and affordable food truck to buy, the chef has already started his Old World Food Truck, which serves up sustainable old world fare, as a weekly pop-up café in San Francisco’s Mission district. Since opening in September, the spot has garnered a regular following, and drawn in passersby who see the chalkboard sign Hockert has put out on the sidewalk.

Each Wednesday evening Hockert serves up what he calls “Eastern European Jewish Soul Food” at the La Victoria bakery from 6:00 to 9:00, or until his supply runs out. On the menu, which changes each week and is posted on the Old World Food Truck Facebook page, there are lots of recognizable items like pierogi, goulash, borscht, schnitzel, chopped liver, and pickled vegetables. But the 39-year-old Hockert puts his unique stamp on these by altering the traditional recipes to reflect his own personal interest in and commitment to using organic, sustainable and seasonal ingredients.

Hockert, who prepares all the food himself — including the pickling, curing and smoking — is adamant that “sustainable” and “Eastern European” are not mutually exclusive. “The flavor profiles of the region work well with sustainability,” he told the Jew and the Carrot. “There is a vibrant seasonal food culture in Eastern Europe that people are not aware of. For instance, in the summer, Eastern Europeans eat a lot of chilled fruit soups, which is something that will work great here in California.”

Diners could see and taste this at the recent special Hanukkah pop-up he held, where he served jelly donuts filled with house-made persimmon preserves. Early in the fall, for Rosh Hashanah, he made gefilte fish not out of the usual carp and whitefish, but rather out of rock cod and steelhead, which were freshly available on the Pacific coast at that time.

Among the items on this week’s pop-up menu are Jewish-style Bahn Mi — a sandwich of chicken schnitzel, shmear of chopped liver pate, pickled cherry pepper, cured cucumber, fresh dill, and horseradish mayo, and lamb shank goulash with gsipetke (Hungarian egg noodle) — a traditional Hungarian stew of lamb shank, winter vegetables, and Szeged paprika, served with a side of homemade egg noodle. Hockert almost always has a pierogi option, and this time it is mushroom and cabbage pierogi, which are boiled and then fried, and served with the “condi-mensches” of sweet and spicy pepper relish, caraway sour cream and fried shallot.

Once his food truck gets going (hopefully by summer), Hockert, a transplanted New Yorker with a dozen years as a professional chef under his belt, plans to coordinate the food he serves at the pop-ups with the food he sells from the truck. In the truck, he’ll focus on serving up simple dishes like corned beef and schnitzel sandwiches, goulashes and borschts — but he “won’t sacrifice the quality and seasonal aspect.” The truck will become the main part of the business, but Hockert intends to keep the pop-up going on a semi-regular basis, or at least for special holiday meals. Whether served from the truck or at the bakery, all items will be less than $10.

Hockert drew inspiration from his own background as the son and grandson of Polish immigrants when deciding to focus on this kind of food. “There are all different kinds of food trucks out there, but none are serving Eastern European fare,” he said. But there’s a growing interest in this cuisine in San Francisco with places like Wise Sons delicatessen,, which is also in the neighborhood.

Right now, Old World Food Truck seems to be appealing mostly to a Jewish clientele, both young and old. This is the crowd that instinctively appreciates Hockert’s pickled herring, chopped liver and gefilte fish, and that’s why — at least for the meantime — he is not venturing into the great Eastern European tradition of pork sausage making. But that may change once his truck is rolling and he begins bringing “our own great food culture,” to the masses — or at least culinarily curious hipsters throughout the Bay Area.