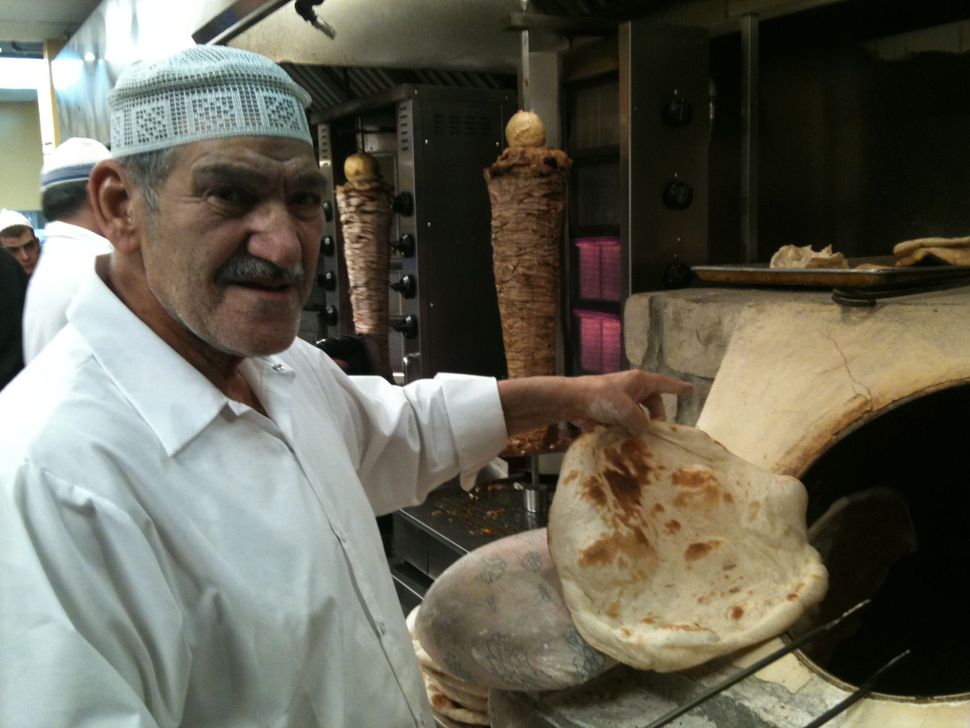 Septuagenarian Fuad Haba was a long way from his birthplace of Iraq and his family’s famous bakery on Agrippas Street in Jerusalem’s Machane Yehuda market as he made laffa bread in a taboon oven in suburban Toronto. But neither he nor the customers at the new Dr. Laffa restaurant, where the retiree is hard at work, seemed to be deterred by the freezing weather on a recent wintery night.

Fuad was in Toronto helping his son Sasi and Sasi’s business partner Yoram Gabay with their new venture, which brings the tastes, smells and atmosphere of the shuk to an unsuspecting location tucked inside a business park northwest of the city’s main Jewish neighborhoods along the Bathurst Street corridor. The kosher restaurant offers all the typical Israeli (meat) comfort foods, but it is the delicious, fresh laffa — a full foot in diameter — that is its biggest draw.

Sasi, 43, and Yoram, 42, both wearers of large, white-crocheted yarmulkes, opened the current incarnation of Dr. Laffa, with its faux-Jerusalem stone décor and young ex-pat Israeli waiters, three months ago. They had outgrown a nearby location where they had set up a few tables and chairs inside Yoram’s commercial pita bakery (where Gabay had invited Haba to set up his taboon in 2009). The partners, originally intent only on baking pita and laffa, ended up expanding the menu because of customer demand.

“Fuad was visiting from Israel and helping Sasi with the laffa baking,” Yoram recalled in a conversation with The Jew and the Carrot at the restaurant. “Sasi would make himself and his father sabich [a laffa sandwich filled with egg, eggplant and potato] for lunch, and when bakery patrons saw it, they asked for one.” Now, there are long lines of lunch and dinner customers ordering huge sandwiches and generous plates of the partners’ delicious hummus, shawarma, falafel, shakshouka, and Iraqi kubbe, Moroccan fish, baklava and more. Their various salads (including grilled cauliflower, smoked eggplant, fennel and carrot, tabouleh and other varieties) are also excellent — very fresh, sugar-free, not too salty and flavored with spices they import directly from Machane Yehuda.

The specially built taboon is the heart of the operation. Constructed by hand out of bricks, concrete and a metal drum, it is powered by gas, like the one that Fuad baked with in Jerusalem (the original taboons in Iraq were fired with wood). The baker flattens the dough ball over a handmade pillow and inserts it into the oven, sticking it to the inside wall of the drum (around 12 laffas can be baked at a time). Only a few minutes pass before the dough is ready to emerge from the taboon as a large, thin, round laffa — slightly brown and crispy on the outside and airy and chewy on the inside.

Sasi told The Jew and the Carrot that before he came to Canada to start baking laffa, he had a large package of flour sent to him in Israel. He had the flour analyzed by a lab, which found it to be “the best in the world.” He experimented and figured out just the right proportions of flour, salt, yeast and water to use to recreate “the real thing,” as he put it. Fuad, who in his 60-year career only used white flour to bake laffa, is still getting used to the fact that Sasi and Yoram have decided to go with a part white flour, part whole wheat mixture. “People here are health conscious and were asking for whole wheat,” Sasi explained.

“We always order extra laffas to go,” Dr. Laffa patron Ruthe Swern told The Jew and the Carrot. She drives a considerable distance to Dr. Laffa from her downtown home about once a month. “This has been my first experience with laffa. The size is impressive; I don’t believe that I’ve ever seen such a large flatbread before,” she said. “We love to eat it as a snack by itself. It also seems to stay fresh for a few days or until my crew devours it,” she added.

Swern, however, lamented the fact that in the old location, “they used to have an assortment of laffas, but now they just offer one kind.” Indeed, there used to be different varieties like sesame and poppy, but Yoram and Sasi have decided to bake only plain laffa now. “We are baking hundreds of laffas a day and we are swamped with customers — there’s no time to make different kinds at this point,” Sasi said happily.