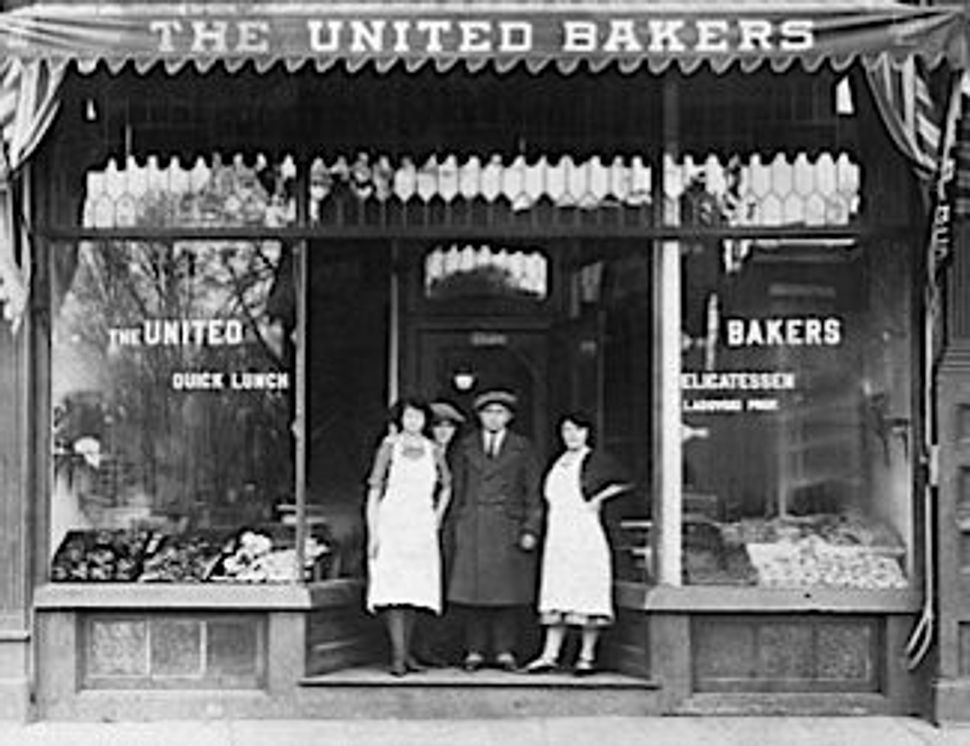 A photo of the shop in the 1920?s Image by Courtesy of United Bakers

They say the more things change, the more they stay the same. It’s perhaps a cliché, but it is true of Toronto’s United Bakers Dairy Restaurant, which is celebrating its 100th anniversary this year. While the menu of this, the oldest family restaurant in the city, has changed with the times, it has also remained faithful to the dishes that attracted its first customers in 1912.

“Young people like old food,” posited Philip Ladovsky, who co-owns the restaurant with his sister, Ruthie, as a main reason for the restaurant’s longevity. As a reporter for The Jew and the Carrot sat down with the siblings over a bowl of United Bakers’ famous beet borscht and a boiled potato, they recounted how the business got started and reflected on the food that brings approximately 1,000 patrons — many of them regulars — through the door every day. They believe that it is their menu’s balance between traditional “dorfishe cooking” (Middle and Eastern European country cuisine) and current standard family restaurant fare, along with the famous Ladovsky hospitality, that has kept United Bakers going strong for three generations.

Ruthie and Philip’s grandparents, Aaron and Sarah Ladovsky, immigrated to Toronto from Kielce (then part of the Russian Empire) in 1908, and by 1912 they had opened the 25-seat United Bakers on Agnes Street in the crowded inner-city immigrant neighborhood called The Ward. In those early years, it was known as “United Bakers Quick Lunch and Coffee Shop,” and its clientele were mainly workers who stopped in for an inexpensive, hearty midday dairy meal that reminded them of home. Aaron had brought his professional baking skills over from Kielce, and used them to make fresh challah, buns and bagels.

There was no formal menu in those early years, but patrons asked for gefilte fish, lox, herring, baked carp, pickled pike, blintzes, kasha with onion and noodles and cottage cheese. These are all still available today at United Bakers. A bowl of cottage cheese topped with a spoonful of sour cream was also once a favorite dish. This is no longer on the restaurant’s menu, but Phil and Ruthie are happy to oblige particular patrons who still come in asking for it.

In 1920, Aaron and Sarah moved the business to a new 60-seat location on Spadina Avenue, near the newer Jewish neighborhoods of Kensington Market and what is now called The Annex. In their new restaurant, referred to by patrons simply as “Ladovskys,’” they continued to serve the same kind of heimishe foods.

Hearty, thick soups have been a menu staple from the very beginning. While there are no longer any takers for noodle, rice and milk soup (which customers used to season themselves with sugar, salt and cinnamon), United Bakers still sells huge quantities of its famous green split-pea, vegetable, barley bean, and potato soups. Borschts remain popular, with cabbage and beet (hot or cold) varieties still on the menu. A menu saved from 1960 indicates that at that time Ladovskys’ also offered cold cherry borscht and spinach borscht, in season.

In the late 1970s Philip, now 60 and Ruthie, 61, took over the business from their father, Herman, who had succeeded Aaron and Sarah. In 1984, they opened a second restaurant at Bathurst St. and Lawrence Avenue, which by then had become the geographic heart of the Jewish community. Two years later, they closed the downtown Spadina location and concentrated all their efforts on the new spot.

The decision to open for business on weekends (the downtown locations had always been weekday-only restaurants) and the ensuing patronage of families with children dictated a change in the menu. Over the years, standard family restaurant items like grilled cheese sandwiches, Greek salads, omelets, veggie burgers, sweet potato fries, tortilla wraps, macaroni and cheese, spaghetti, and grilled salmon with sautéed vegetables started to appear.

United Bakers’ top-selling dishes today reflect both the new and the old. “Number one is our soups,” Philip shared. “Then comes our gefilte fish, Greek salad and then our tuna salad.” The front of the 160-seat venue boasts a bakery counter stocked with high quality breads, cakes and cookies. However, very few of those items are still baked on site. “My grandfather was really the one who had the baking skills. The baking stopped in the early 1960s,” Philip explained.

Like any successful restaurateurs, Ruthie and Philip have needed to know when to be sensitive to evolving culinary tastes and trends. But the minute you enter United Bakers, the vinyl banquettes, linoleum tile floor and simple wooden tables signal that respect for the past is integral to their vision as they move into the future. They believe it is consistency that has gotten United Bakers to its 100th year. “You don’t abandon what you do well,” said Philip. “We know where we come from,” Ruthie added definitively.