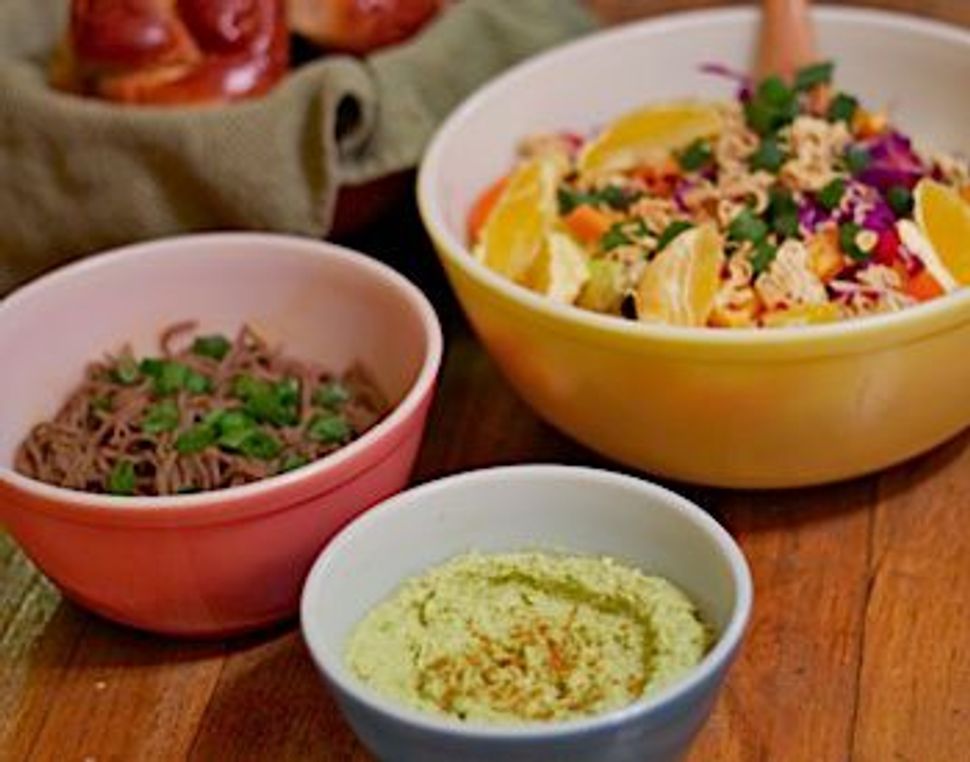 There is something to be said about men who can cook, and even more to be said about men who can’t cook but at least put in the effort. This post is for neither of those types. This is for those bachelors who probably live with other dudes in their first apartment out of college, celebrate Shabbat, and who are too busy going to the gym to realize that deli rolls and salads where a key ingredient is fake crab meat are not the key to a classy Shabbat dinner.

Take my neighbors for example: three dashing young gentlemen who host Friday dinners regularly, but like many, are often strapped for prep time, especially in the winter. A challenge indeed, but never in my worst nightmares did I expect to walk into their place one Friday afternoon to see a metal pan filled with fake crab meat and iceberg lettuce and Dan sitting on the couch, mixing up a boxed chocolate cake mix. Cue the forehead smacking. Call me a total snob, but no neighbor of mine will eat like that.

As someone who doesn’t regularly hold Shabbat dinners, I learned a lot in trying to help my neighbors out. For one thing, timing is one of the biggest deciding factors. “I want something different, something new… but we wouldn’t know how to make that,” said Eitan.

“The thing is we’re all working and coming home at three o’clock,” he added. The roommates usually conquer the time crunch by prepping on Thursday nights and using a slow cooker for cholent and other stews, but they still find themselves returning to the same few dishes such as roasted chicken and noodles with peanut butter sauce every week.

Dan also has a key priority: Girls. “Girls will always just have salad. If you go to a girl’s on a Friday night, there will be like six different salads,” said Alan in disgust. But earth to Alan and Dan — you don’t win girls with a turkey from the prepared section of Costco. So let’s find a happy medium: A meal that is something new, that can be prepared well in advance, and has a few of those healthier components that would appeal to their female dinner guests.

I made this meal Asian-themed to add some new flavors and make it a bit different from the typical Shabbat chicken. Many of the dishes share some of the same ingredients, which will make grocery shopping easier, and most can be prepared on Thursday night. Though the directions are minimal, there are four different components, so you may want to divide and conquer or make it potluck-style.

And P.S. guys, no lady needs to know you got these recipes from a cooking-for-bachelors blog post. My gift to you is all the credit when girls ooh and ahh at first bite (say it was your manly intuition or something). So have at it, boys!

Can be made on Thursday

Blend all of the ingredients in a blender or food processor until smooth, refrigerate until serving. Serve cold.

Can be made on Thursday

Stir together all of the ingredients except the pasta in a bowl. Then pour in the cooked pasta and mix some more. Refrigerate until dinner.

The salad and the dressing can be made Thursday night, and then stored separately and combined on Friday.

1) First, crunch up the packages of ramen noodles (set the seasoning packets aside) and stick them on a pan with sliced almonds and then toast in an oven set to 400 degrees for 5-10 minutes or until the noodles brown. Let cool, then store in a container until ready to use. Sprinkle them on top right before you dress the salad.

2) For the dressing, stir together the oil, rice vinegar, brown sugar, soy sauce, and seasoning packets from the ramen noodles.

3) For the salad, combine the romaine, red cabbage, pepper, tomatoes, scallions and tangerines or oranges.

4) Toss all dressing and greens and top with the crispy noodles and almonds.

Friday morning, put the first 8 ingredients in the slow cooker and turn it on low. It will be ready by the time you get back from services. Sprinkle with scallions and sesame seeds right before serving. Serve with rice.

Pick up something in Chinatown, or have the ladies bring it!