What It’s Like to Compete at the Olympics of Food 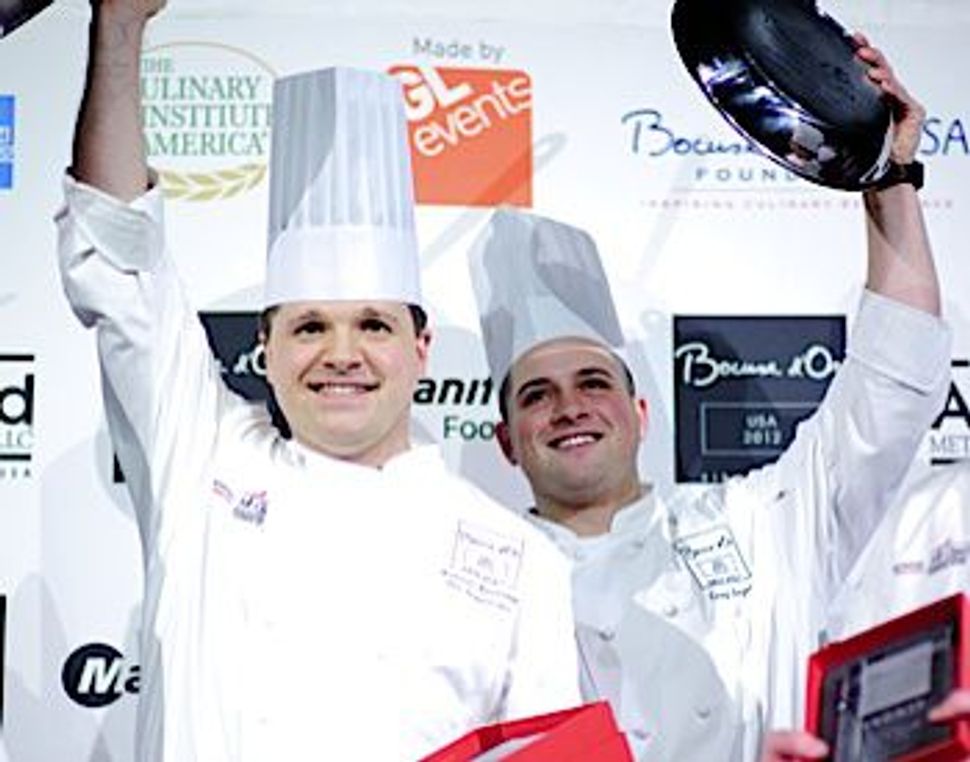 Behind every great chef are diligent commis, or assistant chefs. For Chef Richard Rosendale, the chef who won last week’s Bocuse D’Or USA competition, his commis was Corey Siegel, a 21-year-old Jewish trainee chef who works with him at the Greenbrier resort in White Sulphur Springs, West Virginia.

The Bocuse D’Or competition is considered the Olympics of cooking, and the USA segment qualifies American competitors for the global contest in Lyon, France next year. Rosendale and Siegel will compete against teams of chefs from around the world.

No American has ever placed better than sixth; but some food insiders think Rosendale and Siegel may change that. “Rosendale was preternaturally calm during the competition, and his kitchen was astonishingly clean throughout. His food was stunning and, based on the morsel I was lucky enough to taste after plating, delicious,” wrote Andrew Friedman, editor of kitchen-insider site Toqueland.

The Forward caught up with Siegel before he and Rosendale head to the French Laundry training facility for what Eater.com called an immediate and “intensive” two weeks to establish the overall direction of the team’s presentation — and, presumably, plot world (culinary) domination.

Michael Kaminer: What was the atmosphere like at the Bocuse d’Or USA finals on Sunday? How nervous were you?

Corey Siegel: The atmosphere was incredible and it was such an exciting event. The loud music and cheering crowd was such an adrenaline rush. I was actually not nervous at all. I was so focused that the first time I looked up was four-and-a-half hours into the competition and by then there were so many people cheering for us that it felt more comforting than anything.

Can you give us a hint of any themes that might emerge for the US team next year in Lyon?

One Idea we are toying with is taking to the French roots and looking at classic flavor profiles, then we are figuring a way to combine them with modern day cooking techniques to hopefully wow on the world stage.

Where did you grow up? As a kid, what kinds of food influences surrounded you?

I grew up in Buffalo, NY. I was always very excited when we would go to my grandmother’s house because I knew she would probably be cooking a delicious meal. My mother, as well, went to the Culinary Institute of America and I would listen to her talk about food 24/7.

Was there Jewish cooking that changed how you saw meals and food?

My grandmother would cook a lot of Jewish meals for our family and it was always such a treat, since my mother very rarely cooked. This was always very exciting and it helped me appreciate the culture that comes along with food.

Do you prepare any Jewish specialties at home? Have you ever included anything with a Jewish flavor — literally or figuratively — on a restaurant or competition menu?

Matzo ball soup is a great childhood memory of mine that I still keep alive to this day when I’m cooking at home. Actually in the Bocuse d’Or USA Finals competition…we applied the concept of making a great matzo ball soup when we prepared our potato dumpling with chicken coq au vin filling.

After the Bocuse D’Or USA and Lyon, what next? Do you hope TV networks will knock down your door to try transforming you into a gigantic brand?

I greatly appreciate how much culture is associated with food and plan on traveling the world exploring new cuisines. With this great opportunity to compete in the Bocuse d’Or, I am fortunate enough to be able to start my traveling and be able to follow through once the competition is over. TV networks are a fantastic way to keep the excitement of food alive and it would also be a great experience to be a part of that.

What’s your personal passion when it comes to cooking and food?

Cooking with seasonal ingredients and the understanding that food is an experience and a culture that brings people together. It is such a great feeling to know that I can change someone’s day simply because I fed them.

You can only take five ingredients into a kitchen. What would they be?

What would your last meal consist of?

A grilled cheese with Gruyere and artisanal sourdough.

What It’s Like to Compete at the Olympics of Food