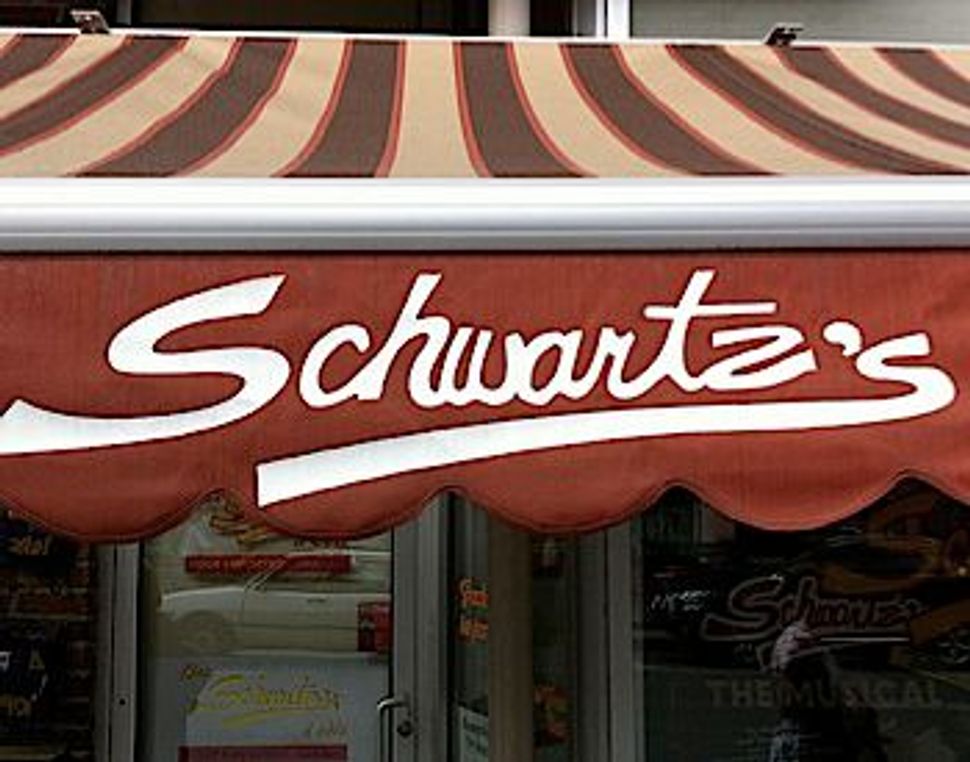 Schwartz’s Charcuterie Hebraique de Montreal Inc. — “Schwartz’s Hebrew Delicatessen of Montreal” — has been one of the few constants on mercurial Boulevard St-Laurent, the storied street whose low-slung storefronts loom large in Montreal’s Jewish-immigrant history. The oldest deli in Canada, Schwartz’s has evolved from a heymish neighborhood haunt to a bona fide destination whose devotees include food adventurer Anthony Bourdain.

But change is finally coming to Schwartz’s, according to the Montreal Gazette. Owner Hy Diamond, who took over the iconic 84-year-old deli in 1990, is set to sell the place to a group of investors headed by Montreal restaurateur Paul Nakis, the money behind several local dining chains. Rene Angelil, otherwise known as Mr. Celine Dion, is reported to be one of the investment partners.

Diamond had resisted expanding the eatery beyond its single location but local observers are speculating that plans for a Schwartz’s franchise may be in the works. “If the purported price of $10 million is correct, I’m guessing that for that amount of money, they might want to do something with the brand,” said Bill Brownstein, the Gazette columnist whose bestseller Schwartz’s Hebrew Delicatessen: The Story inspired a hugely popular stage musical last year.

Opened in 1928 by Romanian Jewish immigrant Reuben Schwartz, Schwartz’s star has barely dimmed since; lines continue to snake out the door, and on summer weekends, tourists wait patiently for a turn at one of the famously cramped tables or bustling counter inside the diminutive deli. It’s hard to overstate the social, cultural, and culinary significance of Schwartz’s. For lovers of smoked meat, the Montreal delicacy of cured, salted beef that’s the cousin of pastrami, Schwartz’s has been the standard-bearer in a sea of imitators and mass-produced packaged meats. For local Jews, Schwartz’s has been a symbolic link to a rich Eastern-European immigrant past that’s fast fading in a part of town that continues to gentrify at warp speed. And for Montrealers in general, the place still represents a kind of authenticity at a time when international chains are invading the local landscape.

“It’s one of the few Montreal landmarks that’s known around the world, maybe along with Celine Dion and Cirque de Soleil,” Brownstein told the Forward. “Delis have come and gone. But the cachet is that Schwartz’s is a little hole in the wall that’ll never make it into the pages of Architectural Digest. It’s the kind of nostalgia that people relate to.”

For me, Schwartz’s holds very particular childhood memories; before St. Lawrence Street — as it was then called — went glam, it was the anchor of a gritty district where immigrant-owned produce shops and fish stores abutted discount clothing emporia and Portuguese bakeries. Since my grandfather and father were involved in some of the factories nearby — many of which have now converted to lofts or gallery space — a smoked-meat sandwich at Schwartz’s was the treat after hours at their workplace. The smoked meat was addictive, along with superlative pickles and floppy Montreal French fries.

If Schwartz’s does franchise, Brownstein doesn’t think it’ll bode well for the deli or its customers. “I don’t think you can do quality control on that scale. Schwartz’s works because it’s one location. There are no preservatives or chemicals. There’s 80 years of flavor embedded in its smokehouse. I don’t think you can replicate that with stainless steel,” he said. “You’d also lose that democratic element of lineups and strangers pushed against each other at the same table.”

In the meantime, plans are underway for another expansion — of Brownstein’s deli-inspired musical, Schwartz’s: The Musical. The show will be produced in Montreal again this year, and may debut in Toronto. But no changes are planned. “The musical is fixed in a certain time period,” Brownstein said. “If anything, the theme is more relevant than ever: fear of franchise.”