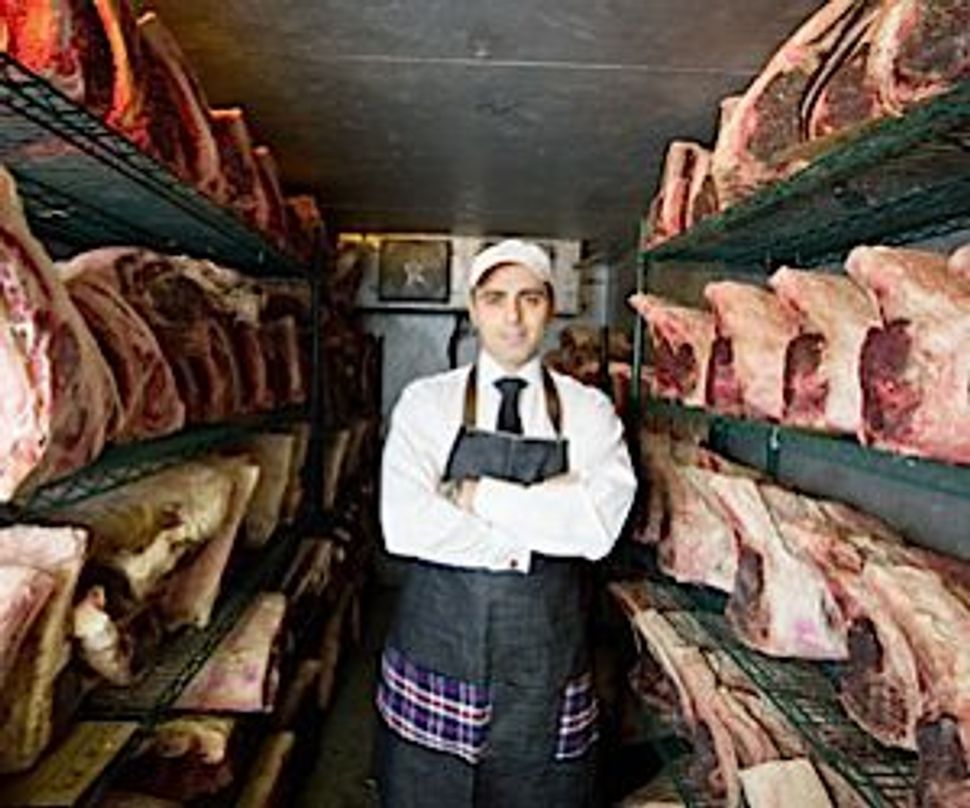 If you can imagine a Dean & Deluca for the kosher set, then you’ll get the gist of Prime Butcher Baker, the new marketplace from Joey Allaham — owner of Prime Grill, Prime KO and Solo — which opens on Manhattan’s Upper East Side this Wednesday.

The 3,000-square-foot gourmet food market has a sleek and modern décor and will sell both prepared foods and high quality artisanal ingredients.

Allaham — a trained butcher — is most excited about the meat, which will be front and center thanks to a dry-aged beef window that’s visible from the street. Much of the wide meat selection will be grass-fed, something that is still catching on in the kosher world. “People don’t realize that the quality of meat depends so much on how an animal was treated while it was alive. It’s important what they eat, how much they sleep, everything,” he said.

Prime Butcher Baker (whose nickname is “BB Prime”) will also sell harder-to-find kosher meats like venison. Workers will be on hand to suggest preparation styles. “We’re going to have all the chefs from the restaurants here in the beginning to teach our staff,” Alaham said.

Another jewel in the market’s crown will be its fish, which comes via sustainable seafood supplier Local Ocean. And while Allaham said he probably won’t sell sushi at BB Prime, the fish will be sushi grade. (Prime KO’s Japanese chef will be on board, creating Japanese dishes to take out).

In addition to a butcher counter, the shop will stock prepared Ashkenazi staples and Middle Eastern dishes like Lebanese specialties kibbe and lahmajun prepared by Lebanese chef Souad Nigri. Shoppers will also find the upscale packaged dry-goods (we spotted a sushi kit we couldn’t believe was kosher!).

The entire back section of the market is dedicated to sweets, with the restaurants’ pastry chef, Felencia Daries, relocating her pastry kitchen there. All cakes and pastries sold on the premises will be parve and they’ve recruited a special chocolatier to make parve chocolates (while we toured the place, they were stocked with chocolate-covered pretzel sticks and s’mores). Eventually the bakery plans to make its own challah, too.

The one thing the shop won’t have is a large dairy section. Almost all of the food at BB Prime is meat or parve, and dairy items will have to be pre-packaged. Though Allaham says they will eventually start selling harder-to-find, gourmet cheeses.

If you’d rather have the food prepared for you than pick up some groceries, Allaham will offer a chef’s table option daily after the market’s 7 p.m. closing. Up to 12 guests will be able to chose anything from the store and have it prepared however they choose. The option, which will be available on Shabbat as well will come with wine and carries a hefty $3,000 price tag.

The market plans to offer holiday-themed specials, like Purim baskets (though Allaham said they’re toying with the idea of offering a meat basket rather than the traditional candy basket) and will become completely kosher for Passover before the holiday.

Allaham, who lives on the Upper East Side, said he saw a need for a place like this in his neighborhood, but they’ll also deliver to the Hamptons and all over city. Eventually he hopes to expand into catering. The team says that, overall, prices will be comparable — if not lower — than other kosher markets in New York.

Though he already owns three successful, upscale kosher restaurants, Allaham says he’s always been drawn to the retail business, which he described as “particularly challenging.” A self-proclaimed “control freak,” he found the challenge difficult to pass up.

“The timing was right. With the way the economy is now, you can’t rely solely on restaurants. Home-style cooking is back,” he added.