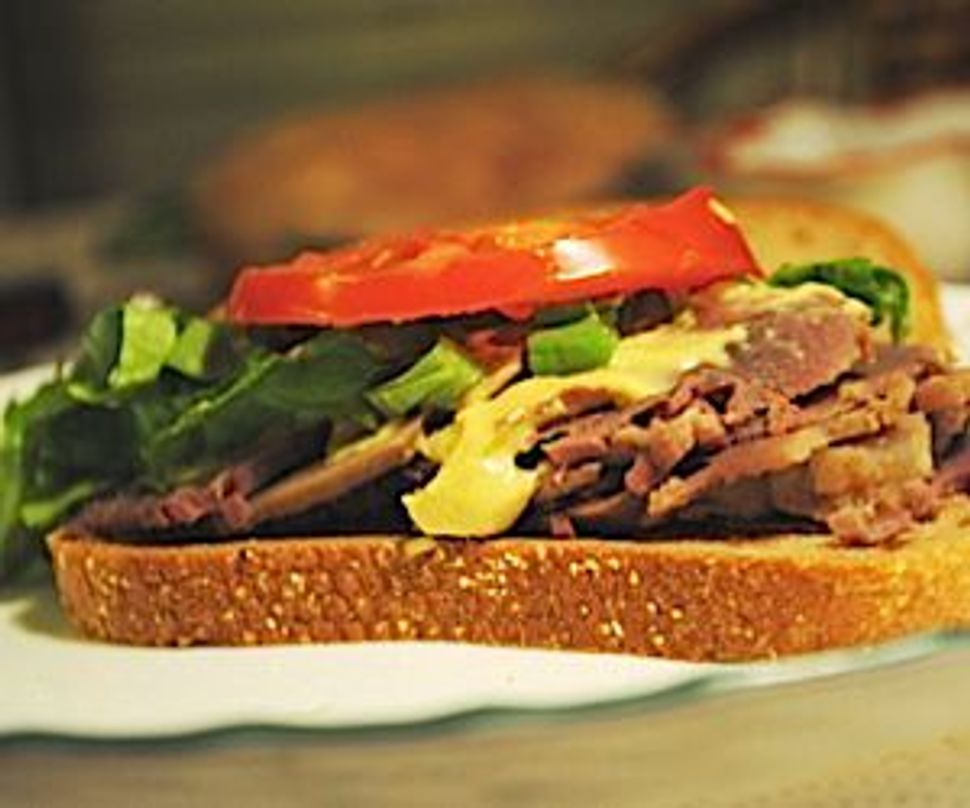 To an American ex-pat, there’s something incredibly nostalgic about an old-fashioned corned beef sandwich. After 40 years abroad, there are few American foods I miss anymore; in fact I shamelessly brag about Israel’s beautiful, fresh, flavorful, local food, all the time. And although corned beef all ready for cooking may be found in Israeli supermarkets, it often has an unpleasant chemical overtone unless you buy from an expensive private butcher. For that American-style taste that I remembered, which came from a delicious mix of pickling spices, I waited till I flew to New York to visit family.

My son, who’s a proud New Yorker, offered a jet-lagged me anything I wanted for my first dinner in town. Something French? Chinese? No. What I craved was a corned beef sandwich, the kind I used to eat when I was little and lived in Long Beach, NY. “Lead me to a deli,” I said.

When sat down at a kosher deli the sandwich was big enough and the beef tasty — but I felt rather sad. Where was the hominess of the small local deli from the Kennedy era? This chilly, white-tiled room like a cafeteria, with people sitting as far away from each other as they could contrive to, put me off. I shivered a little. The meat was as pink and juicy as I remembered, but somehow I didn’t get that anticipated rush of flavor memory.

Perhaps it was silly of me to hope for a Proustian return to an earlier time with a corned beef sandwich. Which led me to muse: Proust’s family were originally Jews, albeit converted to Catholicism. Did they ever enjoy a throwback dinner of corned beef? Not likely. But why is corned beef so particularly Jewish anyway?

One explanation is that kosher meat traditionally comes only from the front of the animal, which is tougher than the meat from the hindquarter. Salting and slow-cooking these tougher, cheaper cuts results in tender, flavorful beef that slices thinly. When waves of Jewish immigrants arrived in America in the late 19th century, they had never seen so much beef. For the Jewish poor, corned beef was holiday food, a dish to save up for. But influenced by the local German’s preserved meats and sausages, they rapidly learned to turn brisket and other cheap cuts into deli staples. For Jews rising out of poverty and into the working- and middle-class, beef became more accessible and they remained faithful to their taste for it.

On returning home I was determined to make corned beef myself. After searching my cookbooks and the net, I found a recipe whose ingredients suited my taste from Alton Brown’s Good Eats. The brine is easy to make and filled the kitchen with a divine smell. Then two weeks in the fridge, followed by a few hours of gentle cooking. I sliced the cold meat carefully and ate.

Yes. That was the taste — all the old memories came flooding back. I confess, I don’t know what the difference was. Probably being in home my own kitchen helped. But as I nibbled at the spicy meat with its just-salty-enough bite, I recognized that delicious, old-fashioned deli taste of my childhood, and was satisfied.

1) Place the water into a large 6 to 8 quart stockpot along with salt, sugar, saltpeter*, cinnamon stick, mustard seeds, peppercorns, cloves, allspice, juniper berries, bay leaves and ginger. Cook over high heat until the salt and sugar have dissolved.

2) Remove from the heat and allow to cool, covered, until it reaches a temperature of 45 degrees F. To hurry the process you may place it in the refrigerator.

3) Once it has cooled, place the brisket in a 2-gallon zip top bag and add the brine. Seal and lay flat inside a container, cover and place in the refrigerator for 10 days. Check daily to make sure the beef is completely submerged, and turn the bag over to stir the brine.

4) After 10 days, remove from the brine and rinse well under cool water. Place the brisket into a pot just large enough to hold the meat, add the onion, carrot and celery and cover with water by 1-inch. Set over high heat and bring to a boil. Reduce the heat to low, cover and gently simmer for 2 1/2 to 3 hours or until the meat is fork tender. Remove from the pot and thinly slice across the grain.

*Cook’s note: The original brine includes 2 tablespoons of saltpeter, or potassium nitrite. Saltpeter is traditionally used to bring out the appetizing red color we associate with corned beef. Having discovered that it’s used in making gunpowder and fertilizers, I chose not to use it, so my corned beef is an appetizing brown color with a rosy interior.