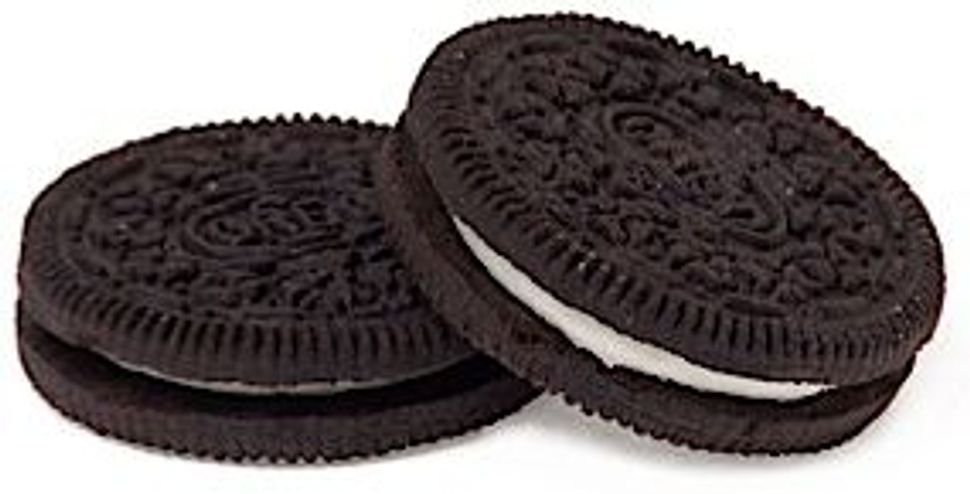 In honor of the 100th anniversary of the Oreo this week, writer Jeffrey Yoskowitz ruminates on the cookie’s unique legacy. When the Nabisco corporation released kosher Oreos in 1998, it was only after one of the most expensive kosher transformations in corporate history. The result: An iconic American snack food that was once manufactured with lard was finally accessible to the Jewish community.

In January of 1998, my social studies teacher Mrs. Vaknin brought the newly available kosher Oreos into my middle school classroom. She passed around the cookies to my Jewish day school class as if they were spectacles to behold, even though my peers and I were pretty familiar with kosher crème-centered-chocolate cookies — after all, we had eaten plenty of Hydrox in our lives. But the Oreo was different, we were told. This cookie was somehow vastly more significant than most other cookies.

To be fair, I was pretty excited about the Oreo going kosher, and I found it more than amusing when Rabbi Joshua Hammerman wrote in the oft-quoted op-ed in The New York Times that the kosher Oreo was “a telltale sign that Jews have finally made it.” Hammerman also wrote that the Oreo going kosher was the biggest thing to happen next to a Jewish president. He didn’t have to outright say it, but he was pretty much ushering what can best be described as a new Jewish epoch: the Age of Oreo Judaism.

That Jews could have so much faith in a cookie seems surprising, especially considering that when it comes down to it, the Oreo just isn’t that exceptional. The enthusiasm, of course, wasn’t just a result of the fact that those who adhere to archaic dietary laws could now enjoy a delicious cookie, but that one of the world’s largest multi-national corporations finally embraced this scrappy religious minority. In fact, for nearly 80 years as other food companies were converting their facilities to meet kosher standards, Nabisco held out. When Nabisco recognized the Jewish market, it was a crystallizing moment for many in the Jewish community and a testament to the strength of the kosher food industry. In turn, Jews embraced Nabisco.

So what if we turned our backs on Sunshine Biscuits, the other, smaller corporation that sold Hydrox, the kosher alternative to the chocolatey-crème-filling cookie for nearly a century?

As far as cookies went, the two competitors were pretty similar. You could twist off the ends and dunk them both in milk. They were both enjoyable to eat and delicious when crushed and put on ice cream. Sure, the name “Hydrox” may never have been as desirable, the Oreo may have been really well marketed and there may have been subtle differences in the quality of the cookie exteriors. But who are we kidding? We were so eager to abandon the underdog. In so many ways the Jewish desire to be American trumped our loyalty to a cookie that better represents the Jewish people and Jewish culture. Let’s not forget that Hydrox was around before the Oreo and was less popular for most of its existence.

The very fact that at the time the kosher Oreo was made available in 1998 it was the most popular cookie in America was what made all the difference. Jews were now, in yet another way, included in a very basic part of American mass culture.

I remember in those early Oreo years feeling as if soon I would be able to relate to the TV commercials in which grandparents sit down with their grandchildren, passing down the “time-honored” tradition of twisting and then dunking cookies in milk. I wanted to dunk Oreos with my grandparents, even though they already practiced a far richer Eastern European dunking ritual often involving tea and honey cake or tea biscuits, usually as they shared their tales of survival during the Holocaust with me.

Sometimes I miss those pre-Oreo Judaism years, when our food options were slightly more limited, but our collective sense of self seemed more in tact. I miss Hydrox too, if only for what the cookie represented: a time when American Jewish identity could be wrapped up in something as simple as a cookie we could or could not eat.

Share your own Oreo and Hydrox stories with us in the comments.