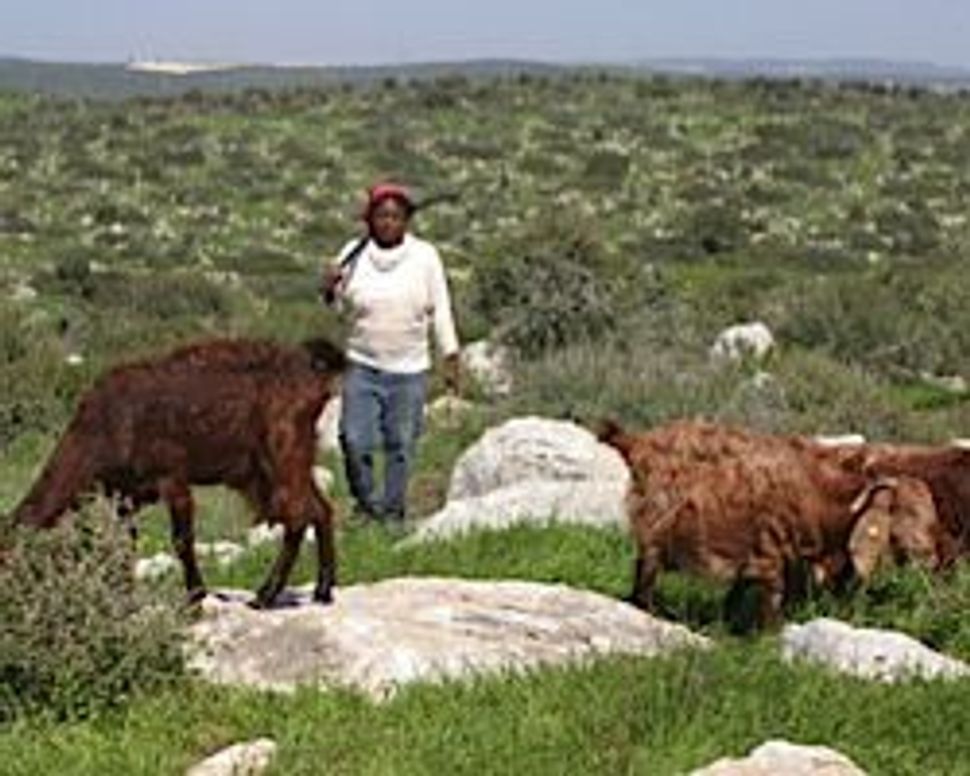 Home-cooked meals in citrus-tree-lined gardens, glasses of wine overlooking rolling green hills, and fresh cheeses a stone’s throw from the grassy pastures — what better reason to go touring the Judean hills outside Jerusalem?

The bucolic Judean hills are home to a few towns, the largest of which is Beit Shemesh, and dozens of smaller communities, many of which are connected to the outside world via winding roads and no more than a few buses a day. While the area does have some relatively new occupants drawn to the rural lifestyle, many residents are immigrants who have been living there since they left countries including Morocco and Iraq 50 years ago.

The region is not a particularly wealthy one. But the area has plenty of room for small agricultural businesses, including a growing number of dairies and wineries. And while homes are not luxurious, many of the residents have yards filled with fruit trees if not a few goats, too.

To call this annual happening a festival is perhaps a bit misleading. While it does include a few actual events, including a Purim party with local breweries and organized tours every Friday, the bulk of the festival is the individual people behind it. The council publishes a list of several dozen participating establishments, and it’s up to you to call, speak with the owners and coordinate a time to visit the private homes that double as wineries, dairies or restaurants.

The participants include many home cooks covering a wide range of cuisines, who host guests in their tree-lined yards. There’s a large number of Kurds and a few Moroccans and Yemenites, too, but the representation includes cultures as diverse as Cochini, Swedish and Argentine.

Ultimately, a large part of the fun is getting to know the individual people behind the delicacies.

There’s the boutique Agur winery in the town of Agur, owned by philosopher and cabinetmaker Shuki Yashuv, who throws out pearls of wisdom about wine and life. The winery produces 30,000 bottles of wine a year, including a few thousand for export, from grapes grown in partnered fields around the Judean hills.

On the other end of the scale is the Zafririm winery in neighboring Zafririm, run by archeologists Shaike and Lori Lender. This family winery produces only 4,000 bottles. All of its grapes come from the family’s yard and the valley below, and the wines are sold exclusively on site.

There’s the Tzuk dairy, with its hilly goat farm hidden behind a bumpy, pitted access road, which sells its cheeses through its own boutique in Tel Aviv. And then there’s the Buie family’s Mozalis dairy in Luzit, whose cheeses are sold only out of the family home, and only during seasons when the goats and sheep, which roam the verdant hills behind their home, are producing milk.

Bubbly Bathsheva Buie led us on a little trek through the flower-spattered fields where her sheep and goats graze, under the watchful eyes of her sisters. Buie, who speaks perfect English thanks to her American immigrant parents, explained how she milks the animals by hand — 30 animals a day, for a total of 25 liters of milk. She adjusts her milking based on how much cheese she thinks she’ll sell that week, she noted.

In olive-tree lined Tarum, we met Shulie Dagan, who has a small Yemenite bakery in an otherwise unmarked home basement with little windows overlooking the green gardens outside. When we arrived, she was preparing bubbly lahoh flatbreads in pans on burners that lined a wall. Most of her business is filling orders from establishments in neighboring communities, not customers like us, yet she greeted us warmly, offering tastes of fluffy, flat pitas; spicy skhug, a Yemenite cilantro chutney; frothy hilbeh dip, made from ground, whipped fenugreek seeds; and golden, Yemenite-style chicken broth

Back in Luzit, you can meet Zohara Ben-Hamu, now in her 60s, who immigrated from Morocco as a young woman. If you ask, she’ll tell you how long she’s been hand-rolling her own couscous — since she left her parents’ house to marry, at the age of 13. Now a matriarch with a dozen children and several dozen grandchildren, she hosts groups for traditional Moroccan-Israeli meals that start with a wide range of salads and include chraime — firey red stewed fish — her hand-rolled couscous, meats and home-baked pastries ranging from yeast cakes to traditional Moroccan fried dough.

People are drawn to the area by the beautiful landscape and its biblical roots, as well as the focus on ethnic foods and other culinary attractions, said Lori Lender.

But the relationship is symbiotic: Many of these small businesses exist by virtue of the festival, she said.

“Granted, it takes place one month of the year, [but] it’s been a catalyst for those who know how to use it, to create small, food-based tourist businesses that otherwise might not have developed,” she said.

The festival organizers offer organized tours on Friday mornings that include stops at three different establishments, leaving from Beit Shemesh. Call 02-990-0903 to book.

Upcoming events include art shows in Srigim, Givat Yeshayahu and Zafririm this weekend, March 23-24, 10 a.m.-5 p.m., in the artists’ studios and homes.

More information, including events and the full list of participants, can be found on the festival’s website (site is only in Hebrew).