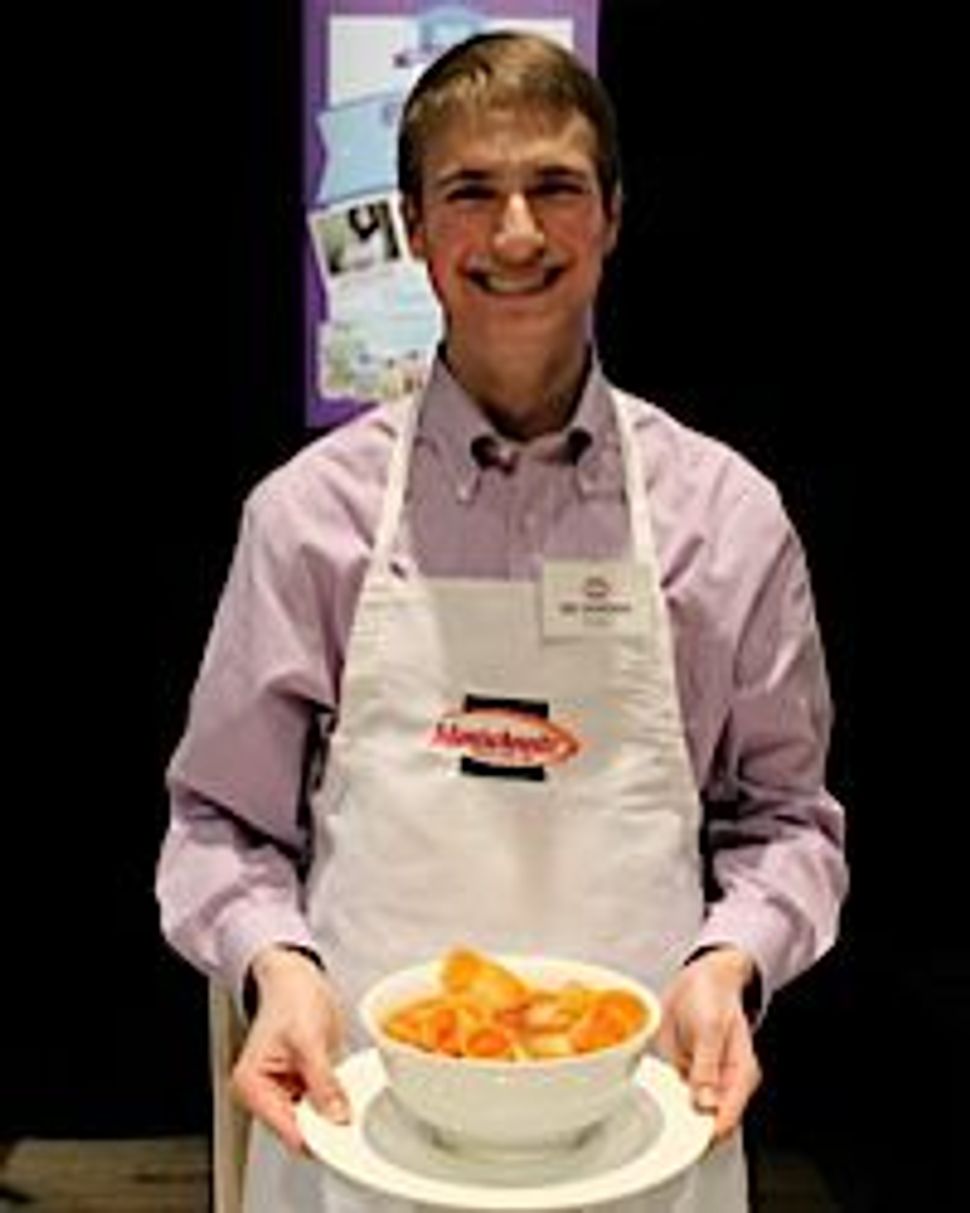 Image by Courtesy of Manischewitz

It’s no surprise that the winning dish of this year’s Man-o-Manischewitz cook-off was an update on a classic recipe. As he introduced his “Mod” Matzo ball soup, Eric Silberman, a 20 year old Princeton University student from Lincolnwood, IL, compared his concept to Manischewitz’s rebranding: he reinvented a classic, giving it a modern sensibility, just as the company that has become synonymous with Jewish food releases a new line of products to appeal to a younger generation.

Silberman grew up with matzo ball soup; it was an essential dish on his family’s Shabbat table. But in his late teens, he took over the family staple, shaking up the recipe by cooking the matzo balls in the broth, roasting the vegetables separately, then adding them to the finished product. Silberman’s matzo balls were small but light, something he achieves by separating his eggs and beating the whites till frothy before combining them with the rest of the eggs and the matzo ball mix. He also added cumin and a can of unflavored diced tomatoes for a south-of-the border flair.

The rest of the dishes entered were less traditional, and included crispy chicken with cherries, gnocchi with tomato sauce and mascarpone, chicken puff sandwiches and torte vegetali, a quinoa, bowtie noodle and vegetable dish baked into a potato crust, and topped with mozzarella cheese. The contestants were chosen from thousands of applicants across the country who were asked to prepare their favorite recipes using one of Manischewitz’s all-natural broth flavors. Five finalists were chosen and appeared at the JCC Manhattan last week, where they were given an hour to cook their dishes in front of the crowd.

Those lucky enough to be in attendance got to sample everything, as cooks at the JCC prepared huge quantities of each dish for the audience. The chicken puff sandwiches, presented as triangle-shaped turnovers of savory chicken in a puff pastry crust, seemed to be the crowd’s favorite, as the kitchen ran out of those midway through the serving while plenty of the offerings remained.

Judging the competition were cookbook author Jamie Geller, editors from NY1, Ladies Home Journal, Family Circle and Self, in addition to celebrity guest judge Claire Robinson, host of Food Network Challenge. They scored the dishes based on taste, ease of preparation and originality.

As winner, Silberman walked away with $25,000 in prizes. But before the judging began, Chef Robinson urged the competitors — as only a Jewish mother can — not to focus solely on winning but rather to be proud of being selected and to enjoy the experience. “You all have chef’s hearts,” she said smiling, “and chefs just want to feed people.” by Eric Silberman:

2) Roast in preheated oven for 20-25 minutes until brown, mixing halfway to ensure even browning.

3) While vegetables are roasting, prepare matzo balls according to package directions with a few “secret” changes. Crack 2 eggs, into one mixing bowl, but instead of beating everything together right away, tilt the bowl and try to beat some of the whites separately until frothy, and once done, place the bowl back on the counter and incorporate the yolks as well. Add remaining 2 tbsp vegetable oil and whip again until fully incorporated and bubbly. Add packet of Manischewitz® Matzo Ball mix and stir just until combined. Refrigerate for 10 minutes.

5) Remove matzo ball mix from fridge. Form into balls with hands, just under the size of ping pong balls; makes about 8.

6) Drop matzo balls into broth, cover and lower heat and simmer for 12-15 minutes. When vegetables are finished roasting, remove from oven and set aside briefly. Remove cover from pot and add remaining 2 cups Manischewitz® All Natural Vegetable Broth and diced tomatoes. Add vegetables and bring soup to boil over medium-high heat. Cover and reduce heat to low and simmer for 10 more minutes. Uncover and add salt, pepper or cumin to taste.