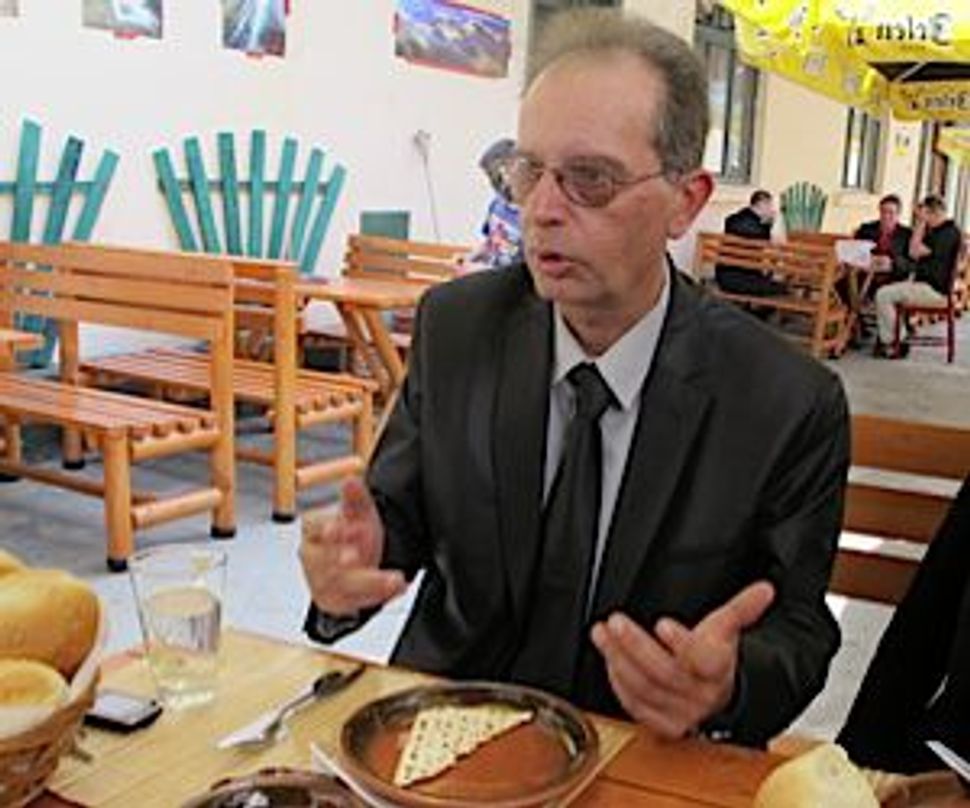 Dragan Jankovic, a slim bespectacled man with a quick smile and thinning hair, is the living local repository of Jewish heritage in Pirot, an ancient market town in southeastern Serbia whose Jewish community was wiped out in the Holocaust. A photo-journalist who long worked for a local newspaper, Jankovic is a devout Christian, but became fascinated with Jewish history and culture as a student in Belgrade more than two decades ago. He made friends there at the Jewish Historical Museum, and since returning to Pirot he has spent years collecting material and memories about Jewish history in his hometown.

Dragan was our guide when I spent a day in Pirot during Passover as part of a fact-finding team examining the state of Jewish heritage sites in southern Serbia. “Ah, Passover,” he said. “Matzo! I tasted it once, 20 years ago, in Belgrade — someone from the Jewish Museum gave it to me, and I’ve never forgotten!” He smiled — wistfully, I thought — at the memory.

Later, at lunch, a lavish Serbian spread in a courtyard restaurant, I told him I would pass on the fluffy round Serbian loaves that came with the meal. But, “I’m traveling with matzo and there’s a big box of it in car,” I said. He rushed out and returned with a stack of crispy sheets, which he carefully laid on a plate and placed on the crowded table. It made a delicious accompaniment to the local cheese — fresh young white cheese, a spicy liptauer-like cheese mixture called urnebes, and the hard yellow Kackavalj sheep cheese that is one of Pirot’s signature local products.

Pirot is located on one of the main trade routes between central Europe and Turkey, and Jews, active as traders and merchants, had lived there since Ottoman times. By the eve of World War II, the community numbered fewer than 200. Pirot was annexed by Bulgaria, and all 178 Jews in town were deported to death camps in March 1943. The few remaining traces of Jewish heritage in the town include a crumbling old mikveh and a new Holocaust memorial.

During the meal, I asked Jankovic if Jews had left any impact on local cuisine. To my surprise, he said Jews had played a major role in the manufacture and merchandizing of the famous kackavalj cheese.

Kackavalj “is much more than a semi-hard, spun, paste cheese,” Radoslav Pejčić, coordinator of Pirot’s Slow Food chapter, explained in an interviewer last year. “It has been this region’s treasure and symbol for centuries, travelling from Thessalonica’s port to Alexandria and then into markets all over the world.”

Dragan told us that according to legend, Jewish cheese merchants had at one time taught local peasants how to make kackavalj. Dragan’s source turned out to be the 1990 book “Jews in Pirot” by Jewish historian Jennie Lebl, which included a section on the cheese. Around the turn of the last century, every year the wealthy Jewish brothers Jakov and Nisim Papo would come to Pirot from Istanbul and buy up the much of the yearly milk production for cheese and butter from the region, which they would then export to Turkey and Egypt. Peasants would receive advance payment for their annual yield.

“The production of Kackavalj began in the spring and the cheese would be ready for transport and export once it ‘settled’ and became ripe at the end of summer,” Lebl wrote.

In addition to purchasing dairy products, she wrote, the Papo brothers also ran actual cheese-making workshops, where local producers “would come to watch and learn how the work was done, from the moment when, in the huge cauldron, milk would start boiling and then coagulate, through the use of a fermentation agent.

“Then this mixture was pressed to get rid of water, cut into pieces, put into woven baskets and immersed in boiling water to obtain color and elasticity….then kneaded and put into molds, to make pitas (cakes) weighing 5 and 10 kilograms. The cheese would remain in the molds for several days, one cake placed above the other, with sea salt between them. The more salt the cake ‘drinks,’ the better it ‘ripens.’ The whole procedure had to be carried out very accurately, for if anything went wrong, the cake would crack during drying and get moldy…..”

Jakov and Nisim Papo maintained close relations with Pirot for years. From time to time, the brothers would stay in the town for longer periods of time, wrote Lebl. Jakov Papo even married off his daughter to a man from Pirot. Whenever Jakov come to town, she wrote, it was an “event” for the city: “Papo was very generous and kind, but very short and weirdly dressed: he would wear a long “džube” (Turkish-style robe) and, since he was hard of hearing, he carried a long tube to hear better.”

Walking around Pirot, Dragan pointed out to us the photographer’s shop that had once been owned by Jews, and the sturdy stone fountain with water pipes on four sides that the Papo brothers had built in 1905 and that still stands in the center of the town. When we said our goodbyes, I made sure he accepted the half-kilo of matzo that remained in the box I had brought with me.