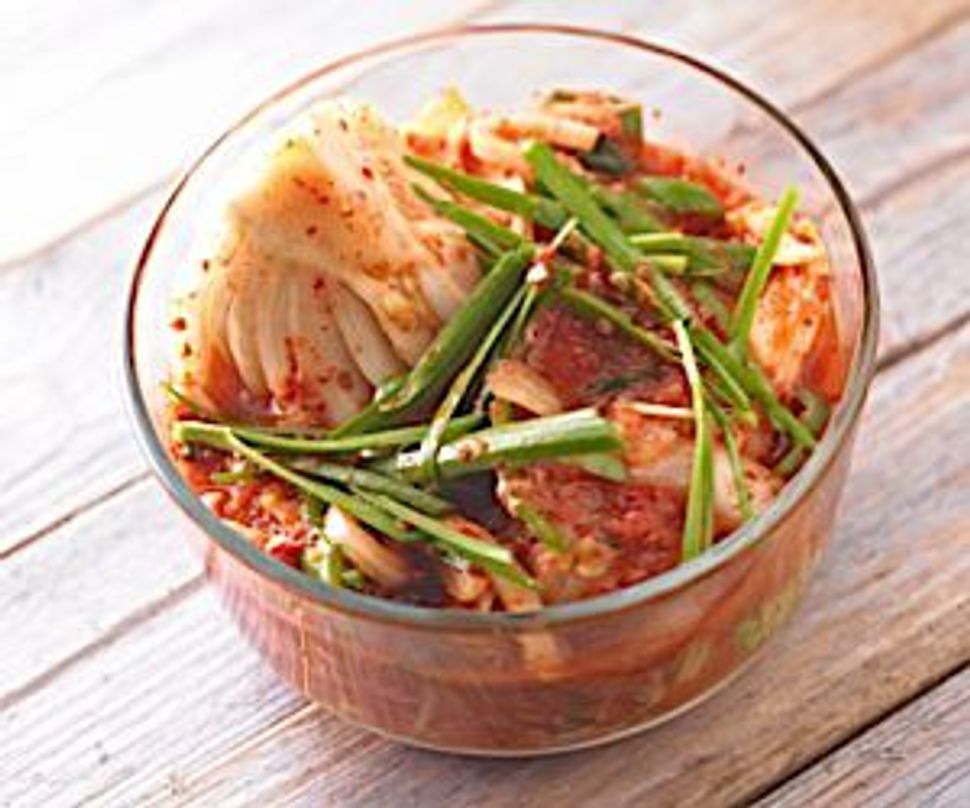 Sandor Katz is so intimately associated with the making of sauerkraut that he has adopted “Sandorkraut” as his nom de cuisine. The author of the book “Wild Fermentation”, Katz is a guru of sorts, spreading the gospel of one of the world’s most widely used culinary practices and in the process inspiring legions of followers to discover the ease and pleasure of home fermenting.

After discovering the book a few years ago on a farm I worked at in southern Vermont, I began to experiment with some of Katz’s recipes. The recipe I explored (and adapted) the most is his recipe for kimchi.

If you’ve ever encountered it — most likely on the table at a Korean restaurant — you likely understand the appeal of this fermented cabbage dish. It’s a national staple in Korea, which boasts over 100 recognized varieties. Katz cites a New York Times report saying that in 2008, when Korea sent its first astronaut to the International Space Station, the government spent millions finding a way to make kimchi that would not turn dangerous when exposed to cosmic rays. In other words, this is serious business.

In “Wild Fermentation,” Katz describes a method for kimchi making that is quite similar to his regular kraut recipe, which involves little more than shredding cabbage, tossing it with some salt, and submerging it under its own juices in a fermentation vessel. For kimchi, which is typically prepared spicy, he throws in some chilies and garlic. When it’s ready, it has the consistency and appearance of regular kraut but with some added heat.

It’s a fine dish, and easy to make. But it’s not the authentic, effervescent kimchi Koreans love, and I’m apparently not the only one who noticed. In his forthcoming magnum opus, “The Art of Fermentation,” Katz reports on the negative feedback to his original recipe, and makes a stab at improving things.

I’d already begun improving on Katz’s kimchi recipe before I got my advance copy of the new book in preparation for a profile in this week’s Forward. Katz’s improved guidelines are broadly similar to what I’ve played with in my own kimchi experiments. The first step is to find your nearest Korean grocery and get some chili powder. This is the crucial ingredient, and I was shocked to discover that the Korean market in Manhattan where I bought my first stash has an enormous display with a dozen varieties of the stuff. If you do nothing else, get yourself a bag. As Hillel said, “all the rest is commentary.”

My basic method for kimchi begins with wilting a head of Napa cabbage. I peel and wash the leaves individually, sprinkle some coarse sea salt on each side (don’t worry, we’ll wash it off later) and let it sit for several hours in the fridge, usually overnight. Then I rinse each leaf and give it a really firm squeeze (sometimes 2 or 3 squeezes) which breaks the cell walls and gets most of the water out. If possible, let the cabbage dry on a paper towel for another 20 minutes or so.

Meanwhile, prepare the schmear (I doubt this is what Koreans call it, but there’s no more apt word). I blend about a fist-size cube of daikon radish (make sure to cut it up a bit first), a few garlic cloves, and some grated ginger in a food processor until it’s a smooth pulp. Then I add about a half-cup of water, a spoonful of sugar, and one heaping cup of chili powder. A quarter-cup of fish sauce and some chopped scallions are nice too. The shmear should thicken up nicely.

Then, take each leaf and coat some of the paste on both sides, shaking off the excess, and press them firmly into a fermentation vessel. A simple glass jar works fine, just cover it with a cloth or a loosely fitted lid to keep out dust and flies. As in all vegetable ferments, you want to press the cabbage down hard so the moisture rises up above the level of the cabbage to act as a protective buffer. Sometimes this won’t happen immediately, but in a few days the water level should rise. If it doesn’t, add a little water. Now, wait.

It’s hard to say exactly how long. I’ve waited anywhere from three days to two weeks — sneaking little tastes along the way of course. Good kimchi has a distinctive sizzle. It almost pops on your tongue. I confess, I haven’t been as successful with this part. According to Katz, kimchi should ferment for far less time than regular sauerkraut (generally, just 2-4 days as opposed to a month). If you stick it in the fridge after a few days, the cabbage will continue to slowly ferment and rising carbon dioxide levels will apparently build up and create the sizzle. If this works for anyone, let me know.

Either way, this kimchi is amazing and it keeps for a long time. Once I have a nice big jar, I use it on nearly everything — sandwiches, salads, stir fry. I’ve eaten it with eggs on Sunday morning and with challah and wine on Friday night. Sandorkraut would no doubt be proud.