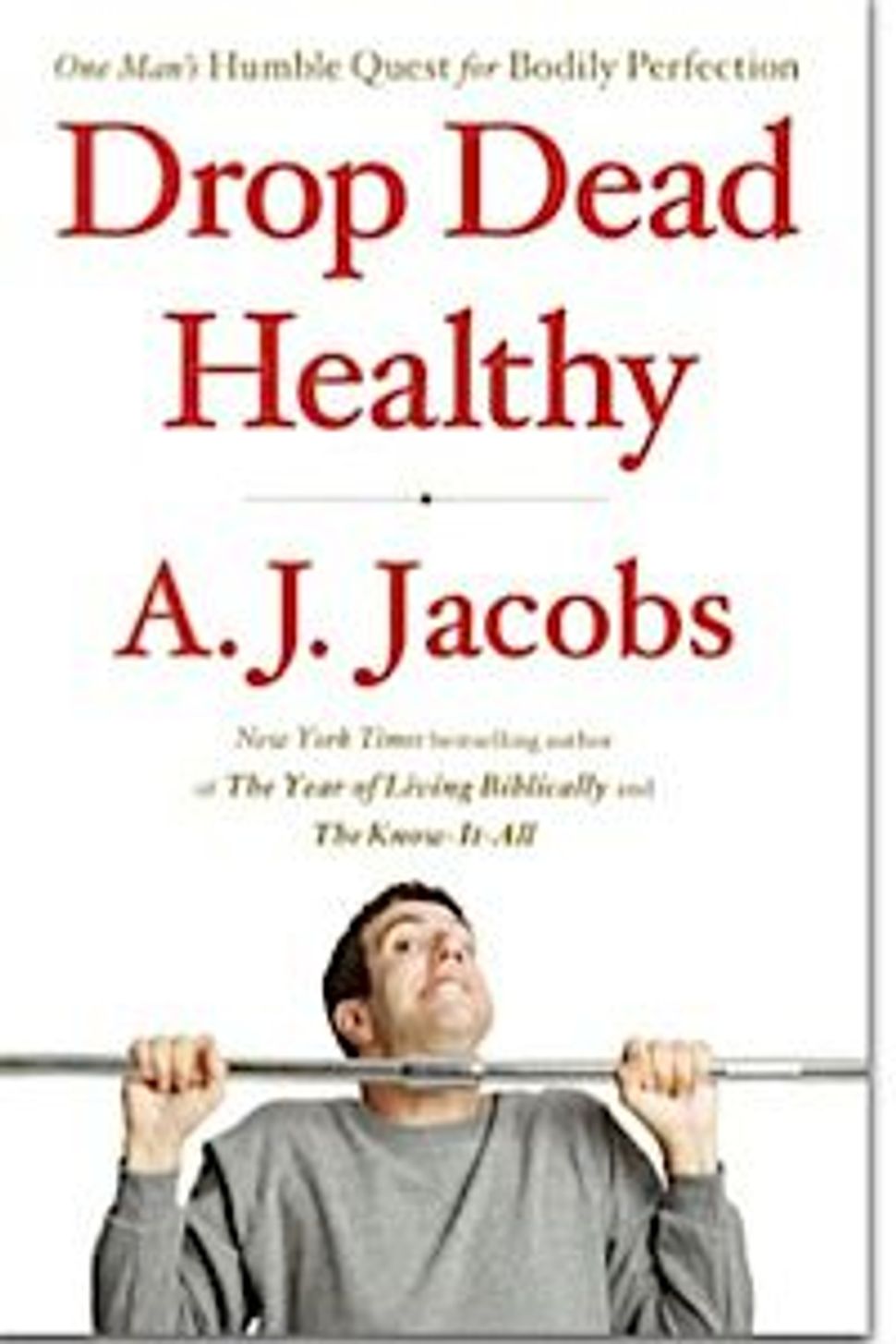 Esquire Editor at Large and experiential journalist A.J. Jacobs embarked on a quest to improve his mind by reading the entire Encyclopedia Britannica. That resulted in the publication of his first book, “The Know-It-All” in 2005. Three years later came “The Year of Living Biblically” chronicling his attempt to raise his spiritual consciousness by growing a wild beard, riding the subway dressed like Moses, and following all the laws of the Bible in their literal sense. Now the 44-year-old Manhattanite has recounted how he tried to achieve bodily perfection in “Drop Dead Healthy” — published earlier this month.

To be sure, a healthy diet and good eating habits would figure into Jacobs’ latest experiment. The question facing the author over the course of his two year investigation, however, was: What exactly is the healthiest diet and what are the healthiest eating habits? Jacobs discovered that some people follow healthy eating habits with a dedication that is akin to religious devotion, like the macrobiotic diet or the author’s Aunt Marti and her raw food regimen. One of the lesser-known habits that Jacobs uncovered has a name that even sounds a lot like a religion very familiar to readers of The Forward. It’s called “Chewdaism.”

Jacobs explains that Chewdaism is a kind of food mindfulness. He discovered that it is “a surprisingly passionate movement.” The central tenet of Chewdaism, is that chewing your food 100 times (Jacobs aimed for a more doable 50) before swallowing it makes you healthier. “They say chewing will cure stomachaches, improve energy, clear the mind, cut down on gas, and strengthen the bones,” Jacobs writes. “Those claims are overblown. But chewing does offer two advantages: You can wring more nutrition out of your food. And more important, chewing makes you thinner, as it forces you to eat more slowly.”

An Internet search for “Chewdaism” yields mainly references to “Drop Dead Healthy.” However, Jacobs told The Jew and the Carrot that he can’t take credit for the term. It’s presumably a portmanteau of “chewing” and “Judaism” (with the latter emphasizing the zeal with which some people adhere to it), but there appears to be no direct connection to Judaism or its food laws.

Jacobs said he first saw the term on a website, though he can’t remember which at this point. Perhaps it was hipchicksmacrobiotic.com, where you can watch a bizarre and borderline nauseating “Converting to Chew-daism” chewing tutorial video and read about a global chew-a-thon. Jacobs wrote in his book that he found pro-chewing websites that quoted Gandhi (“chew your drink and drink your food”), offer pro-chewing poems (“nature will castigate those who don’t masticate”), and sell CD’s that chime every minute that tell you it’s time to swallow.

It seems that historically, we have been “a nation of underchewers,” as Jacobs put it in a piece he wrote for Food and Wine magazine. Chewdaism is simply a new way to refer to an old idea called “Fletcherism” or “Fletcherizing” that was first promulgated more than a century ago by an American named Horace Fletcher. Fletcher, known as “The Great Masticator,” was influential in the world of food and health fads in the late 19th and early 20th centuries. A millionaire businessman and self-taught nutritionist, he spread his extreme chewing doctrine from 1895 until his death in 1919.

Chewdaism plays but one small part in Jacobs’ focus on stomach health and weight control (and the stomach, in turn, is only one of the many organs he focuses on in his book). Over the course of two years, he tried a wide range of diets and portion control techniques. Among them, he: did the Blue Print Cleanse; cut out sugar, but not coffee, alcohol or chocolate (at least not totally); considered both the Paleo (meat-only) diet and extreme calorie restriction, but opted instead for a vegetable-rich, modified Mediterranean diet consisting of a reasonable number of calories; tried eating only raw foods; learned to shop the perimeter of the grocery store; packed high-calorie snacks and treats in single-serving packages; and ate meals on his kids’ small plastic plates with a tiny shrimp fork that he puts down after each mouthful.

Now that Jacobs’ two-year-long quest for bodily perfection is over, he is still following some of things he learned about and tried out during that time. “I am still using small plates, still avoiding white foods like white flower, white sugar, and potatoes. I am still eating lots of protein for breakfast — egg whites and nuts — so that I don’t get hungry an hour later,” he told us. And in terms of extreme chewing, he’s a believer, but not a total convert. “Yes, I still do practice Chewdaism. But I’m more into reform Chewdaism,” he explained. “I found that 50 chews per mouthful was a bit absurd. It takes you a day and a half to eat a sandwich. But 12 to 15 chews is a good goal for me.”