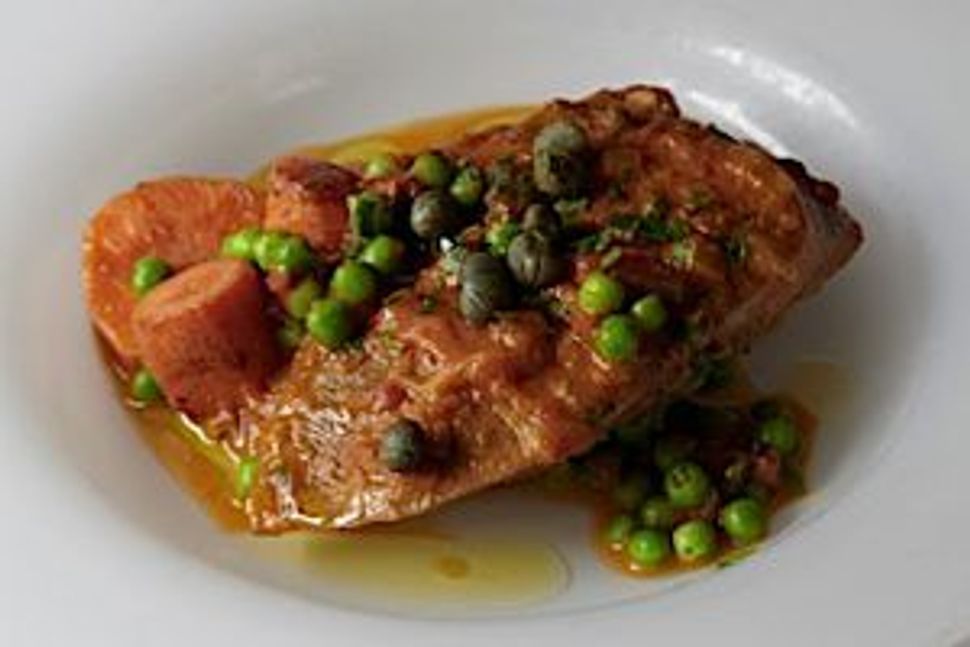 Tucked away on a side street in the Cobble Hill neighborhood of Brooklyn, La Vara is an artfully decorated, cozy restaurant specializing in Sephardic and Moorish cuisine. It’s the latest project by husband and wife team Alex Raij and Eder Montero, who own two Spanish restaurants in Manhattan.

Raij wanted to explore the Jewish element in Spanish food and took the name La Vara, meaning the branch, from a locally-published Ladino newspaper from the mid-20th century. The name does more than just signal the restaurant’s Sephardic cuisine, it points to Raij’s broader fascination with how niche communities draw on and influence the larger environments they inhabit. To craft the menu, she delved deep back into Spain’s rich history for inspiration, unearthing ancient Spanish-Judeo dishes that were transformed by the Inquisition.

A month after their opening, we chatted with Raij about her culinary inspirations for La Vara, why she chose to make it non-kosher and how the restaurant fits into the current Jewish restaurant scene.

Rachel Tomlinson: What inspired the move to create a restaurant focused on Jewish and Moorish cuisines?

Alex Raij: When I think of Spanish food I have always included the Jewish element. Growing up being Jewish and speaking Spanish it was a matter of course. I am interested in the dietary laws of a community and how it enriches a cuisine — not hinders it. I wanted to have a restaurant that directly reflected the legacies of both cuisines together — Spanish and Jewish. We thought: “Let’s show people that Spanish food has multiple different influences and legacies.”

Did you ever consider making La Vara a kosher restaurant?

No. I did not grow up in a kosher household so it was not as close to me. I was more interested in the way that Jewish and Moorish traditions were Christianized in Spain and how that is reflected in the food. During the Spanish Inquisition, all converted Jews and Moors were forced to eat pork — and now there are all of these Sabbath dishes that have pork in them. So, the cuisine was no longer kosher after the Spanish Inquisition and La Vara is concerned with this kind of authentic or traditional Spanish cuisine.

Our menu reflects this — our suckling pig, a traditional Spanish dish, is accompanied by rosewater and quince, which represents a contribution from the Moors. In Spain, ham and charcuterie are so commonplace in cooking they are almost considered it a condiment. If I were to do kosher, I would do it as a store, like a pantry, this way I would not be limited in the kitchen in terms of flavor or tradition.

Are there any dishes on the menu that have a particularly interesting Jewish story behind them?

All the cocidos or Sabbath dishes are unique in that every region of Spain has their own version but all are from the that tradition.

What research did you do before opening the restaurant?

I research dish by dish and this project is a collection of recipes that have been on my mind for a while. But generally I have a sneaking suspicion about the origin of a dish. I tend to make connections and then confirm them with research.

How does La Vara compare to your other restaurants, El Quinto Pino and Txikito?

El Quinto Pino is supposed to be the little bar that’s downstairs from your apartment — just like in Spain — a casual place to stop in and share tapas with friends. Txikito is a Basque showcase and it’s more formal. With La Vara I wanted to make it more focused — I wanted to show that tapas is approachable to eat and hopefully if people are sitting down and really taking the time to enjoy a meal they will appreciate it more. At La Vara all of the pieces of the menu not only go together but tell a story. La Vara is a place to explore a different palate — it’s a way to keep challenging the chefs and a way to remind people of the rich legacy of Spanish food.

You mentioned on Grub Street that you were interested in opening a neighborhood. What about the Cobble Hill neighborhood in particular drew you there?

We were drawn more towards small storefronts embedded in the neighborhood that are a part of the landscape. Cobble Hill made the most sense as the shops in the neighborhood have a Jewish and Moorish legacy… For us, we like to think that the restaurant would help to glue the neighborhood together by using so many ingredients from so many different local stores. We have so many great customers who view the restaurant as an extension of their homes. At La Vara I have the chance to get to know my customers one at a time — food is currency.

There seems to be a trend — especially in Brooklyn — towards more upscale Jewish restaurants. How does La Vara fit into this?

There is a trend for revival Ashkenazi cooking right now, like Mile End, etc, but La Vara is not this kind of restaurant. I think that the tastiest Jewish diet is the Sephardic diet — the ingredients are just much more vibrant. I do love schmaltz. I just wanted to do something a little different.

How exactly did you choose the name La Vara?

For us it was also a metaphor for branching out to Brooklyn. There’s a quote on the mural at Txikito dedicated by artist Mikel Urmeneta. It says: “When you leave your country your branches become your roots.” I think that as the child of immigrants, married to an immigrant telling this particular story in a place that so many immigrants call home has made the name even more relevant.