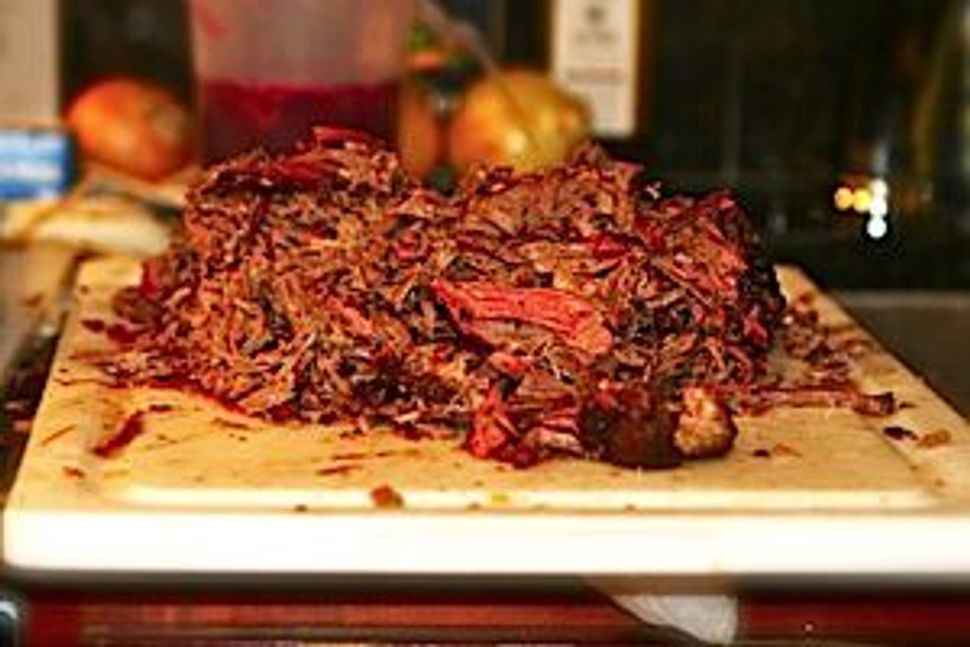 Image by Courtesy of Daniel Delaney

Brisket: It’s a staple on the Shabbat table and on the picnic tables of barbecue joints in the South. And self-proclaimed “Czar of Street Food,” Daniel Delaney is bringing it to New York City in a big way.

Delaney, 26, is the founder of Brisketlab, an “underground smoked meat guild” that will distribute pounds of barbecued brisket to its members this summer, with a side of booze and music. As a food writer and barbecue acolyte, Delaney was frustrated by the lack of craft barbecue experimentation in New York. So he bought an 18-foot-long smoker off a friend of his in Texas, hitched it to a trailer, and brought it back North with a truckload of indigenous Texas oak, what Delaney calls “the Rolls Royce of wood.”

“I’ve been cooking barbecue for a number of years, so I’m not completely green to it,” Delaney explained. “It’s easy to get to 95% good, but that last 5% is a marathon.” Batch by batch, Delaney plans on adjusting his technique to achieve brisket perfection. “With a lot of cookery, the final product is determined by the ingredients. But in brisket the ingredients are set: Beef, salt, pepper, and smoke. What’s interesting about brisket is it’s the minute changes and adjustments that make a real difference, like the positioning of your firewood and the length of your chimney.”

But smoking meat, like stewing up a batch of gumbo (or matzo ball soup), doesn’t work that well for a small group. You have to share. So Delaney dreamed up Brisketlab, in which brisket-lovers reserve meat by the pound and then pick it up at one of Delaney’s top-secret meat parties. Delaney’s smoking will take place in an undisclosed location. Within 48 hours of opening up Brisketlab’s registration, all 2,500 pounds of meat, at $25 a pound, had already been claimed.

“It took on a life of its own. I figured that we would have about 300 people, but we got 4,300 who pre-registered in eight days.” Delaney said. The guild’s members will get to sample the various incarnations of brisket at around ten parties, scattered around Brooklyn and Manhattan beginning this summer. Members can secure a portion of their meat allotment by the half-pound at any of the events, along with a slew of condiments. Delaney will collect feedback and lead discussions on brisket so everyone can “geek out about meat” together.

Why brisket? Delaney loves a challenge. “It’s the hardest meat to cook, and I think it’s the best protein for barbecue. Texas barbeque and brisket go together like Lucy and Ricky,” Delaney said. “And when it’s cooked properly, it’s an amazing piece of meat — fatty and flavorful. It’s getting it right that’s the hard part.”