Cooking Up a Revolution at Bar Kayma 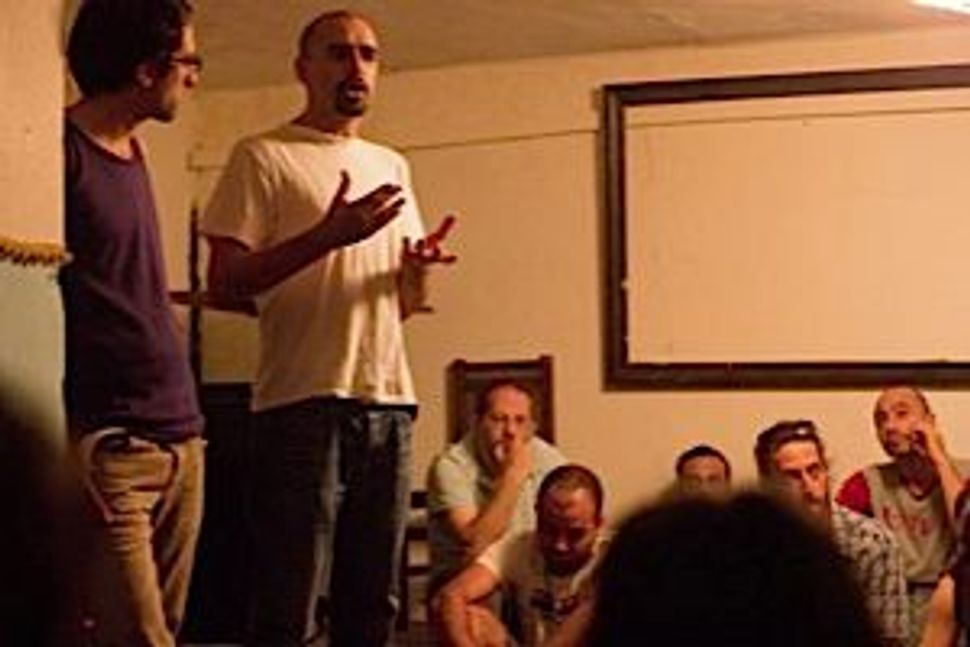 Image by Ofir Avigad talks with other members of the co-op.

After Israel’s tent protests of last summer dwindled, organizers Julian Feder and Yigal Rambam wondered how they could help the movement live on. They wanted to create a concept that would embody the ethos of the protests, which started in response to the high cost of living. So, in conjunction with entrepreneur Ofir Avigad they’ve launched Tel Aviv’s first cooperative bar and restaurant.

Although Bar Kayma, which means sustainable in Hebrew, was thought up by three people, everyone who purchases a share will own a bit of the restaurant and have a say in everything from how its run, to what food they will serve. The 80 people who have signed up in the three short weeks since the project started decided on making the spot vegan and committed to paying workers above average wages, both of which promote their sustainable ethos.

In addition to having the option to participate in the management of the restaurant, shareholders will also get all food and drink at the bar at cost (a significant discount), while regular customers will pay full price. Still, one of their biggest goals is that the space be affordable for everyone. They’re working on sourcing the best ingredients for the least amount of money, which is no small challenge.

Katherine Martinelli caught up with Avigad to talk about Bar Kayma, which is slated to open in June.

Katherine Martinelli: What is the concept behind Bar Kayma?

Ofir Avigad: We’re all about the new paradigm of living, everything included, so we’re trying to live sustainably in all ways. Instead of going to government and changing it from there, which is tiring, we want to do something that people will copy.

The first floor will be a very affordable bar and restaurant — that was very important to us, being affordable — and the second floor will be a gallery with documentaries, lectures, everything about consciousness awakening, protest, and non-violent action.

How does it work?

People pay 1000 shekels [about $260 USD] and you get the prices [of food and drinks] at cost, so minus whatever it costs to pay the rent, employees… So you’ll have a 5 or 6 shekel discount on beer, or even 10 compared to other places, prices vary. But generally speaking it’s about 15-30% cheaper.

How did Bar Kayma come about?

I guess we have been working for about six months now figuring out how to continue the protest movement starting with the tents last summer. We wanted something that was all about inspiration, not just a lack of being happy with what’s going on. So it was really important for us to create something that people would be proud of. We’ve been in business (well, pre-business, it’s not open yet) just three weeks and already we’ve got 80,000 shekels. That really puts hope into it.

Who is signing up?

I think that since the place hasn’t been open, all the people who have bought shares up until now are people who are fascinated with this kind of ideology. [They’re either] people who know us or heard about it via the net and are willing to come down here and meet us and pay 1000 shekels for something that will exist sometime in the future.

Anyone can join. You don’t have any duties whatsoever, you only have rights. Your only duty is paying 1000 shekels, after that you have rights — you can have initiatives, you can enjoy the place if you want to host an event. You can buy a share and never come to the place.

What is the management structure of Bar Kayma?

Then we have the secretarial people… They are officially what the capitalistic owner does in a normal business. The manager of the restaurant is technically below them and has to answer to them every day.

Where will you source your products?

We want everything to be the best of the best. My housemate built a website for an organic delivery service that aggregates a lot of local growers so we’re connected with that…we’re trying to have things as best as we can but because food can vary you can have more expensive costs. So we are first aiming to have the place sustainable in terms of economy, second in terms of fair wages for our employees, and then sustainability of ecology.

What kind of food will you serve? We’re going to serve pastas, salads, sandwiches — you know, the usual cafe fare. Nothing too fancy.

Will the restaurant be kosher?

No, because we’re going to open Saturdays. I think Shabbat is a very good time to cook revolutions. You’re supposed to be resting from your daily tasks and that’s the time that you think about freedom and ascending.

Where will it be located?

In Florentine, it’s the neighborhood where all the young people live. It used to be an Indian restaurant with a guest house, three stories, and we’re renting the whole place, it’s going to be huge. It’s going to be a monster.

Cooking Up a Revolution at Bar Kayma