Pickling Across the Pond 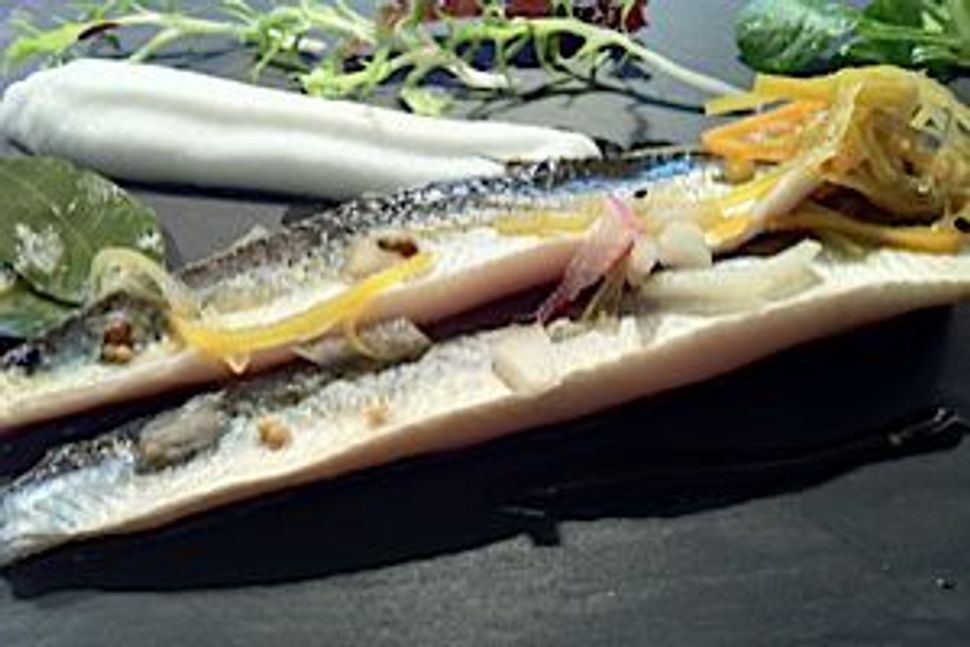 Courtesy of The Minnis Image by Pickled herring at The Minnis

In America, the traditional culinary practice of pickling and preserving foods has enjoyed a recent revival in restaurants and home kitchens alike. Now in England, Chef Jason Freedman at The Minnis — a farm (and sea) to table restaurant about an hour-and-a-half east of London in Birchington — is helping to re-introduce the joys of fermentation across the pond.

A 27-year veteran of professional kitchens, Freedman only recently started experimenting with fermenting and pickling foods. Luckily for diners, he quickly “caught the bug,” turning The Minnis’ menu into a playground of preservation — think: herring pickled with bay leaves and nutmeg, or cold smoked salmon served with horseradish aioli. Chef Freedman took some time to speak with The Jew & The Carrot about why pickles piqued his interest, his brand new smoker, and how he gets his regular fix of Jewish cooking.

For more on pickles and preserves, check out Leah Koenig’s article on Jewish pickling traditions from around the globe.

Leah Koenig: How does pickling and preserving fit into your cooking at your restaurant?

Jason Freedman Where to start? We have quite long winters here, so pickling and preserving food is a natural fit. I also always like to try something new, and am interested in learning new things by going back to old traditions. Where the restaurant is situated there’s an old Roman fort, so I started looking into Roman techniques of curing, brining, pickling, and smoking food. We started off with making salt beef and corned beef, but the British version, not the American version.

You break up the cured salt beef — what would end up sliced and on a sandwich in America — then mix it with beef drippings and set it into a mold. So it turns into something of a pâté. We serve it here with bread, and our home cured pickles and chutneys.

What are some other examples of pickles and preserves you make, and how do you serve them at the restaurant?

We make lots of pickled vegetables — we do pickled red and white cabbages, onions, and beet root. We do a Japanese style sweet pickle made with vinegar, sake, Schezuan pepper, and sushi ginger, so it turns slightly pink. We’ve moved into doing a lot of pickled fish too. I’m a big fan of pickled herring, and here we sweet pickle them with bay leaves, nutmeg and mace.

We generally try to incorporate them into our main dishes. Right now I offer a starter that’s a latke made from swede [rutabaga] and pear, which we serve with our own pickled herring, smoked salmon, which we make as well, and horseradish. We also offer a platter of our home cured produce and charcuterie, which we serve with bread and chutney. And on our bar menu we serve the pickled herrings on their own with potato salad.

How did you first get interested in preserving foods?

I’m interested in all aspects of food, but until recently, I had only dabbled in pickling — never explored it properly. But once I got started I got a bug for it. It’s so simple, and you end up taking a raw ingredient and changing its form entirely. We thought we’d make a lot of mistakes and have a lot of disasters along the way, but it was actually quite natural. The only real mistake I had was, I was curing salami in a vacuum bag and got the idea of putting in red wine. I thought it could be a pure mistake, but it came out quite good.

Did your Jewish background influence your interest in pickling?

I had a fairly good Jewish upbringing until I was 6 or 7, but something happened along the way and we stopped going to synagogue. Much of my family in London is still very Jewish, but here it’s such a small community, and I haven’t really explored Judaism much aside from reading about it. I do have a friend who comes down from London pretty regularly and he always brings me chopped liver, latkes, bagels and things like that. So I still eat lots of Jewish food, and some traces of Jewish food show up on our menu — like the salt beef, latkes, and smoked salmon.

Any new pickling or preserving projects on the horizon?

We’re hoping to explore it more this year, though we’re not quite sure how yet. We just bought a smoker and want to try smoking pickled foods — so pickling them first in brine and then following that up with a smoke. I think we’ll predominately try this with fish, but I like to push boundaries so maybe we’ll try it with vegetables too. Who knows, maybe that will be our first pickling disaster!

If people want to get started pickling, do you have any recommendations for books they should read?

My favorite book on the subject is Charcuterie: The Craft of Salting, Smoking and Curing by Michael Ruhlman and Brian Polcyn.

Pickling Across the Pond