A Jewish Sandwich Grows at the Carnegie Deli 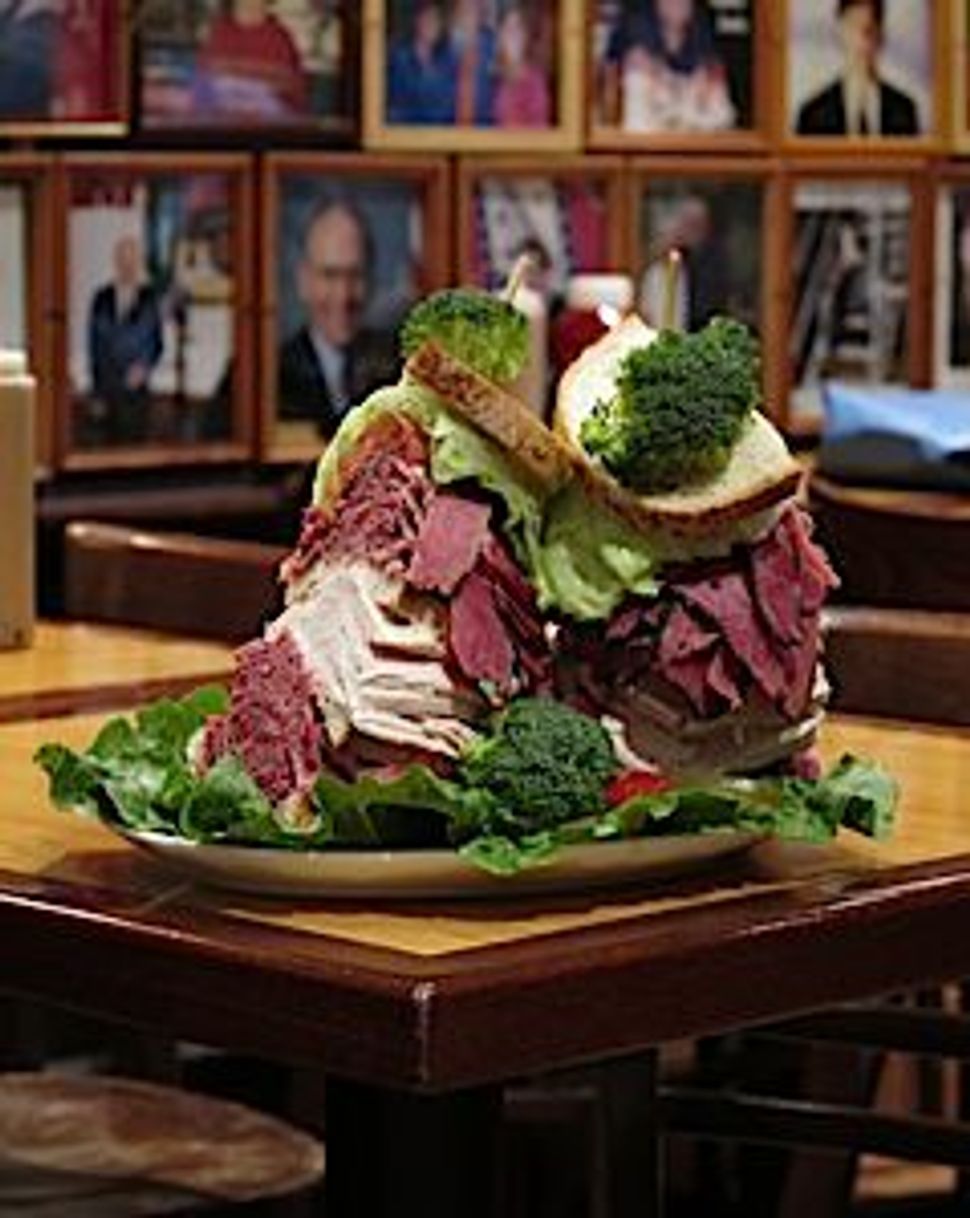 Image by Courtesy of the Carnegie Deli

A successful off-Broadway show is one thing, but if you really want to know whether you’ve made it in the big city, check the menu at Carnegie Deli.

Last week, the Carnegie Deli unveiled its massive “A Jew Grows in Brooklyn Sandwich” (shown) in honor of Jake Ehrenreich’s off-Broadway show of the same name, about growing up in 1960s East Flatbush, the child of Holocaust survivors.

The mostly comedic show — which includes personal stories and music — is being immortalized with a sandwich made of corned beef, pastrami and turkey with lettuce and Russian dressing on rye. It’s topped with a broccoli flower (the “tree”).

The sandwich is so big that when we spoke to Ehrenreich, four days after it was unveiled, he was still eating pieces of it. Two sandwiches had managed to feed his family over the weekend.

“When I saw it, I said no way can one person eat that. But at least I knew better than to use a knife and fork,” Ehrenriech said.

Ehrenreich, who used to be the band leader at the Rainbow Room, said he would often stop off at the Carnegie Deli on his way home to Monroe, New York — dressed in a tux — and pick up a pastrami sandwich. “I’d drive with one hand and eat the sandwich with the other,” he said. “The mustard would end up all over my tuxedo. But what was I going to do — wait until I got home to eat it?”

Brooklyn’s Borough President Marty Markowitz was also on hand last Thursday to declare May 17 “A Jew Grows in Brooklyn” Day in honor of the show and the sandwich.

Recently, the Theater District-area deli named a lox-based sandwich — the “Gold E. Lox” — for comedienne Judy Gold who was performing in her own one-woman-show at the time. And in March, Carnegie created a Tim Tebow-inspired sandwich called the “Jetbow” to welcome the all-American athlete to the New York Jets. The sandwich was made of corned beef, pastrami, roast beef, American cheese, lettuce and tomato on white bread (in a nod to Tebow’s all-American roots — usually sandwiches are on rye).

The “Jew Grows in Brooklyn” sandwich follows in the great Jewish tradition of funny sandwich names. Brooklyn appetizing shop Shelsky’s has the Brooklyn Transplant (fatty kippered salmon, apple horseradish, cream cheese, pickled herring salad, on pumpernickel or rye), Russ & Daughter’s has the Heebster (whitefish and baked salmon salad with horseradish dill cream cheese on a bagel) and Carnegie Deli has the “50 ways to love your liver” (with chopped liver, naturally).

A Jewish Sandwich Grows at the Carnegie Deli