Debating the Future of Kosher Food in London 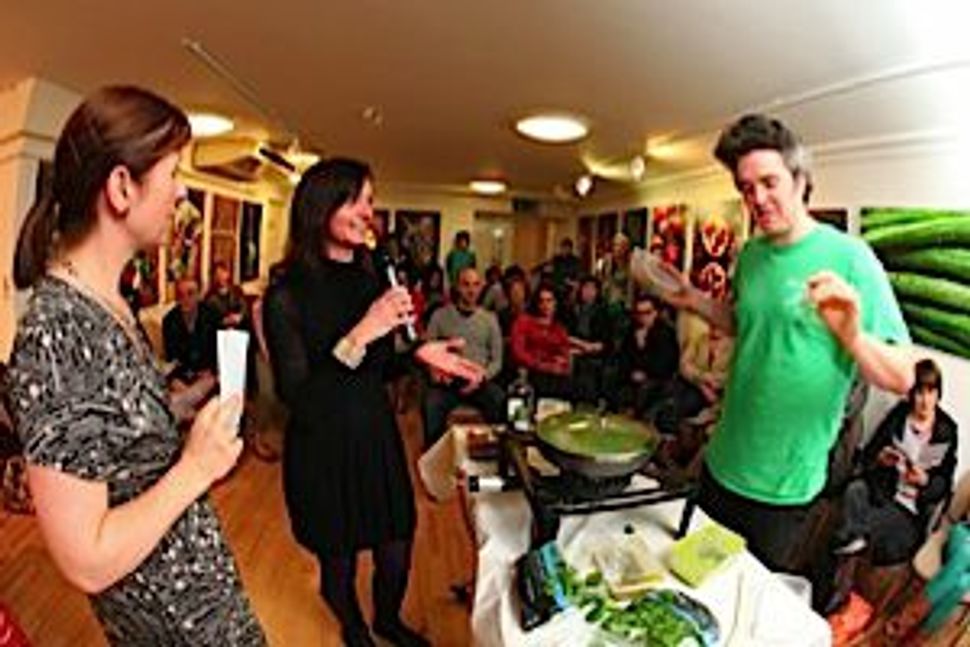 Fressing and kibbitzing. Eating and talking. It’s what we Jews do so well, which is why on an unseasonably cold Sunday, the beautiful Ivy House, HQ of the London Jewish Cultural Centre, was heaving with over 500 people for this year’s Gefiltefest.

Setup in 2010, Gefiltefest — a British celebration of all things food and Jewish related — is now in its third year. Organized by the perennially cheerful Michael Leventhal, it is the ultimate Jewish food conference across the pond. Warmed by fragrant samosas topped with chili and yogurt made by a collective of North African women who call themselves Spice Caravan, people gathered for a mix of talks, panel debates and stalls more or less all focusing on the wonder that is food. Topics ranged from the silly — making edible portraits for kids — to the more serious like the panel debate I hosted on the future of kosher food.

The other panelists were all kosher restaurateurs, of one shade or another. Kenny Arfin runs Bevis Marks The Restaurant, one of London’s smarter kosher restaurants; Elliot Hornblass is one of the backers of The Deli West One, a New York deli style restaurant and Amy Beilin is the force of nature behind Kosher Roast, London’s first kosher pop-up (as far as I’m aware).

The first question I posed was whether it matters if there is a future for kosher food. With the Jewish population in the UK at under 300,000 realistically how many people are religious enough to care? And even if they do care, are there sufficient numbers to make it commercially viable.

The conclusion was that there is a future because even if the market is small, there are enough people who care passionately to keep it going. Where the panel had differing views was on the cause and cure of the current stasis in the market.

There was consensus that suppliers and religious kosher authorities don’t help the situation. One example given was chickens. There;s only one major supplier in the UK for kosher chickens, meaning limited price competition. Similarly, there are only a handful of kosher certifying authorities and they err towards a conservative approach.

These are not uncommon complaints from kosher restaurateurs, but one area of difference among the panel was the role of the customer. Kenny felt that the customer invariably is conservative and expects traditional Ashkenazi fare when they eat out, reflecting views of what “Jewish” food is. At an event he recently catered, he tried to serve pareve cheese on top of hamburgers, but these were widely rejected.

Amy took a different line, she felt that her experience showed the kosher customer wants more innovation, that there is an expectation of good food, clever marketing and a decent drinks menu. Surly waiters and meat with the consistency of shoe leather — two features of sorely missed Blooms restaurant — are a thing of the past. If she’s right the kosher consumer is catching up with their secular cousins. At long bleeding last.

If questions from the floor are anything to go by, Amy’s view, supported by Elliot are a fair reflection the London Jewish community. Kosher keeping Jews are clamoring for their food to catch up with their values. It’s no longer good enough for food to be kosher — provenance, appearance and flavor have entered the kosher lexicon.

It will be interesting to see whether the market changes over the next year and by Gefiltefest 2013 we are talking about how the public has at long last got what it wants.

Debating the Future of Kosher Food in London