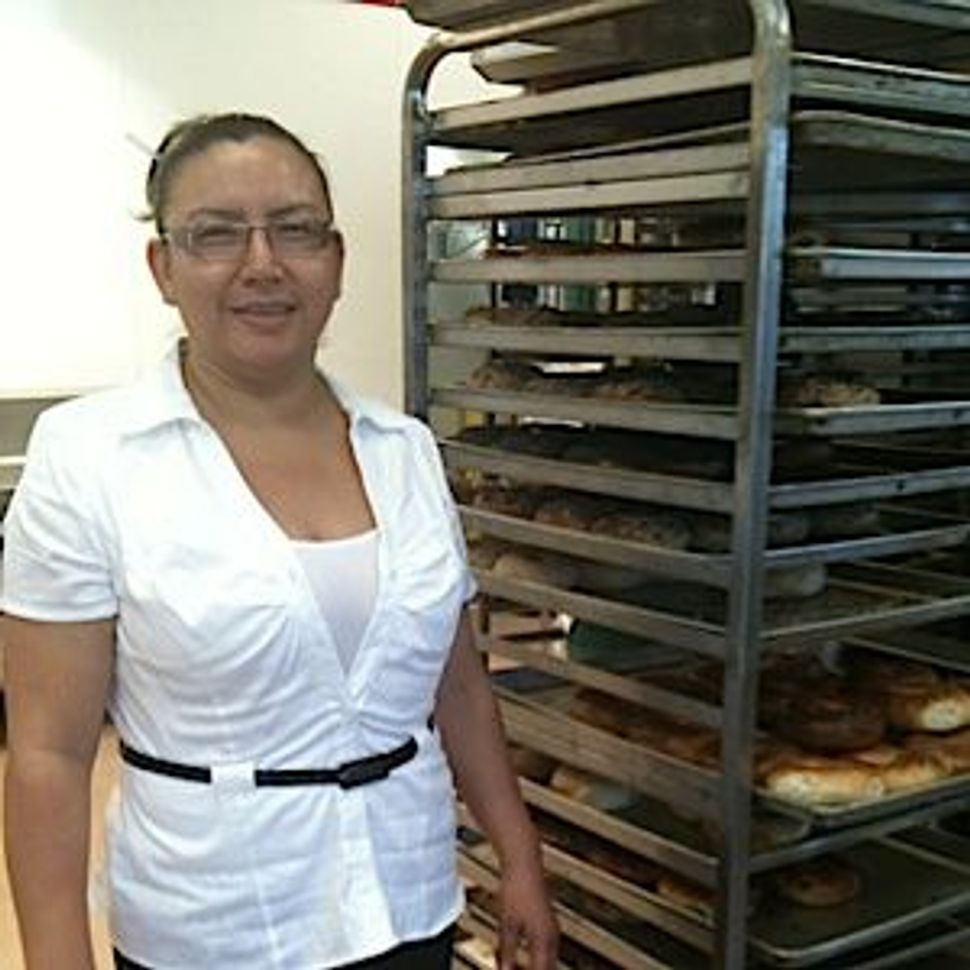 “I’ve been living in East Palo Alto for 24 years, and this is the first bagel shop I’ve ever seen here,” said Rafael Avila, the baker at Izzy’s Brooklyn Bagels. Undeterred, Avila was busy baking batches of bagels on June 1, the grand opening of Izzy’s new location in this Bay Area city with a mainly Latino, African-American and Pacific Islander population, and virtually no Jewish residents.

After being in business in nearby Palo Alto for 16 years, Izzy’s Israeli-born owner, Israel Rind, wanted to expand operations. While past attempts to establish viable outlets in Sunnyvale and San Francisco (locations with relatively large Jewish populations) were short-lived, Rind is hoping that this unusual move will pay off.

People come from all over the Bay Area to Palo Alto to buy Izzy’s bagels, which satisfy even highly discriminating ex-New Yorkers — myself included. The Bay Area in general is a relative desert when it comes to good bagels, and Izzy’s has cornered the market for kosher ones. Customers also appreciate the store’s appetizing treats like smoked salmon and whitefish salads, Middle Eastern fare like hummus and tabouleh, and kosher pizza and pastries.

Manager Diana Arzate, who has worked for Rind for the past 11 years and has lived in East Palo Alto even longer, thinks this new move is a smart one. “I think we’ll have a good response from the East Palo Alto locals,” she told The Jew and the Carrot as she sat down to take a break from opening day work.

She admits that the Palo Alto regulars are unlikely to venture the 10-minute drive across Highway 101 to East Palo Alto. “They’re afraid,” she said in reference to East Palo Alto’s rough reputation (it was the homicide capital of the country back in the 1990’s, but crime has dropped considerably since then). Arzate is hopeful that loyal kosher clients from San Francisco and Berkeley will take advantage of the easy access off the highway to this location, and will soon favor it over the Palo Alto one. She’s also betting that customers will emerge from among the local community.

Some such customers were in the shop on opening day. A few found out about Izzy’s arrival in the neighborhood from the bagel-filled gift baskets Arzate had dropped off at places like the local senior center, police station, library and YMCA. Others saw the “grand opening” balloons and banners and “free bagels” sign outside and ventured in. Still others came for tacos at the popular Mexican restaurant next door and came to check out what had opened in the 2,000 square foot space that used to be a mini-market.

Sisters Mary and Rachel Latu, both students, came it to grab sundried tomato bagels with plain cream cheese to go. “I hope it lasts here,” Mary remarked. “It’s good to have this different option instead of the unhealthy fast food that is generally available here.”

To fill the 30 seats at bistro tables inside the store and on the outside patio, Izzy’s is thinking creatively in terms of its menu. While it will basically sell the same food as its original location, it will also tweak the menu to the local palate. “We’ve already come up with a Mexican-style hummus,” Arzate shared. “It’s going to be made from ground pinto beans and chipotle.” Also in the works is a jalapeno bagel with more of a bite. While Izzy’s has been selling jalapeno bagels for a while already, this new variety will kick the heat up a notch with a crushed pepper topping.

It’s clear that if Izzy’s is to survive in East Palo Alto, it’s going to have to spice it up a bit.