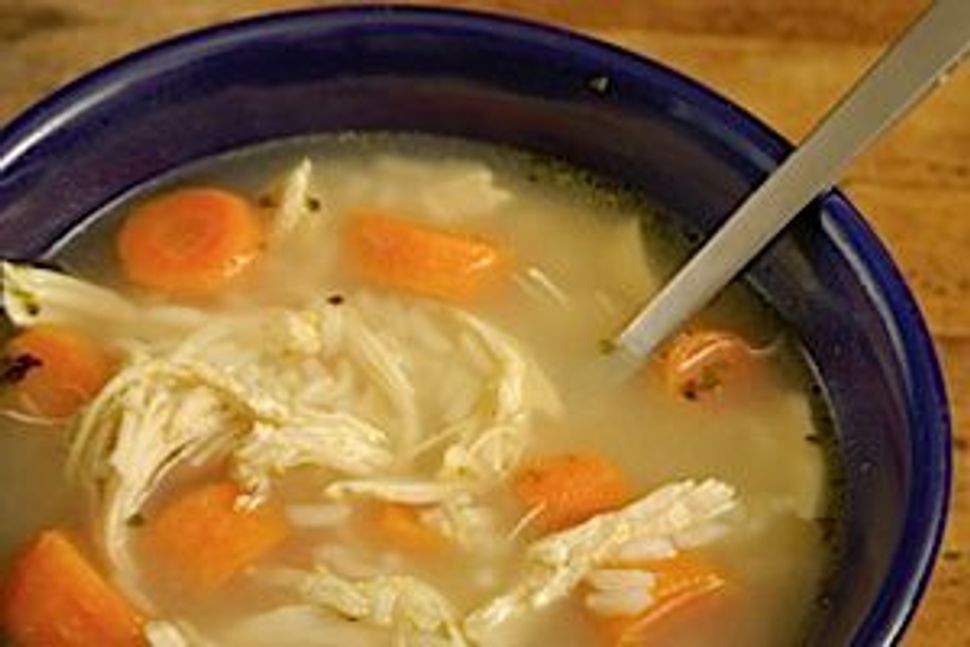 Being from solid Ashkenazi stock, Friday night dinners invariably meant several ways with chicken: chopped, boiled and roasted. Although it was the least glamorous — the boiled chicken — that most excited me.

Chicken soup is a much loved dish and I’m always partial to a bowl or two, especially with my mother’s kneidlach. But it was the by-product that got my taste buds going.

I shouldn’t call it the by-product because the chicken is the main event, everyone just forgets about it and goes straight to the diluted version — what is soup if not a watery take on a solid? Chicken soup is genius in so many ways, but particularly because you can remove the primary ingredient and the soup is in no way diminished and the chicken tastes delicious.

I realized this curious fact early on in life and it led to a pleasurable pre-Shabbat ritual. Returning home from school I would sneak into the kitchen and sidle over to the large glass rectangular dish that contained the chicken. It would sit there looking somewhat wan. The skin had probably fallen off in the pot and other than boiling water and some aromatics, there was nothing to give it a hint of color. But I could readily overlook the aesthetic shortcomings. I was focused on a sandwich and no good sandwich will ever get mistaken for an oil painting.

Ideally the chicken would be warm but not hot and sitting in some broth that is mostly liquid, but at points is quivering into jelly. I would take aim at the breast, barely having to exert any pressure as the meat gladly parted company with the carcass.

Once enough chicken had been liberated I’d root around the bread bin to find a fresh sesame-seed bagel. Still with the merest hint of warmth from the bakers oven, they were nutty from the sesame, had a hint of sweet and salt and the all important features of a bagel, a chewy crust, but a forgiving center.

Split in two I would now be at a crossroads. The only one in this process. Either I would go down the purist route or I’d pimp my sandwich a bit. The purist route would be to pile the chicken onto the bagel, add a little squeeze of ketchup and generous dousing of chicken soup to ensure continued moistness, taking full advantage of a bagel’s rigidity.

The more outre version was to add half of a thinly sliced avocado, a dab of mayo and a couple of spritzes of Tabasco to the purist.

At this stage I was ready to retire to a quiet corner of the kitchen to contemplate the Shabbat meal that was just around the corner and ponder a question that had been vexing me for years: why was I never as hungry as everyone else when the chicken soup, chopped liver, roast chicken, roast potatoes and crumble made their post-Kiddush procession onto the table? I’m still wondering.

1) Take a fresh bagel slice it. Ideally it is still a bit warm from the baker. If you don’t have anything that fresh, then put it in the oven to warm it. Don’t toast it. This is not a sandwich that requires crunch or crumbs.

2) Peel the breast away from the carcass. You can use knife and fork if you insist, but I prefer pulling it away with my fingers as it comes away in nice clumps. Remove any skin that is lingering on he chicken.

3) Take one bagel half and compose as you see fit. I tend to put ketchup first, then chicken, then avocado, mayo and Tabasco.

4) Pour the broth over the other half of the bagel so that the bread soaks up the liquid and close the sandwich.

5) Eat in quiet contemplation awaiting the arrival of Shabbat and your dinner.