Jews and Coffee — Talk Amongst Yourselves 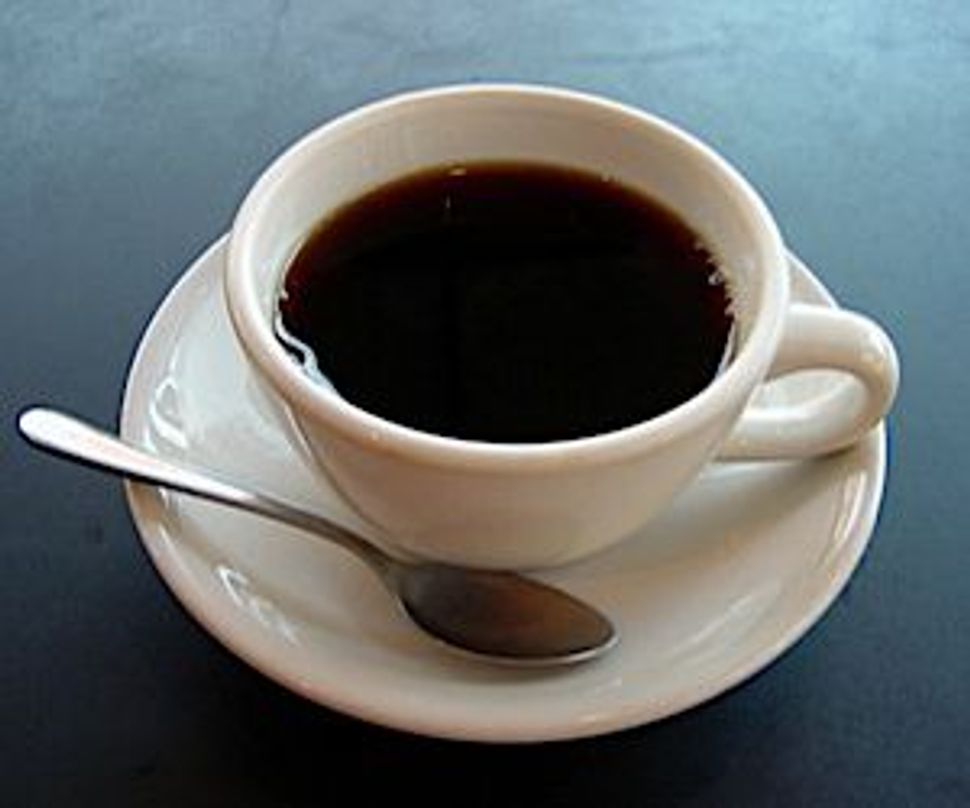 Coffee can help us survive insomnia, late-night hours at the office, and wicked hangovers, but can the bitter brew really tell us about our past? According to Robert Liberles in his most recent book, “Jews Welcomes Coffee,” there’s a lot to be discovered through the bean — including insights into German Jewish history.

When coffee arrived in Europe in mid to late 16th century, wine and beer were the beverages of choice (mid-afternoon beer break, anyone?). Bitter and packing doses of caffeine, coffee was seen as an exotic and suspect drink, that was accepted by some and feared by others.

More than in any other European nation, coffee faced significant backlash in Germany where it was seen as a potentially destructive beverage for a nation with deeply entrenched beer industry and “liquid nationalism.” Frederick the Great, believed coffee’s popularity at beer’s expense would damage the national character. “My people must drink beer,” he said. “The King does not believe that coffee drinking soldiers can be depended on to endure hardship.”

Coffee’s popularity also threatened the German economy. It’s diverted money away from the domestic network of beer production and redirected it towards the importation of foreign coffee beans.

While German Christians were battling over coffee, German Jews adopted coffee with relatively little resistance, perhaps reflecting their own eagerness to be accepted by a German society that had strong anti-Semitic veins. But coffee, like other modern items of the time, presented challenges for rabbis, Liberles points out. They struggled with how the new popular beverage would fit into Jewish custom and law: What prayers should Jews say over coffee? Could the new drink be prepared on Shabbat and could Jews drink from a gentile coffeehouse, were all topics of conversation.

At the same time, Jews were becoming involved in the trade of coffee. In the 18th century a petition against Frankfurt Jews’ involvement in the coffee trade surfaced. The petition, Liberles explains, reflected the fears among Germans that Jews were transition from money-lending to commerce. The petition fed on old anti-Semetic ideas of Jews as inherently deceptive and modern concerns that Jews’ economic role was dramatically increasing. There was also a fear that Jewish merchants would taint the new drink with addatives that would harm Christian consumers.

While Liberles’ discussion of the petition reveals the crux of concerns and suspicions towards German Jews at the time, it is unclear why he chose coffee for his focus, especially when Jewish tea and sugar merchants faced the same challenges. The connections between German Jews and coffee seem forced at times in the book.

However, Liberles is careful to never to hyper-inflate the role of coffee in Jewish or European history. “Coffee itself hardly caused fundamental changes in social or political structures,” he writes. Rather the responses to coffee, “reflected the character of each society and the broader dynamics of change at that time.”

While a reader may need a strong cup of coffee or a shot of espresso for some of his denser sections, Liberles teases out unique insights into the financial, religious, and social structure of the Jewish community of early modern Germany through their ties to coffee. But, the greatest benefit of reading his book is realizing how a single edible can be treated as a lens for historical research, proving: “Ideas alone do not change history,” sometimes food does.

Jews and Coffee — Talk Amongst Yourselves