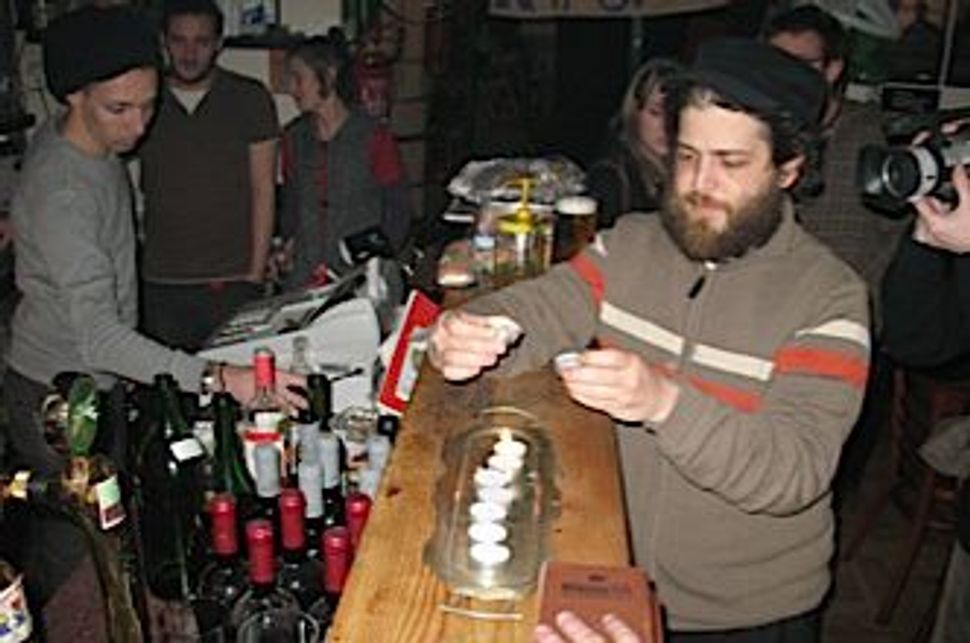 Lighting a makeshift menorah set up on the bar during Hanukkah. Image by Ruth Ellen Gruber

Visitors to Budapest this summer will be out of luck if they hope to soak up Jewish cool at Siraly, the funky café in the heart of the old inner city Jewish quarter that became famous as the flagship of the city’s alternative Jewish youth scene.

Local authorities in the city’s Sixth District closed Siraly in May saying its three-floor building on Kiraly Street was unsafe. Since opening in 2006, Siraly had operated as a semi-squat, and the closure order came after years of wrangling with district and city authorities over its legal status. Siraly’s co-founder and program director Adam Schoenberger, the 32-year-old son of a rabbi, believes political motives were behind Siraly’s closure.

“Not necessarily anti-Semitism,” he told me as we sipped lemonade at another Jewish quarter cafe, around the corner. “But maybe part of a campaign by conservatives against liberal-leaning youth in general.”

With its scarred wooden tables, tall arched windows and basement performance space, Siraly was one of a growing crop of cafes and pubs in the rundown Jewish quarter that opened over the past decade and became popular hangouts for young Jews.

What set it apart from other venues, such as Szoda and Szimpla, was its aim to be a culture center rather than simply a Jewish-friendly hang-out. Co-managed by Marom, the Masorti (Conservative) youth organization, it had a big mezuzah on its door and ran events ranging from lectures and exhibits to Purim parties and community Seders. It also hosted numerous klezmer/hip-hop/fusion concerts. During Hanukkah, business halted each evening to chant the blessings and light a menorah set up on the bar.

The partnership between Marom and Siraly also led to the founding of annual Hanukkah festival, Quarter6Quarter7, and a small spin-off Passover festival that started this year. Each summer they run Bankito, a youth arts and music festival (sometimes referred to as “Jewstock”) held at a lake near Budapest.

The community from Siraly sparked other Jewish events and groups including an informal and non-traditional congregation, Dor Hadash, which has held Shabbat services at Budapest’s Moishe House, a few blocks down the street, since 2009.

Schoenberger told me he’s putting all his energy into this summer’s edition of Bankito — which, its website says, almost didn’t materialize because of funding shortfalls. This year’s festival runs July 20-22 with a line-up including local bands such as Sena Live Band, Mary Popkids, The Qualitons, Fixi4, Sickratman, Egy Kiss Erzsi Zene, Plastic Heaven, and Puszi.

After that, he said he will look for an investor — and a location — to open a new incarnation of Siraly.

Mircea Cernov, who heads Haver, a non-profit that teaches school children about Judaism, said that might not be easy without a clear focus.