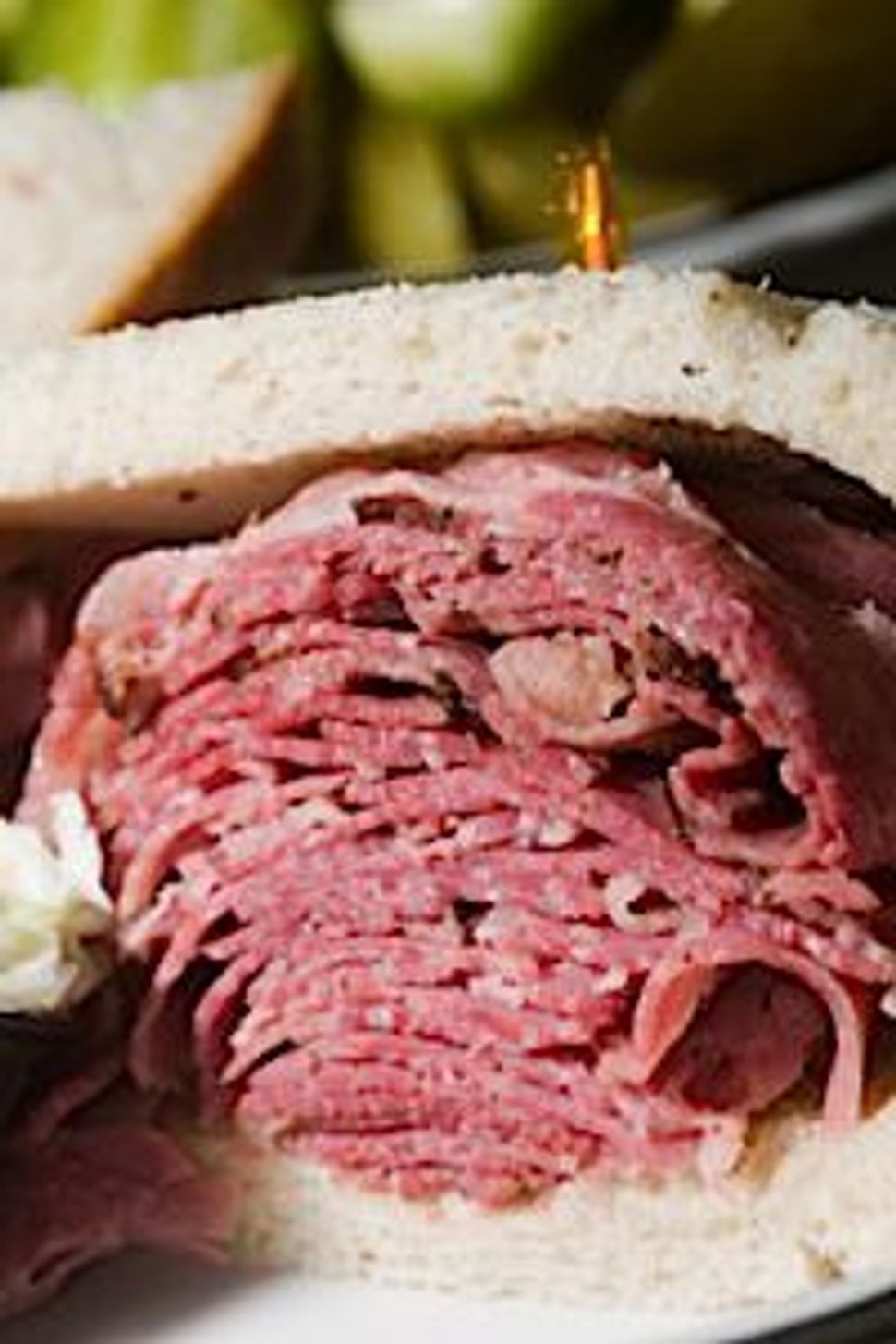 When Haaretz’s food and wine critic, the late Daniel Rogov, moved from Paris to Tel Aviv in the late 1970s, he discovered a cornucopia of Jewish foods from all over the world, stemming from the manifold cultures from which Jews had immigrated. What he missed was one of his favorite foods from his childhood in Brooklyn: a pastrami sandwich on rye.

Indeed, what is arguably the quintessential American Jewish dish has never played a major role in any other Jewish cuisine in the world. There is something irreducibly American about the deli sandwich, which bespeaks the unique history of American Jews.

Much of the Jewish deli sandwich’s popularity in America is tied to the evolution of the sandwich itself, which exploded in popularity after the First World War. Even before the advent of the mechanical bread slicer in Iowa in 1928, the sandwich (originally invented by Rabbi Hillel the Elder, as we commemorate each year during the Passover seder), became one of the most popular of all American foods, with more than 5,000 sandwich shops in New York by the mid 1920s. In a city defined by its manic energy, the sandwich became the perfect fuel for people on the go.

The kosher deli became no less than a secular alternative to the synagogue. The corner kosher deli, which served as the Jewish equivalent of the Irish pub or black barbershop, served a crucial social function; at the height of the Great Depression there were more than 1,500 kosher delis in New York, and after the Second World War, delis began popping up wherever Jews had relocated, from Miami Beach to Los Angeles.

Delis enabled Jews to bridge their Jewish and American identities, and to congratulate themselves on their rising social and economic position in American society. In legendary “kosher style” eateries like Reuben’s and Lindy’s, Jews devoured skyscraper-high sandwiches named after the stars of the day. The very atmosphere of glamour and celebrity enabled Jews to flatter themselves on their arrival in mainstream American society. The overstuffed deli sandwich symbolized no less than the attainment of the American Dream.

In other countries, the deli sandwich never made it so big. Not that Europeans, for example, were unfamiliar with smoked and pickled meat. In Great Britain, tinned corned beef was served to generations of soldiers from the Boer War to the end of World War II. The French and Italian had their charcuteries and salumerie, respectively, where gourmet sausages and cured meat products (mostly made from pork) were retailed. And every town in Germany, it seemed, was known for the particular kind of sausage that it produced.

Delis did occasionally migrate outside of the United States. Indeed, a handful of Jewish delis prospered for decades in Europe; these included Bloom’s in the leafy London suburb of Golders Green and Jo Goldenberg’s on the lively Rue des Rosiers in Paris, But for the most part, Europeans never went in for the kind of in-your-face, conspicuous consumption that scarfing down American-style deli sandwiches entailed. European cuisines typically featured small portions, refined atmospheres, elegant presentations, leisurely meals —the opposite of dining in a loud, raucous environment in which people ate with their hands, talked with their mouths full and rushed through their repast. This uncouth behavior was associated with people who were marginalized, low-class, immigrant.

Nor, as Rogov found, did the deli sandwich tend to appeal to Israelis. As he speculated not long before his death last fall, the pre-eminent critic attributed this palpable absence to a number of factors dating back to the country’s formation, including the desert nation’s prevailing taste for simpler and lighter foods, the socialist predisposition to spend as little time and money on food as practicable, the substitution of turkey and chicken breasts for beef in making pastrami, and the use (which he deplored) of cows rather than steer for meat.

New delis continue to open in Europe and Israel, from the glatt kosher Reuben’s in London (which serves steak and lamb chops along with its salt beef sandwiches) to Ruben’s in Tel Aviv (which carries a wide selection of draft beers). But the New York Jewish deli was never just about the food. It fed the soul as much as the stomach. It nourished a faith in America as a land where Jews could finally be free to be both Jewish and American at the same time. It nurtured a sense of confidence and belonging that was as filling as the most pastrami-packed sandwich could be.

Ted Merwin, who teaches at Dickinson College (Carlisle, Pa), is author of the forthcoming book, “Pastrami on Rye: An Overstuffed History of the Jewish Deli.”