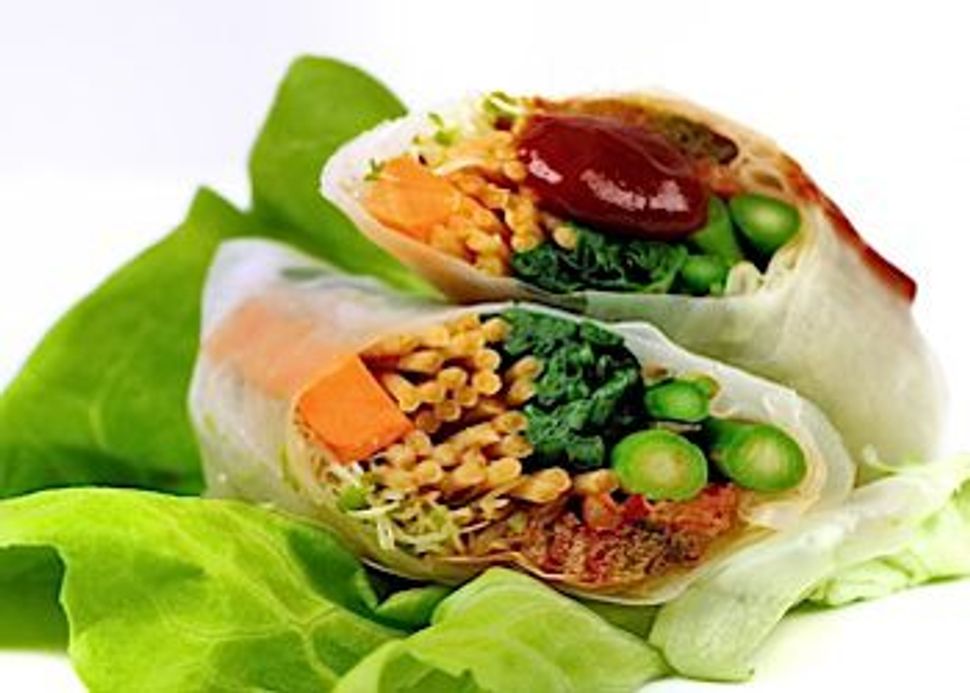 Image by Courtesy of Beyond Sushi

After his limelight moment alongside Gordon Ramsay as a season-10 Hell’s Kitchen finalist, and the nonstop demands of his family’s successful kosher-catering company, Guy Vaknin needed a change.

Vegetarian sushi was one of his biggest successes in “modernizing” his family’s business, Esprit Events. So after ditching his executive-chef post and doing some market research with samplings at New York City yoga studios and gyms, Vaknin opened Beyond Sushi this month in a tiny former wig shop in downtown Manhattan.

Beyond is the neighborhood’s first eatery dedicated to fishless maki rolls, along with veggie rice-paper wraps, and salads. But Vaknin, a “recently converted” vegetarian who was “a big meat eater” until two months ago, is careful to note that he’s not aiming to ape traditional sushi. “I had a bunch of Japanese reporters get really mad at me about the name,” he says. “But that’s why I called it ‘Beyond’. It’s an alternative.” And while the rolls definitely won’t fool devotees of traditional sushi, they stand on their own, with vibrant fillings, hearty rices, and clean, cool sauces.

If you stop by, try a Fiesta Sampler ($6.50). With all eight of Beyond’s rolls represented, it the best option for newbies — and considering the cost of tepid store-bought sushi, it’s also a terrific value. The Haricat roll wraps black rice around grilled haricot vert and carrot chunks with a mango slice on top; the result is a tiny riot of flavors and textures, with an appealing crunch from the vibrantly green beans. In the Pickle Me roll, Vaknin pairs six-grain rice with burdock — a piquant orange root resembling baby carrots — pickled daikon radish, and avocado to pungent, bracing effect. Six-grain rice provides as much of the flavor of the subtle Sweet Tree roll as the avocado, sweet potato, and alfalfa sprouts; it’s the menu’s most understated item, and one of the most refreshing.

In all of Beyond’s rolls, the rice boasts exceptional integrity without getting gluey; the secret, Vaknin says, is to marinate the grains in water, “let them bloom,” and marinate again, continuously.

Vaknin claims that “90%” of his rolls are vegan; a couple include eggs, though he plans a fully vegan menu by summer’s end. And while his fare won’t be certified kosher or organic, he is sourcing some of his ingredients from the nearby Greenmarket at Union Square including cilantro, cucumbers and sprouts the day the Forward visited.

On a strip of downtown Manhattan that’s best known for less-than-salubrious dining options like a newly opened iHop and a 7-11 franchise, Beyond Sushi also sticks out like, well, a green thumb. But that’s the point. “There was nothing healthy in this area,” says Vaknin, who spoke to the Forward in his chef’s whites after a break from a weekday lunch rush.

Vaknin’s considering an expansion across the city, but slowly. “I can definitely say I’ve been more calm than when I was catering,” he says. But if Hell’s Kitchen called? “I would do it again,” he says. “In a heartbeat.”