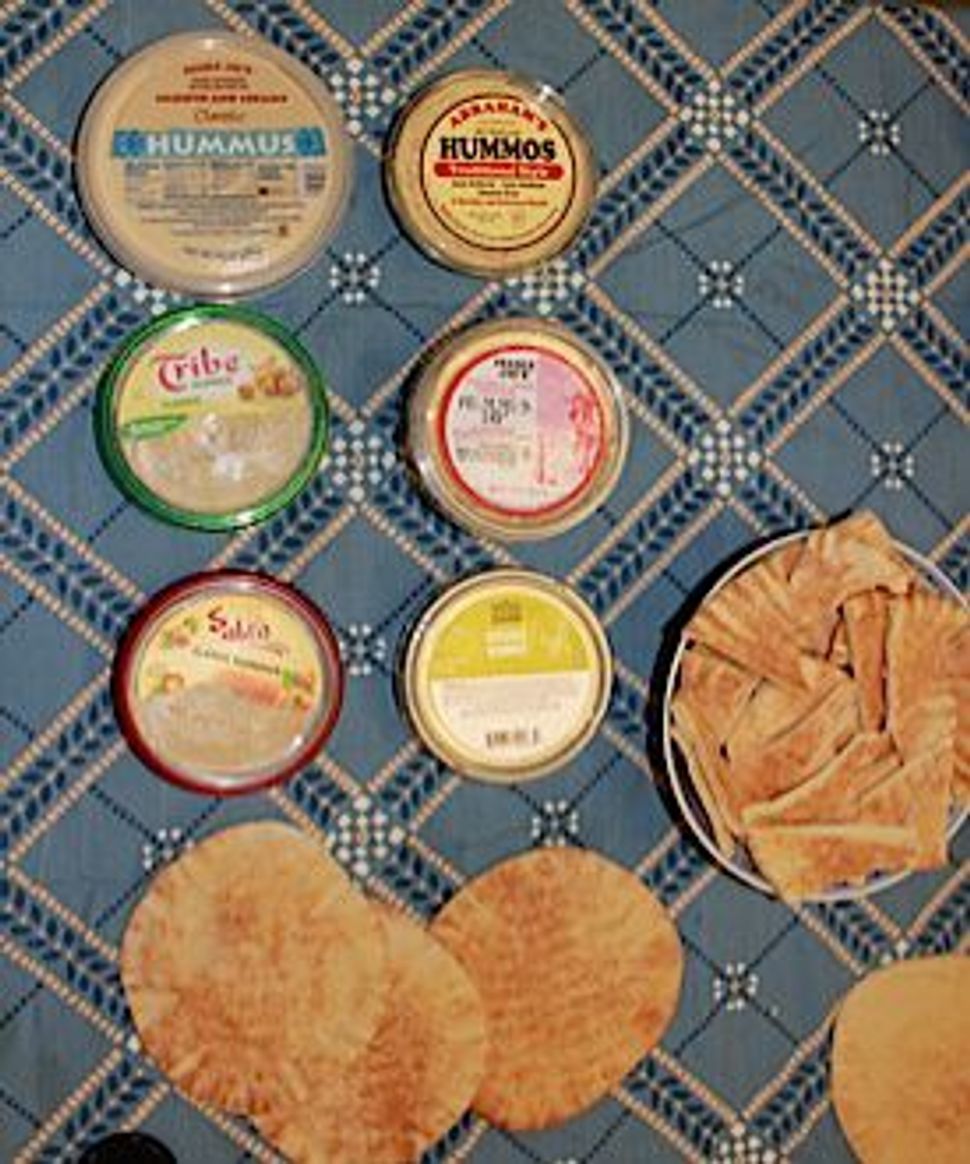 It seems, hummus is everywhere — and in every flavor. Even an innocuous trip to the corner deli leaves one dumbfounded.

Sabra boasts of 19 different flavors, with more on the way. Tribe follows with a close 16. Trader Joe’s, which sells an extensive line of house-brand hummus, offers three different versions of the original flavor, a hummus ground with edamame, and a special three layer hummus dip with cilantro jalapeno hummus and spicy hummus layered over the original.

Louis Fellman, the founder and owner of Abraham’s Natural Foods explains the hummus flavor boom as a relatively new phenomenon. According to Fellman, who has been making and selling hummus since 1985, the question he used to ask, “do you like hummus,” has morphed into, “which hummus do you like?”

On a recent evening at my local market — with $5 in my pocket, and eyes bigger than my stomach — I stopped in the hummus aisle to pick up a tub for the next-day’s lunch. I always go for my favorite: Sabra with Pine Nuts. But, as I reached past the five shelves stocked with hundreds of red-topped hummus tubs, my stomach and eyes began flitting excitedly through all the various labels. Luscious Lemon? Spinach Artichoke? Basil Pesto? And what about these small tubs of Abraham’s hummus that I see innocently sitting on the next shelf over? Could these be worthy of a spot in my refrigerator?

And so the idea for The Great Hummus Taste Test was born. I gathered together a diverse panel of Forward and Hazon staff to taste their way through 32 different varieties of hummus, all in the quest to determine which of these chickpea tubs were worth scarfing down on a nice carrot-filled summer evening.

We spread the testing over a week, and tasted for specific categories on different days, in order to give ourselves (and our palates) enough time to process all the zesty and intriguing flavors. We tested for the best pre-packaged Israeli-style hummus, sundried tomato hummus, spicy hummus, and the best freshly made hummus in New York City. And then, in the name of research, we tried 12 of the most unusual flavors we could find, in order to pick out which ones to buy and which to leave on the shelf.

We rated the hummuses based on their textures and tastes on a scale from zero to five. We took into account how they were presented, what they felt like rolling around our tongues, how the after taste sat with us, and whether it brought shivers down our spines that were reminiscent of the waves on a sunny day at a beach in Tel Aviv.

And so we dub this week “Hummus Week” — a week’s worth of reviews, rankings, ratings on this very important and palate-sensitive issue.

We’re kicking off the week with our insights on the best packaged Israeli-style hummus, because, as we discovered from our testing — original is the best. Almost always. Creamy, lemony, and deliciously addictive. 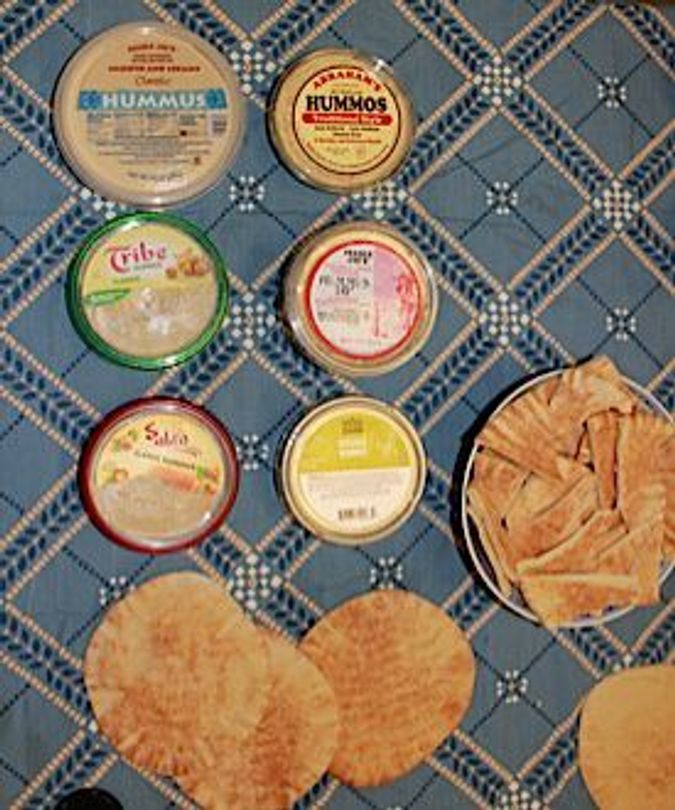 Why did Sabra win? Because it is good. Really good. The type of hummus that you think will only be a snack, but then ends up disappearing next to an empty bag of carrots. Smooth, creamy, and firm — Sabra’s traditional flavor has a tangy and deeply savory flavor. Yet, unlike many of the other wanna-be contenders, Sabra’s seasonings don’t overpower. A lone tester rebelled against the pack, and cited Sabra for being a bit too bland, with a texture that was a bit too creamy. Otherwise, almost of all of our 15 taste-testers agreed that this was their favorite. Hands down.

Packaged in a thin plastic container and wrapped in a green plastic sticker, something about this hummus just feels freshly made — as though a squadron of chefs stayed up all night whipping chickpeas and sesame paste together in the Whole Foods kitchen arena, in order to get this fresh, tangy, and smooth hummus into our hands the second we strolled through the store’s aisles. Though this is probably not true, we still enjoyed the illusion as we gobbled it down. This hummus is lemony and sweet — chock full of a thick strong tahini flavor, which one tester described as giving it a “chocolatey” element. Yummm

Abraham’s hummus stirred quite a controversy among the hummus tasters. While some felt that they could eat it all day long, others were not convinced. The reason for all this controversy? The texture. Thick and chunky, where most Israeli-style hummus is smooth and creamy, Abraham’s prides itself on its “natural-feeling” half-blended texture. Abraham’s uses apple cider vinegar instead of loading up on tahini. Though a healthy decision in the long run, this was not loved by all — especially the traditionalists in the room. As for the taste — it is rough and light, with a garlicky zing.

Trader Joe’s Smooth and Creamy (not to be confused with Trader Joe’s Original) is exactly what it says it is: smooth and creamy. But, at some points, maybe a little bit too smooth and creamy. The addition of guar, a thickener, brought this hummus out of the land of creamy, and into the land of firmness— reminding us of the texture of pureed tofu. But never mind the slightly alien-texture (i.e. the stalactites that formed at the crest of each completed pita dip), because the taste also leaves something to be desired. According to one tester, it was “a little chalky with a weird aftertaste. I could practically cut this into chunks!”

Though a master at weaving edamame and horseradish into their chickpea blends (more on that on Wednesday), Trader Joe’s can’t quite figure out how to get the original flavor down. With three different variations of the traditional style (Original Hummus Dip, Classic Hummus Dip, Smooth and Creamy) each one tastes just slightly off. The Original flavor is no exception—this hummus is a bit watery, with a strange slightly-sour aftertaste that begs for a fresh pita slice as a palate refresher.

“This is not a tribe I want to be a part of,” said one tester. Another tester gave it a simple “meh.” Something about Tribe hummus was consistently off, in all of our taste tests. This was never more evident than in their original flavor. It’s overly processed, chemical tang caused Tribe to score lowest on everyone’s totem pole. “I would prefer to eat the container,” one tester concluded.

This post has been updated to reflect a correction. It originally stated that Abraham’s does not use tahini in it’s hummus, which it does.