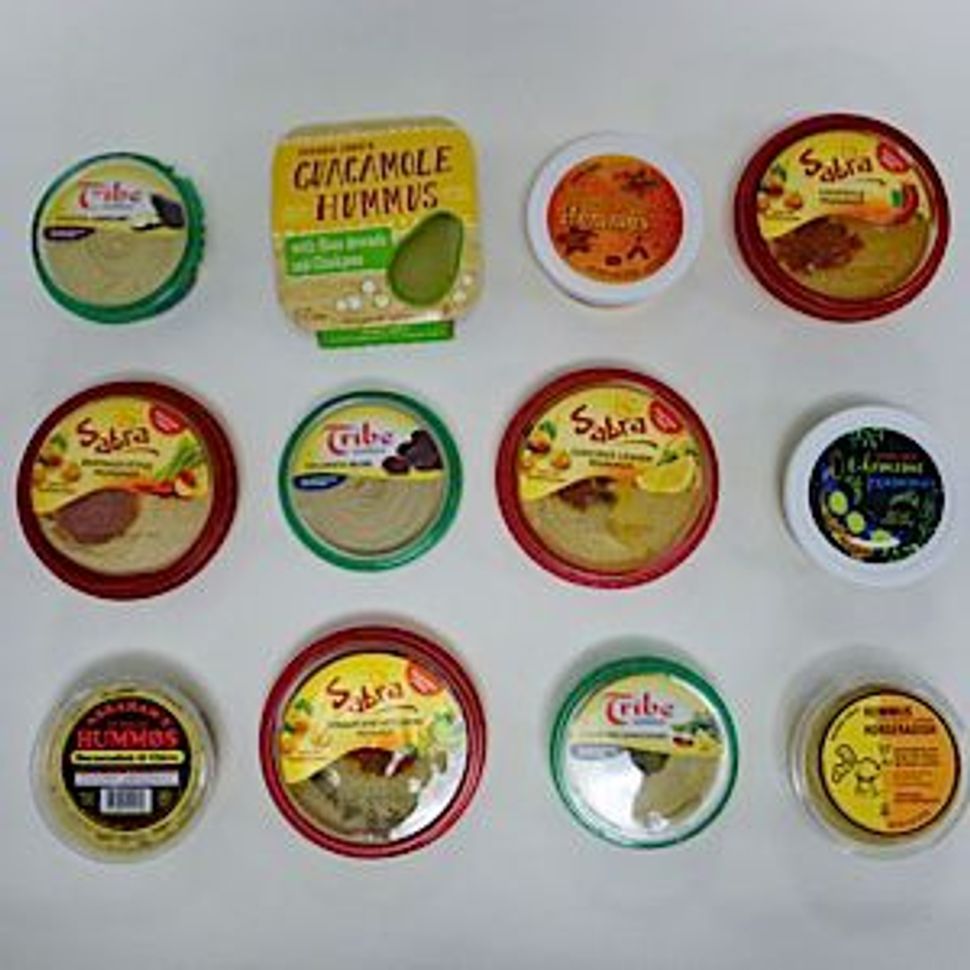 If you’re a hummus fiend — which I proudly am — you might have noticed a change in your grocer’s selection of hummus in the past couple of years. Suddenly, your options are no longer limited to just pine nuts or no pine nuts.

Welcome to the world of flavored hummus, where ingredients like horseradish, edamame, and guacamole rule the supermarket shelves, alongside exotic seasonings like chipotle and the bizarre buffalo sauce.

Ten years ago, you had to move the guacamole and salsa aside in order to find even just a single lame tub of hummus. It was probably Sabra, and it was almost definitely the original flavor. Cut to 2012 — Sabra now makes 19 different hummus flavors, and Tribe follows with a close 16. Whole supermarket display cases are devoted to the chickpea treat.

But is this latest crazy trend worth all of the hype (and shelf space)? We were curious. So we took it upon ourselves to try the 12 wackiest flavor of hummus we could get our hands on (we know, our jobs are tough). Check out our scores below to find out which flavors to take a chance on and which to leave at the store.

A note on scoring: Each hummus was rated on a scale from one to five based on texture, taste, appearance, smell, and the disparity between the ideal (i.e. fresh, juicy Kalamata olives in hummus) and the real (salty, stale, and overpowering).

I have to admit — we were hesitant, at first. The color and texture make this hummus look like a batch of fresh-out-of-the-can play dough. But, surprisingly, it was delicious. The taste was light and crisp. It had the perfect amount of saltiness, a rich chive note and was one of the few flavored hummuses that actually tasted natural. This was definitely the most successful attempt any brand had at hybridizing hummus with a foreign ingredient. We could definitely see ourselves serving this at a cocktail party with pride.

2nd Place: Sabra Chipotle
Score: 2.92
Sabra’s Chipotle beat out Trader Joe’s version of the same flavor (see below) by literally a hair — the two were .01 apart on our scoring totem. This pepper-inspired dish has a generally spicy flavor that doesn’t taste particularly like Chipotle per-se, but still has a nice unexpected kick and salsa garnish. One tester proclaimed it to be “Mexico’s gift to the Middle East.”

3rd Place: Trader Joe’s Chipotle and Cracked Pepper
Score: 2.91
Coming in just after Sabra’s version, this hummus couples subtle cracked pepper flavor with a strong Chipotle kick. It tasted a bit like salsa — spicy and tomatoey, with a little pepper hitting the tongue after the swallow. The grainy texture might have been its downfall. Not the best Trader Joe’s had to offer, but still respectable.

4th Place: Trader Joe’s Horseradish
Score: 2.5
Despite everyone’s scowls at the idea of this flavor, it was pretty good. Albeit, not everyone would try it, because of the painful Passover memories that it incurred — but from those that did, it received consistently positive scores. This hummus tastes exactly like what its name implies: creamy chickpeas blended with a strong, nasal-clearing horseradish. We just wish there was a tad more tahini mixed in.

5th Place: Tribe Kalamata Olive
Score: 2.3
I had high hopes for this hummus, given my love of olives (succulent, tangy, salty — what’s not to love?) Unfortunately, as most of the tasters attested to, this olive-flavored-hummus failed to taste, well, anything like that. Some liked the olive flavor, but I, as well as others, couldn’t get over the stale and chemically overpowering saltiness.

6th Place: Tribe Cilantro Chimichurri
Score: 2.2
Though Israeli-style hummus and Argentinean grilling sauce may be better friends than bedfellows, we commend Tribe for attempting such a nuanced flavor. Many Israelis, after all, spend quite a bit of time traversing the wilds of Argentina during their “self-discovery” year. The success of this hummus really depends upon your genetic predisposition to either like or despise cilantro. If you like it, then you’re golden. If not—beware, for this will taste like spicy soap.

7th Place: Sabra “Luscious” Lemon
Score: 2.0
Aha! Luscious Lemon Hummus. Sounds like the budget line for a shampoo commercial. Now, hummus is supposed to be lemony — in fact, a nicely lemony hummus makes for a delicious pita dipping companion. But, Sabra’s twist on the classic pulls a little too hard on the lemon, in the chemical sense. Most of us thought immediately of a strong lemon candy on first taste. While it is intriguing in its intensity, it is also, as one of our tasters put it, “not so luscious.”

8th Place: Sabra Spinach and Artichoke
Score: 1.96
Despite the tantalizingly delicious name of this hummus, it doesn’t really bring much to the table. More sour than sultry, the flavoring has a middling taste that brings a bad salsa to the brain. More egregiously — it doesn’t really taste much like spinach or artichoke. Disappointing, to say the least.

9th Place: Tribe Eggplant
Score: 1.92
We searched and searched but we could not find the eggplant in this hummus. What did we taste in its stead? Something vaguely sour with a strong lime undertone. Did Tribe perhaps confuse an eggplant with a Margherita? Seriously though, all jokes aside, where was the eggplant?!

10th Place: Abraham’s Horseradish Chive
Score: 1.7
As usual, Abraham’s delivers an incredibly chunky and healthy-tasting chickpea blend. But unlike the success of some of their other, less out-of-the-box flavors, this one just tastes funky. The sour and chive flavor tastes more like vinegary chickpeas than anything my grandma would ever serve at a Passover table.

11th Place: Trader Joe’s Guacamole Hummus
Score: 1.6
This continues to confuse us all. In a completely theoretical landscape, I can understand the impulse to create the best party snack ever by combining the tried and true dip-fellows: hummus and guacamole. But, it doesn’t work. At least, not here. It tastes like a slightly watery and flavorless guacamole, and, if I ate this blind, I wouldn’t even notice that there were chickpeas in it. One taster kept asking me if the guacamole had gone sour. As he said, “It has that ‘end of the party’ feel… but at the beginning.”

12th Place: Sabra Buffalo Style Hummus
Score: 1.2
This… hummus, if we are calling it that, tastes like someone poured ranch dressing, Cheetos and a bad cheddar spray cheese into a blender, pressed puree and called it hummus (we wish we were exaggerating here). The texture is oppressively thick and creamy and the overall experience left us wondering if maybe we should have foregone our pita squares, and used chicken wings instead. In which case, our bad.