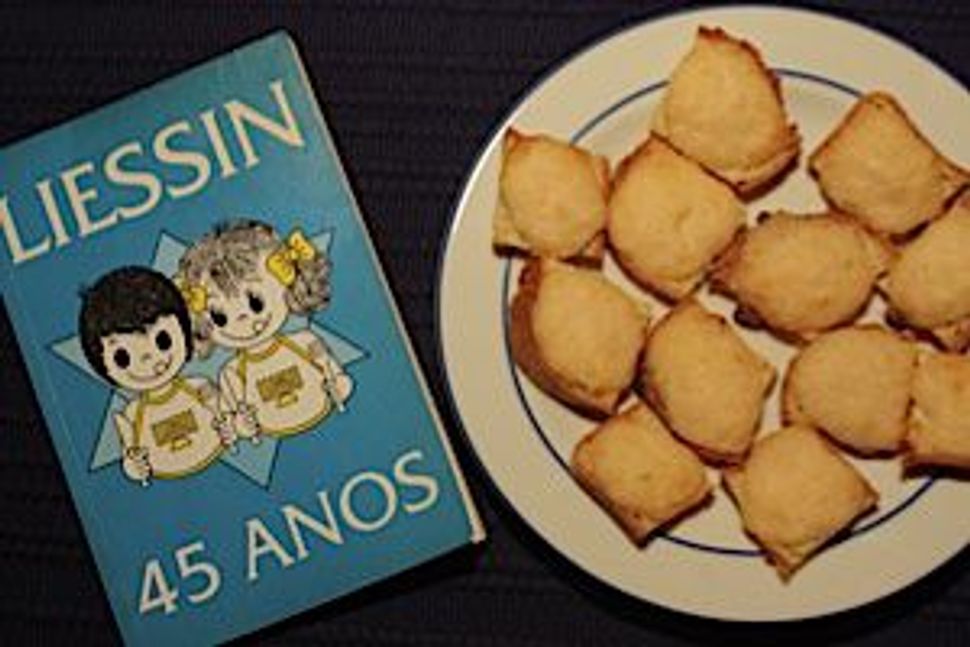 Family legend has it that, when my parents got married, my paternal grandmother hired the newlywed couple a maid. How sweet, thought my mother. That is, until she found out the maid also doubled as a spy so that my grandma could make sure her daughter-in-law — a shiksa! — wouldn’t buy bacon and other unholy treats for her son.

My mother was raised in a strict Catholic family in Brazil and married one of only 30,000 Jews living in Rio de Janeiro, a city with 12 million inhabitants. She knew very little about Judaism before meeting my father, but she came to love everything about it. Two years after a civil ceremony, my mother decided she wanted her children to be Jewish, not Catholic or “cashew.” She began the process of converting and at the end, my parents had a second wedding — this time, under a chuppah.

When time came for her to raise two Jewish kids, she put a great deal of effort into making sure they would grow up with the same affection towards Judaism that she had acquired. She would have meetings with our school’s principal to learn about why we had come home with a cardboard bow and arrow on Lag BaOmer or why we had asked her to let us sleep in a tent made of bed sheets in the balcony during Sukkot. She wanted to be a part of it, and she enjoyed being involved in every possible way.

Then one day I came home with a little blue book. It was a cook book with traditional Jewish recipes, compiled among my school’s parents and distributed to students that day. It had everything from sweet gefilte fish to cheese burekas, egg challah, chocolate babka and some other kosher-friendly recipes. She was in awe — she had already learned a thing or two from her mother-in-law, but now she had it all at her fingertips (this is a pre-Google story, people). My father, who couldn’t cook a pair of scrambled eggs to save his life, was never much help when it came to conquering that sphere of Jewish tradition, but now she could be fully in charge of things.

So the book immediately found its way to a drawer in the kitchen and would quickly become part of a new family tradition. Every Friday she would ask my brother and me to pick something from the cookbook, and then she would gleefully prepare it for the Shabbat dinner. She learned the recipes, many by heart, and I think she felt like she could finally be a complete Jewish mother — stuffing her kids’ mouths with delicious Jewish treats she had prepared herself.

She passed the book on to me when I got married, in the hope that I would finally venture into the kitchen to prepare something more sophisticated than microwave lasagna. And well, maybe I don’t have the time to cook every Friday, and maybe I have developed a weird craving for Chinese food on Shabbat, but every now and then — and especially whenever I miss her — I try something new from that old cook book. I take it as a good sign that my husband — who himself is in the process of converting to Judaism — hasn’t complained so far.

I’ve selected two of my favorite recipes from the book to share here. Bon appétit and Shabbat Shalom!

1) Slice the leeks in thin rings (aim for a third of an inch). Make sure to use the white part and only the good-looking, succulent leaves.

2) In a large pan, sauté the sliced leeks with a pinch of salt and a tablespoon of olive oil for two minutes.

3) After sautéing, add a cup of water in the same pan and cook the leeks for five minutes over medium heat. After cooking, drain the water using a colander.

4) To prepare the béchamel: in a saucepan, combine the milk and the egg yolks. Mix slowly and let it simmer. Add pepper and the nutmeg powder.

5) In another pan, melt the butter with the grated onions in medium fire for about four minutes. Add the flour as soon as the butter melts. Stir until the mix becomes consistent.

6) Add the warm milk and yolks slowly, waiting for the flour to “absorb” the mix. Stir constantly for 20 minutes over medium heat.

7) Add the gruyere cheese to the béchamel. Then add the sliced leeks and the chopped parsley. Stir delicately to preserve the leek rings. Wait for it to cool down — don’t start the next step until the mix has cooled down.

8) In a bowl, whisk the egg whites with a pinch of salt (tip: don’t add the salt until the very end of this process so that the whisked egg whites acquire the right consistency for the soufflé). Mix the beaten egg whites very delicately with the cooled béchamel sauce.

9) Use the cooking oil to anoint a deep baking pan. Throw in the mix and place in oven at 500F in a bain-marie. Baking time is one hour. (Tip to help the soufflé rise: especially if it’s a humid day outside, it helps to leave the oven half-open. Mom uses a small matchbox to keep the oven door from closing.)

1) In a bowl, mix the grated onions, the mayo and the parmesan cheese.

2) Cut off the crust of the bread slices. Cut each of them in four smaller pieces. Place the pieces neatly inside a baking pan.

3) Using a teaspoon, place a portion of the mix on top of each piece of bread.

4) Place in pre-heated oven at 500F and bake for 30 to 40 minutes or until golden brown. Serves two hungry kids who have just got home from school and will raise hell if asked to wait for dinner (or equivalent party)