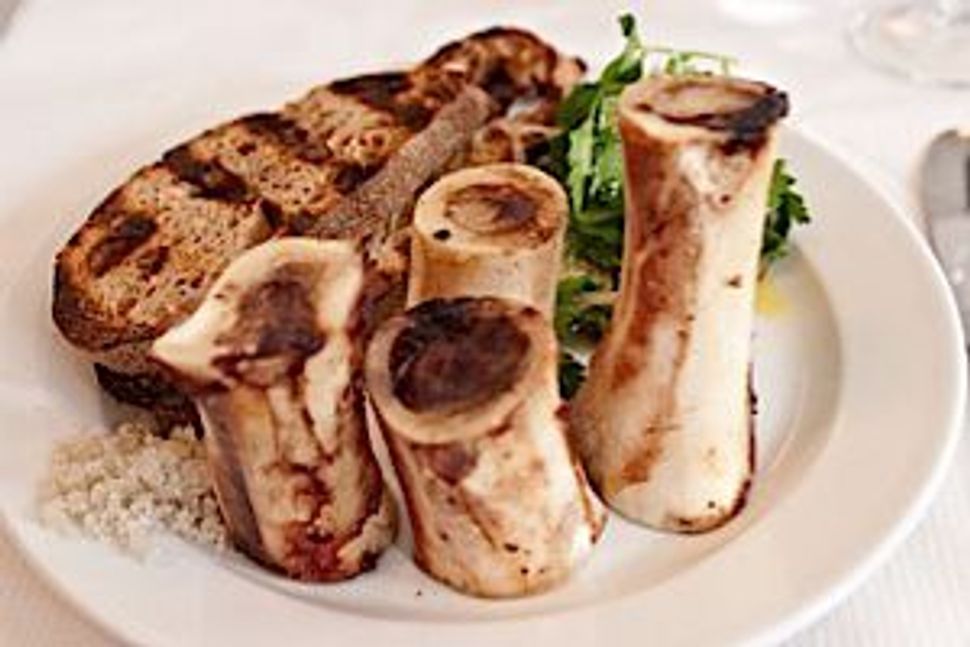 We hear the bone marrow appetizer is pretty darn tasty! Image by Thinkstock

After hearing (and reading) all the hype about how new, hip Soho restaurant Jezebel would rejuvenate, modernize, and make kosher dining “cool,” I had to check it out.

So on Tuesday night, my husband, two friends and I headed to the painfully trendy downtown New York neighborhood to check out what all the fuss is about.

There’s no sign outside the glatt kosher restaurant, and the only way to know you’re in the right place is to look down at the doormat.

Inside the two-story carriage house, the decor is a mix of vintage and shabby chic, with a little bit of humor thrown in — adorning the walls are paintings of Jewish pop culture icons like Woody Allen (who stands in for Jesus in a depiction of the last supper) and Barbra Streisand (as the Girl with the Pearl Earring).

We took a quick look at the downstairs bar and lounge area, and then headed upstairs to the formal dining room, where we were seated directly under a painting of Marilyn Monroe and Arthur Miller.

The food is not outrageously different than what you might find at other upscale kosher restaurants around the city, and some more traditional choices are available — like the Jewish Italian wedding soup ($16). But there are also some departures from the norm, like beef tartare ($23) and lamb agnolotti ($15). The jury is still out on whether kosher diners will embrace the less traditional choices.

Overall the meal was tasty, if pricey (the dinner for four — with appetizers, cocktails, entrees and shared desserts came to $440, including tax and tip).

But my favorite dish of the evening — and one that’s highly unusual at kosher restaurants — was the roasted bone marrow appetizer ($21). The perfectly cooked dish — two roasted open beef bones filled to the brim with marrow and topped with crunchy breadcrumbs — is served with parsley (the perfect light accompaniment to the heavy marrow), pickled onions and toasted bread. This is not a dish for light eaters — it is rich, hearty and meaty.

“The marrow was a good appetizer option that seemed like you don’t see on too many kosher menus. It has a lot of flavor and richness. We added the red wine braised brisket to complement the marrow and make it more of a dish than just bone marrow and toast,” Chef Bradford Thompson told me.

Though bone marrow has become a trendy menu item in many upscale New York restaurants, kosher diners may only be familiar with it as an added treat slurped up from inside the beef bones that flavor traditional chicken and beef-based soups — a favorite of Bubbys everywhere. While the dish isn’t always thought of as being Jewish, some say it was Eastern European Jews, living in Venice’s ghetto, who first introduced bone marrow into Italian pasta dishes.

Jezebel is setting out to turn Jewish food on its head by offering more luxe and refined choices than those usually found in kosher restaurants. No dish on the menu is more successful at achieving this than the marrow.

Trust us when we say it’s a nice departure from more traditional Jewish fare (you won’t miss the chicken soup, we promise) and a way to start the meal off right —we think even Bubby would approve.